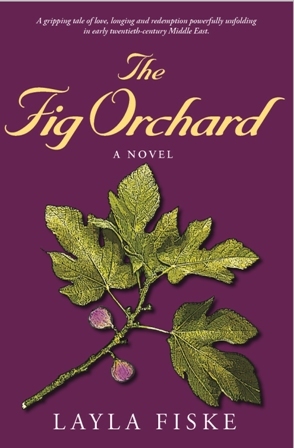 "What evil darkness has possessed a world once loved? No body left untouched; no soul found justly aggrieved. What beastly shadow has tethered its heinous will upon the ruins of mankind, as brothers lift up swords against brothers, and fathers raise hands against sons? For are we not all made brothers and sons in the righteous eyes of our Lord?" -- Layla Fiske, from The Fig Orchard

I love sitting down with a good book. Its pages absorb my worries, while my thoughts are transported to another place, another time, accompanied by some incredible new people who can reach across the paper and ink and bring me into their world. Sometimes the experience can be downright magical, as was the case with Layla Fiske's debut novel The Fig Orchard.

Fiske tells the story of Nisrina, and her love Jabran, across ages and lands, borders that are created by men and wars, joy and tragedy and most of all, their undying devotion for each other. Alright, so far so good. But the true beauty of Fiske's writing lies not only in the story she tells, a spellbinding and turmoiled tale of Palestine and its people at the turn of the century -- much before the 'Nakba' -- but in the way she tells it. With care and warmth, through lavishly formed sentences that allow the reader to smell the bread baking in the oven, cower with fear at the Ottoman soldiers' cruelty, and all the while feel, feel, feel. I love a work of art that makes me feel, and also manages to teach me something I didn't know before. The Fig Orchard is all that, and more.

I caught up with the ever-gracious Layla Fiske via email, our connection strong even though we're separated by lands, oceans and miles upon miles. Yet her warm ways, her delicious hospitality and her wisdom reached out to me from San Diego, where she is based with her family. I share here our wonderful "conversation".

What was the precise instant when you knew you had to write The Fig Orchard?

Layla Fiske: Wow. The precise instant? Hard to say. My grandmother, who was the inspiration of this novel, emigrated from Palestine when I was eleven months old. She lived with my family. She shared a bedroom with my sister and me. I really have no recollection of life before her. The essence of who she was, is now a part of who I am. And looking back, it seems that my need to write this story was always with me -- emerging from the spirit and strength she radiated, the care and love she showed me, and the stories of her life that she shared. Ironically, it wasn't until my children were grown, and my working career complete -- when the chatter of the world had ceased, and my mind had calmed -- that I could actually sit and write the story; and once I began, I couldn't stop.

Your book takes place in a very different place, and a different time. Palestine, in the years leading up to WWI. It's also such a different situation for the country and its people, one that cannot even be imagined today. Can you talk about how it was for you to immerse yourself in that time and place, but also how much historical research you had to do, to get it just right? 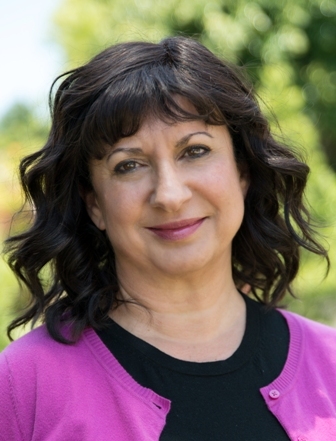 Layla Fiske: Immersion is a good word. I usually found my mind most active at 3 a.m. I would wake with thoughts and sentences and story lines, vivid conversations racing through my head. I'd rise and go into a separate bedroom, close the door, sit at a small desk facing the wall and write. Most times I wasn't sure where the words were coming from, they just flowed. I felt them, smelled them, tasted them. I relied heavily on my upbringing. As the daughter and granddaughter of immigrants, the culture was instilled in me from a young age. It's funny, whenever we want to make a point, we say, "There are two kinds of people..." So, here I go: There are two kinds of people -- those who live life, and those who observe it. Whether it is good or bad, I have to admit that I am the latter. Sometimes I wish I was someone who could live in the moment, enjoy life, take things as they come; but, I am not. I am an observer of life. I do believe, however, that "observers" make good writers. Even as a young girl, I found myself consistently observing others. The elders. The relatives. The Palestinian friends of my parents who came to visit. I was fascinated by their mannerisms, their speech patterns and their way of expressing themselves both in Arabic and English. Even the simplest of things intrigued me, like how they held the tiny Turkish coffee cups between their thumbs and forefingers, and the sound they made as they inhaled the dark, thick coffee. I drew on these memories when creating the characters of the book. And of course, I did quite a bit of research to get the historical aspects right. The geography, maps, photos from the era, dates of wars, battles, diseases; the impact the Quakers had on the Palestinian society by establishing "Friends" schools throughout the region. I had books opened and spread across my dining room table for months at a time.

Which bits of you are in which of your wonderfully rich and complex characters in The Fig Orchard?

Layla Fiske: There is probably a bit of me in each of the characters. I think that can't be helped. As a writer, I think it's hard to separate one's self from the characters you create. They are birthed in our minds, nurtured through our imaginations, and fed through our life experiences. What we, as individuals, choose to do with those traits is what ultimately determines who we become as adults. Like Jabran, I have the strong desire to always do the right thing, but live a simple life, away from the fray. I possess the strong, exacting nature of Mona; the desire for truth and strong familial responsibility of young Essam; and finally, and most importantly, the determination to step beyond what others expect of me, as Nisrina ultimately learned to do.

I thought I knew about Palestinian history and culture and yet, from learning so many important facts in your book, I realize I knew very little before The Fig Orchard. Did you set out to give your readers a little learning with your novel?

Layla Fiske: Yes. So much of what the American public hears about Arabs and Palestinians are in negative terms. The media is inundated with stories about terrorists, political conflicts, and social unrest. And justifiably so, as that is a major part of what is happening in that region today. That is what makes headlines. However, I wanted to take the reader on a journey to a time and place when things were different -- to know the Palestine that I experienced through my father's and grandmother's stories. I wanted readers to experience what life was like in the early twentieth-century, when that part of the world was diverging from the Turkish-ruled Ottoman Empire, through World War I, and beyond. I wanted the reader to experience life through the eyes of a simple, peasant woman growing up in the Holy Land before, during and after the First World War. To learn the culture, the food, the challenges and limitations placed on women in that era, and how they were (and still are) slowly rising above it.

What is your own background?

Layla Fiske: I am an American-born daughter of Christian Palestinian parents. My father and grandmother were born and raised in Ramallah on the West Bank of the Jordan River. My mother was born in America, but her father was also from Ramallah; her mother was born in northern Syria. My parents raised me with their "old-world" values. Some good, others not so much. Higher education for women was something they did not support. Luckily, I was a child of the Sixties, and teenage rebellion was raging in that era of American history. I valued an education beyond all else, and insisted and fought to attend a local university by working full time, paying my tuition and ultimately graduating with honors.

Why The Fig Orchard, as your first novel? Would it not have been "easier" to write about modern-day Palestine and have Nisrina be a 21st century heroine?

Layla Fiske: In some ways it might have been easier to write about a 21st century heroine. But for me, the era I chose was a reflection of the stories and heritage that I hold dear. The inspiration for the novel was my grandmother and her life as a widowed midwife in Ramallah, supporting and raising her children on her own in an era where that life-track was rare.

What do you hope your reader takes away from your novel?

Layla Fiske: I hope my readers walk away with an appreciation and understanding of the Middle Eastern culture and its history. The hospitality, the foods, the language, and the fact that there are many faiths that make up the Arab identity. I would like my readers to be able to connect to the humanity of the Arab people. And finally, I would like my readers to understand and appreciate the plight of women throughout history and particularly in that region. How difficult it is to overcome the negativities of a culture while one's identity is a part of that culture. How prejudices take many years to slowly change and are evolving still.

Your favorite part of writing?

Layla Fiske: I love creating the characters. Spending time with them and watching them grow. I am always amazed at how the story seems to write itself, and how the twists and turns of the plot surprise even me.

The part of this journey, from writing to publishing your novel, that you would have rather done without?

Layla Fiske: I have to admit, I do not enjoy the "business side" of publishing. I could definitely have done without that. But on a positive note, I have learned a lot, and, of course, still have more to learn.

And finally, three words that describe you?

All images courtesy of Layla Fiske, used with permission