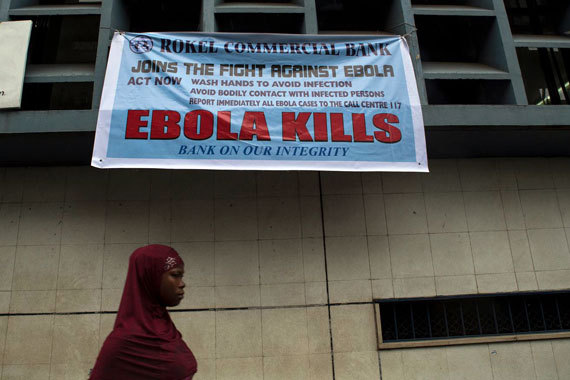 As the spread of the Ebola virus in West Africa shows, the importance of reducing inequality could not be more clear. The battle against the virus is a fight on many fronts -- human lives and health foremost among them.

But the fight against Ebola is also a fight against inequality. The knowledge and infrastructure to treat the sick and contain the virus exists in high- and middle-income counties. However, over many years, we have failed to make these things accessible to low-income people in Guinea, Liberia, and Sierra Leone. So now thousands of people in these countries are dying because, in the lottery of birth, they were born in the wrong place.

If we do not stop Ebola now, the infection will continue to spread to other countries and even continents, as we have seen with the first Ebola case in the United States this past week. This pandemic shows the deadly cost of unequal access to basic services and the consequences of our failure to fix this problem.

The virus is spreading out of control in Guinea, Liberia, and Sierra Leone. As a consequence, our ability to boost shared prosperity in West Africa -- and potentially the entire continent -- may be quickly disappearing.

Under the Bank's best-case scenario, Ebola will cause the loss of hundreds of millions of dollars in economic growth in the affected countries. This is a critically serious matter. These states are emerging from years of civil war and strife, both of which contributed to their low levels of per capita income. Growth is therefore essential to easing the horrible conditions in which millions of their citizens live. If the pandemic continues to jump to other countries, the growth lost could climb into the tens of billions of dollars or higher. So, unless we stop the infection's spread now, there will be little prosperity to share, to say nothing of the number of people who will be unable to partake in what remains.

The world's response to date has been inadequate, and it has been painful to see us replay old failures from previous epidemics.

At the turn of the century, HIV had infected an estimated 24 million people in Africa. While effective treatments for the virus existed for rich people, low-income people on the continent did not have access to them because of a failure of imagination and low aspirations for the poor. Some global health experts believed that providing effective HIV treatment to low-income communities was too difficult and would cost too much. Yet today, more than 10 million poor people worldwide are being treated for HIV.

We have made similar mistakes when it comes to combating Ebola in West Africa, even though we received repeated warnings from governments of the affected countries, Médecins Sans Frontières and others. So now, we're playing catch-up.

To determine how we could contribute to a coordinated response, the World Bank Group identified infectious disease experts who have on-the-ground experience implementing complex containment and treatment protocols in low-income countries. We sent them to Guinea and Liberia. Based on what they saw, they have told us that, if we make an enormous surge now, we can treat the sick and contain the virus. The infrastructure we need is not that difficult to build and we have protocols to limit the infection's spread. Most importantly, they have told us that further delay will make an effective response exponentially more difficult.

We're now moving quickly to do our part. The World Bank Group has transferred $105 million in emergency funding to Guinea, Liberia, and Sierra Leone to ensure their governments have cash to purchase equipment and services essential to fighting Ebola. Overall, we have pledged $400 million to support treatment and containment. And we have devoted our considerable analytical resources to show that acting now will save hundreds of millions, if not tens of billions of dollars.

Other parts of the coordinated global response are also taking place. In the last few weeks, we have seen significant action from President Obama and the United States; the British and French governments are also stepping up their efforts.

Still, because of the epidemic's scope and rapid growth, more progress is needed. If the worst-case scenario comes true, and the CDC's estimate that as many as 1.4 million people could become infected, the virus' impact will be truly global.

Concerned citizens need to demand immediate deployments of capital and human resources to the affected countries. Otherwise, thousands more will die needless deaths and an economic catastrophe may take place.

Don't miss our special series in recognition of the threats posed by Ebola, particularly to West Africa. To see all the posts in the series, read here.