Libraries in Miami are in the final stages of an incredible budget fight. It's been a pitched battle between library advocates and a Mayor who has repeatedly slashed library funding, tried to eliminate library jobs, and worked to eliminate library branches and limit services. In many ways it is a microcosm of the larger fight for libraries across the Unites States. It will hopefully be seen as a turning point when our citizens demand more from their elected leaders and the social fabric can be rewoven.

Miami-Dade Public Library has a history as an award-winning and thriving public institution. In 2008 it won a National Medal for Museum and Library Services and as recently as 2009 it was opening new branches and renovating older ones. Starting in 2010 however it began to see its budget cut dramatically and hours, services, and materials all suffered. Last year Mayor Gimenez proposed closing 22 of the 49 branch libraries across the system.

Take a moment to let that sink in. The public library in Miami, one of the great cities of the world, was going to be cut in half. To hell with the kids, the entrepreneurs, and the people trying find work and improve themselves. To hell with ESOL and academic support, to hell with hours of operation which are convenient for working families. To hell with a public institution which is so effective it returns $10 of value for every dollar put into it. To hell with the library in a city which has been the scene of entire artistic and social movements, a city which is the topic dozens of songs and the setting for thousands of books.

The people of Miami were not crazy about the idea either. Public outcry forced Mayor Gimenez to keep the libraries open (with limited hours and reduced services). These proposed closures set off a massive library advocacy movement in Miami, a movement which continued to grow and evolve even as they were working to put pressure on public officials. 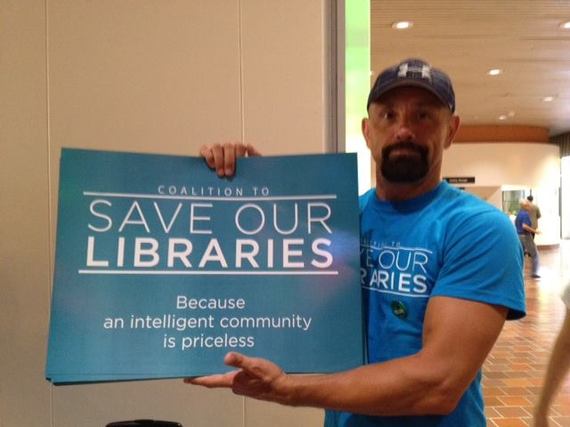 photo courtesy of Coalition to Save Our Libraries

This is when local advocacy mobilized, consolidated, and kicked it into high gear. Coalition to Save Our Libraries are an incredibly intelligent, energized, and motivated library activists. In full disclosure Lauren Comito from Urban Librarians Unite and John Chrastka of EveryLibrary went down for some brainstorming and training early on but these volunteers took everything they had to say and ran with it.

This is just beautiful grassroots stuff. They have people at every public meeting, they are handing in stacks of petitions 2-3 feet high, they have an incredible level of student engagement. Coalition to Save Our Libraries is inspired and inspiring. At one recent event they had so many volunteers show up for a public meeting they jammed the escalator, that is an awful lot of boots on the ground, a lot of voices speaking up. This is a community which has put its foot down and said "no, enough, no more cuts to service." 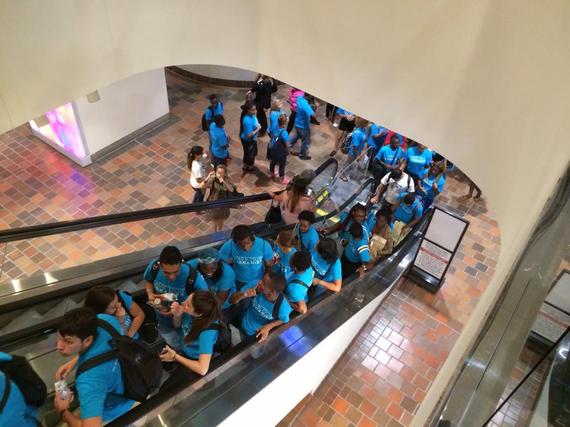 photo courtesy of Coalition to Save Our Libraries

That's why this is a watershed moment for library funding in America. On the one side we see a political figure toeing the line with the same tired tune of "no new taxes" another "shrink government" public leader, set against a population which is demanding more from their government. Miami has a complicated history when it comes to taxes and public services. At the same time that leaders were slashing the library budget they were subsidizing stadiums for numerous highly profitable professional sports teams.

This practice is still going on with recent talks for a new soccer stadium which Gimenez is very excited about and discussions of massive tax breaks for the Miami Dolphins. Meanwhile the library, a community resource open and serving all, has had it's budget cut by $25.8 million and the library millage rate has been reduced 55 percent while the countywide millage reduction has only been 2.78 percent.

All is not lost, far from it in fact. On July 16th the County Commissioners voted to increase the property tax slightly, a move which would give the libraries a budget of approximately $52 million, roughly the same budget as this year. It's short of what experts and advocates were looking for but it breaks a cycle of cuts and will maintain public service and avoid layoffs. This decision is still up in the air however. The final budget vote will take place on Sept. 18th.

How will it break? Will the elected officials of one of America's greatest cities shoulder the load and make the hard decision to create government that benefits the voters and residents that they represent? The people of Miami have made their voices heard, will their public leaders listen to them?

If you would like to get involved and have your voice heard please go to the Coalition to Save Our Libraries and show your support.