When I heard that the Southeast Louisiana Flood Protection Authority-East had filed lawsuit against 97 oil, gas and pipeline companies, I, as the founder of Levees.org, urged our board to immediately and publicly support the suit which demanded that the energy industry fix the coast that it helped destroy. The lawsuit's objective was consistent with our mission; that New Orleans flooded due to poorly designed levees and floodwalls, and also due to the ongoing loss of protective coastal wetlands.

Since last July, we traveled extensively to Baton Rouge, worked to build coalitions and launched multiple pro-lawsuit campaigns to counter Governor Bobby Jindal's dual-pronged attempt to halt the lawsuit. First, the Governor had tried stacking the Authority with commissioners who agreed with him, and then later, he apparently directed the Louisiana legislature to pass bills with the intended effect of killing the lawsuit. We fought both initiatives. 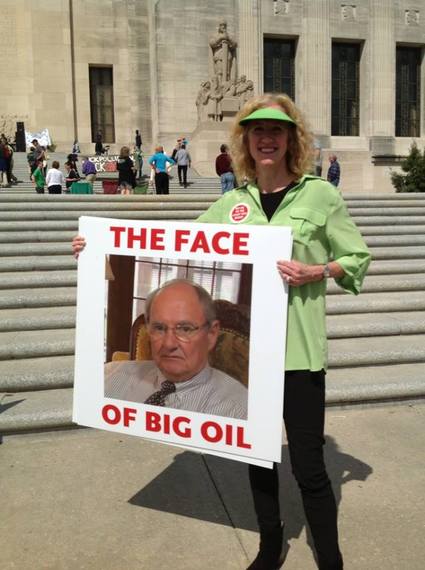 Levees.org also traveled from New Orleans to Benton in north Louisiana to picket the district office of Senator Robert Adley, the architect of at least five bills aimed at killing the suit by altering the legislation that created the SLFPA-East. It was Levees.org that put Senator Adley's face on a placard with the words "the face of Big Oil."

Regrettably, the Louisiana legislature passed a bill, Senate Bill 469 (now Act 544 of 2014), which may not only halt the lawsuit, but which also may give BP a legal loophole to deny millions in claims by state agencies for damages stemming from the 2010 Deepwater Horizon disaster. Governor Jindal signed the bill despite warnings from over 100 law experts about those unintended consequences, and despite a courageous recommendation from Attorney General Buddy Caldwell to veto the bill.

In the coming days and weeks, the Attorney General is likely to weigh in on three issues. Caldwell must determine if the term held by SLFPAE commissioner Paul Kemp (who supports the lawsuit) has expired, an opinion that could result in dismissal of the lawsuit. Second, if there is a legal challenge to Act 544 on constitutional grounds, Caldwell must decide if his office will defend it. Finally, if the SLFPAE lawsuit is dismissed, the AG must decide if his office will take up the claim against the oil and gas industry to force the industry to the table to discuss a settlement.

It is our hope that AG Buddy Caldwell continues defending the constitution and the law, and continues his stand against Jindal, Adley and Big Oil.

Part of the reason we are at this juncture today is because there remains much confusion over what a levee board is and what it does. For example, Rep. Gordon Dove erroneously said that levee boards were created to build levees, not to file lawsuits. In New Orleans, only the Army Corps of Engineers is authorized to build federal flood protection levees. Legally, the levee boards must maintain completed structures and collect the tax monies to do that as necessary.

We also heard our legislators say that the levee authorities were created to "insulate the board from politics" by removing the Governor's influence. This was repeated as conventional wisdom even though there is no evidence that any past governor's appointments of commissioners had anything to do with the levee breaches.

Nine years after Katrina, the focus is still too often on imagined causes of the flood instead of the proven ones. The major studies published since 2008, including the Corps-sponsored investigation, conclude that the Corps made a series of costly and deadly mistakes due mainly to following its congressional mandate to implement the least expensive alternatives.

The studies conclude that the Army Corps of Engineers is responsible for the levee breaches during Katrina, and show that the actions of the levee boards were not relevant. Yet Levees.org supported creation of the post-Katrina Flood Authorities.

The legislation calling for one "super board" of commissioners to replace the boards of a half dozen greater New Orleans-area levee districts was the brainchild of the New Orleans Business Council. The Council then provided support to Citizens for 1 which successfully lobbied for the legislation.

The bill had three sensible goals: 1) remove distractions, 2) replace parish control with regional control and 3) require professional expertise for its commissioners. Our position was that this new paradigm of levee board governance might better allow levee commissioners to hold the Corps' feet to the fire. All of us had found -- in the harshest way imaginable -- that we could not trust the Corps to properly build levees.

The Flood Protection Authorities East and West, created in 2007, are in place to do, what they are able, to assure that the Corps does not make the same sorts of mistakes it made pre-Katrina. And the fight continues, not just for sustainable flood protection, but also to hold the energy industry responsible for its damage to our natural wetlands infrastructure.

And now, near the ninth anniversary of the worst civil engineering disaster in our nation's history, Levees.org continues to exercise its role in holding all parties accountable by speaking widely with the vetted facts.