I've lived in Panama for less than a month, and I've already become quite familiar with its celebrated golden frog. 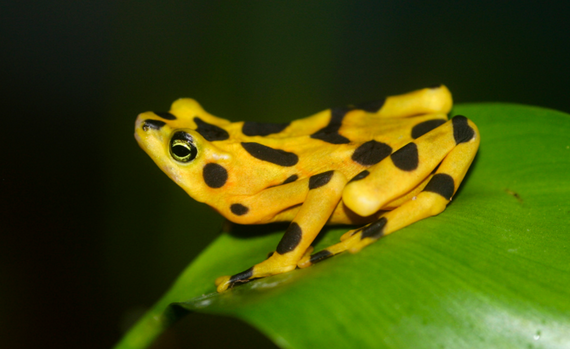 The little yellow guy is all over t-shirts and postcards and souvenirs. He's stamped on lottery tickets and grinning above the entrance to the aptly-named "La Rana Dorada" restaurant in downtown Panama City. Archaeologists have even discovered ancient gold relics sculpted in the shape of tiny amphibians.

I asked both locals and scientists what the frog means to them; why you see its iconic face everywhere.

"We're taught in school that it's a symbol Panama's biodiversity," journalist and entrepreneur Alfonso Grimaldo said. "It's a natural light; a reminder that the earth is sacred," said agriculture student Ericka Quiroz. "They were everywhere when we were kids; we used to catch them from the drain pipes," designer Ani Dillon recalled.

Known for its striking day-glo coloring and the adorable waving motion it makes with its webbed hands, the golden frog represented hope and resilience and the enduring power of life for generations of Panamanians. But now, it signifies just how delicate that life can be. It's been extinct from its natural habitat since 2007.

"Growing up, the golden frog was a source of pride for our country," Dillon said. "Now it's a reminder of what we've lost." 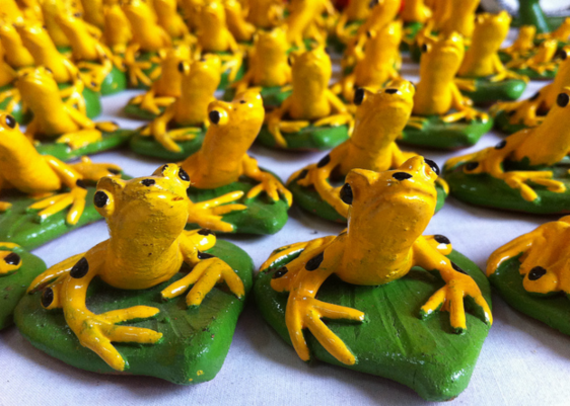 Over the course of the past decade, a deadly fungus caused by increased global trade routes completely wiped out most of the earth's population. "It's not a natural extinction event," Dr. Joe Mendelson, a biologist who has been studying the frogs for years, said. "Humans unwittingly caused these frogs to disappear, and we have a moral obligation to bring them back."

The golden frog played an important role within its ecosystem in the rainforests of Panama and Costa Rica. Tadpoles sucked up invasive algae from streams and rivers, keeping the water's oxygen content at balanced levels. Adults served as a hearty food source for snakes and other predators. They also gobbled up insects, which helped protect crops and limited the spread of certain diseases.

"Frogs are the unsung ecological heroes of those forests," Mendelson said. "They are way more abundant than you think; they sit there and eat insects every night, and then they act as the food base for everything above them."

Mendelson added that the frog's disappearance from its natural habitat serves as a grave reminder of the impact humans can have on the environment, as global trade forces undoubtedly contributed to the spread of the fungal disease. Frogs are known as an "indicator species," since they're one of the first to be impacted by human behavior, signaling more destructive events in the future. 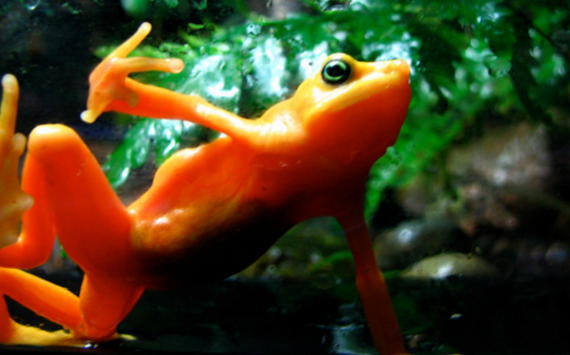 "We're moving pathogens we didn't know existed," he said. "We're doing huge damage and we're oblivious to it. We introduced this thing into Central America and caused all kinds of problems."

Zoo Atlanta, where Mendelson works, is part of a coordinated effort among groups of conservationists throughout the United States and Panama to bring back the frog. These scientists are breeding them in captivity and sharing their findings with one another in the hopes that they'll eventually be able to safely reintroduce the species back into the wild. Meanwhile, other experts are scrambling to determine a way to eradicate the deadly fungus from their habitats.

In the mean time, Mendelson cautioned that globalization and its resulting effects on climate change could create an environment that's ultimately even more hostile to tropical amphibians. "These frogs need places to live; they need natural forests to persist in and play their role," he said. "If Panama raised its temperature, this frog would have a lot of trouble, regardless of the fungus."

Still, Mendelson and his colleagues firmly believe that a collective shift in environmental consciousness will allow for their efforts to ultimately prevail.

"It's possible for us to be good environmental citizens; to pay close attention to carbon emissions and alter habitats minimally and responsibly," he said. "If we all do our part, researchers can focus on getting this frog back where it belongs." 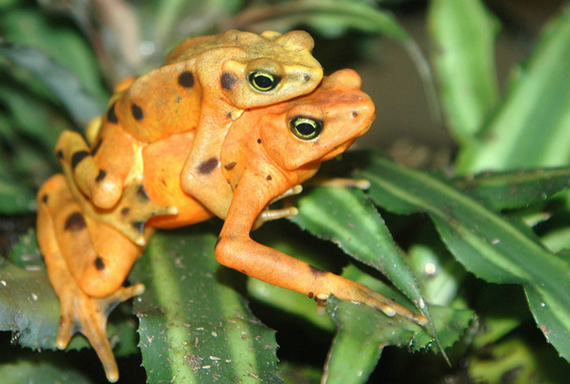 Learn more about the collective effort to save the golden frog here. Photos courtesy of Flickr creative commons.