After the first leg, I thought the FedEx Cup, the PGA Tour playoffs, really sucked and after the second, I said it was getting kinda interesting. Then, on the eve of the Tour Championship, I mentioned it might return to suck. Now the third edition of the FEC is complete. And the final verdict? The system is still mired in suck -- but this weekend's results saved it this year. 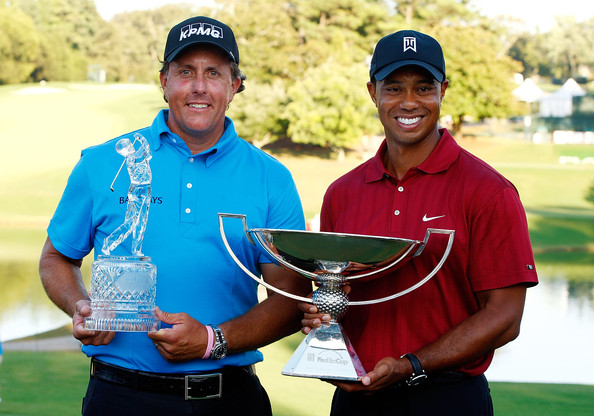 When the world's number one and two, Tiger Woods and Phil Mickelson, are both hoisting trophies at the end of the day, it's a good day.

Tiger and Phil deserve praise for playing in all four events. Until this year, Tiger had only played in 3 of 4 (and skipped the Tour Championship in '06) because, well, he doesn't care about the FedEx Cup; he cares about winning tournaments. But he stepped up to help the Tour. As a favor.

TV ratings revealed an 83% increase in Sunday's telecast from last year when Tiger wasn't playing and Vijay Singh had already won the FEC before the Tour Championship began. But did people watch because the winner of the FEC had yet to be determined? No. It was simply because Phil played beautifully and Tiger was in contention. But even if Tiger and Phil were in an 18 hole playoff where the winner gets $10 million dollars and the loser gets tazered on the green and has to sit out the 2010 golf season, it's still never going to beat the NFL in ratings.

No doubt this year's FEC culminated on a successful note. But the bottom line is the points system is very flawed. Though the commentators frequently posted "what if" scenarios and tried to explain the system as much as possible, it's doubtful the average fan really cared or understood. And if the players don't get it either, that's a bigger problem. Even Phil, who usually seems to know it all, said:

We just have to keep explaining it, I think, and gradually people will want to spend more time, go on line and study it and evaluate the different point configurations in tournaments, three different sections of the season.

Aside from losers like myself, no one wants homework to prepare for watching a sporting event. And it's not a system that people can grasp after a 30 minute study sesh.

And imagine if Marc Leishman had won the Tour Championship? Even if Tiger still won the FEC, nobody would have cared. Don't get me wrong -- I'm not disappointed by the final results. Phil and Tiger in the winner's circle is a fantastic way to end the season, but that's a rarity. Sadly, this year's perfect ending could hinder the FEC from making the necessary changes it desperately needs if it ever wants a devoted, mainstream golf following.

Stephanie Wei graduated from Yale, lives in NYC and blogs about golf at WeiUnderPar.com