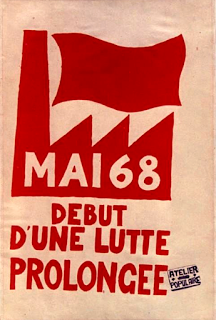 There is a theory that children try to outdo their parents at their parents own game. For instance the daughter of the well-known liberal lawyer Leonard Boudin, Kathy Boudin, a member of the Weather Underground, spent 22 years in prison due to her involvement in the Brink's robbery. If you apply this same principle to the presidency, you might say that a liberal president will beget a more radical constituency with a more conservative leader giving way to a correspondingly moderate following. Of course, by the same logic, a right wing president might produce a generation of neo-fascist followers, which is what some fear in relation to the Alt-right and the Trump administration. But, in general, it's more that there's a political thermostat which shifts back and forth in increments from one direction to the other. "You don't need a weatherman to know which way the wind blows," is the famous Dylan line. Radicals lower their sights when they hear Donald Trump make a statement like the one he made to MSNBC, "Let it be an arms race" and turn into mere liberals. Instead of trying to wrest control of industry from hedge managers, today's protesting students may find themselves content to limit the production of nuclear warheads. In essence, a whole new generation of potential rabble rousers may find themselves on the defensive having to fight the battles of the 50's (like doomsday and nuclear night) before even beginning to engage equally pressing issues like economic inequality, healthcare and free trade.