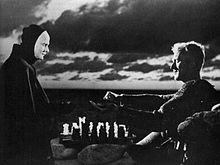 It's easy to see why the Russians wanted Trump over Clinton and why they went to the trouble of hacking the election. First of all in the most obvious way Trump is willing to play ball, to treat international politics like the famous chessboard between the Knight and Death in Bergman's The Seventh Seal. He'll support Assad if he thinks that's the road to defeating ISIS and will appease the Russians on the Ukraine (and eventually even the Baltic states), if he determines it's going to win a few other prizes. Kim Jong-un will probably also open the door since Trump is value-free and unlikely to meddle (and maybe the president-elect will even cause a new hotel to open in Pyongyang). The other reason is tangential and relates to Trump's attitude about human rights. For all intents and purposes, Trump is the epitome of realpolitik. He has little use for the central underpinning of American democracy which emphasizes due process. The means are always justified by the ends---something which flies in the face of the Enlightenment philosophy on which American democracy rests. Remember that Nixon was responsible for opening the door with Communist China. Hindsight is 20/20 but could we assume that Mao like Putin was looking for an alliance with America that might be beneficial economically but would not carry with it the baggage of human rights. Who could be more anathema to Russian autocracy, on this issue and the issue of imperialism, than Hillary Clinton?