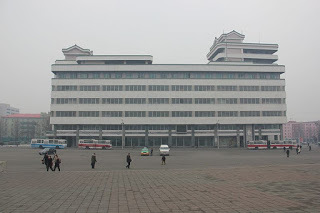 Now that Nordstrom has gotten rid of Ivanka Trump's line, she should seriously consider Pyongyang's Department Store No. 1, which is one of North Korea's leading retail outlets. If Putin likes Trump, one can only imagine how Kim Jong-un feels and there aren't going to be any problems with the North Korean equivalent of Kellyanne Conway getting on television to "trumpet" Ivanka's business. In North Korea there are none of the ethical scruples you have in Washington, particularly when the supreme leader is inclined to a particular fashion line. If by some turn of fate Mr. Jong-un's wife, the fashionable Ri Sol Ju, who is looked at as the Jackie Onassis of North Korea, were to take a liking to Ivanka then her line would be a big drawer in Pyongyang Department Store No. 1, whether customers liked it or not. There have been some rumors that Steve Bannon will be producing his own brand of clothes, Under the Bannon Tree. However, rumors have it that exclusive rights to that label were picked up by TsUM, one of the most prestigious department stores in Moscow, as part of a deal negotiated by National Security Advisor General Michael Flynn, even before Mr. Trump was inaugurated. There are more liberal attitudes towards leaders using their positions of power to increase their wealth in Russia as there are in North Korea--something which flies in the face of the repressive policies limiting such aggrandizement in the States and which stop America from being great.