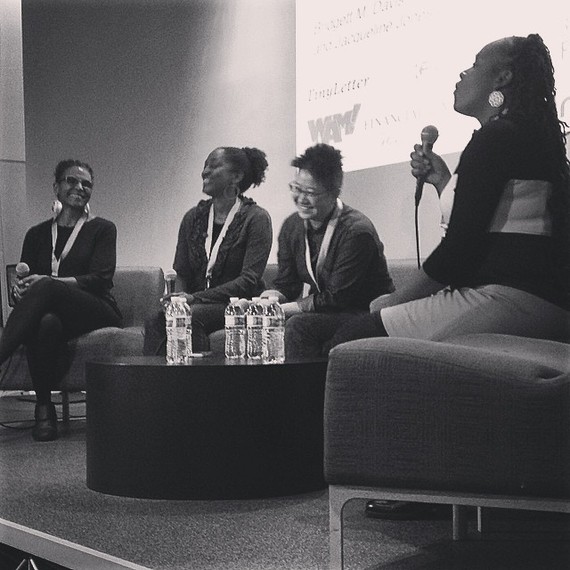 Ten years ago, you'd never have caught me dead at a conference dedicated to "women and gender non-comforming writers." I thought I'd had my fill of female community after a terrible stint at an all girls prep school in my small Southern town. There I'd felt the emphasis on female-ness ghettoizing, a matter of reducing me (at the peak of puberty) to my breasts and ovaries and the way the world reacted negatively to those bits and parts, no matter how I identified or what other labels I might subscribe to. Yet the first annual BinderCon in New York City was a breath a fresh air, a space where women were celebrated no matter how else they might describe themselves and what other qualities they might possess. The goal was simple, to help women share their voices in the media, and achieve a fair and equal place in the professions where they earn their bread.

The problem of female-only communities is a complex one. There is the continual challenge of making safe spaces for women safe spaces for all women, including trans and women of color, as current conversations about intersectionality reflect. Lesbians and bisexuals weren't acknowledged at my school, nor were trans women. I struggled with my sexuality, my first encounters of it primed with loaded lectures on abstinence and assigned readings of It Happened to Nancy. I was encouraged to take STEM classes, and told repeatedly that it was a splendid opportunity for girls to break into forbidden careers. Yet as a shy, creative writer I only felt guilt and shame for failing at what so many people pressured me to excel at. The danger of trying to create new definitions of what women can be is that it's all too easy to instead give us a new set of limitations, a new Barbie doll uniform instead of the freedom to simply be.

Single-sex education made me hate the woman I was becoming. I used to pride myself on the description that I was "not like other girls." I had few female friends and wanted to be one of the guys. My all-girls school trained my focus on women's vulnerability and systemic sexism without offering concrete solutions. I was informed of the challenges and dangers women face, without being given explicit tools to fight back and protect myself. I was taught to be modest and quiet and careful, but never to use my voice in the same way that the students were at the all-boys school across town. We read about strong women in almost every English class assignment, but were rarely instructed on how to create a world in which women don't have to be strong because they no longer face adversity. We were trained to be reactionary, rather than to create real change.

It many respects, it was feminism that drove me to drop out of school. It was the same set of principles and feelings that led me to purchase a last-minute, expensive plane ticket to BinderCon. It was a long and painful journey from one female-centric community to another, but when I arrived, I was able to recognize what it is that makes BinderCon so special. It was a well-executed, intentional community for women, one rising to the challenge of making such a community work for all women, rather than just a few kinds of ladies.

It helps, for one, that BinderCon was created by women, for women. Unlike my all-girls high school that was under the sway of a conservative, wealthy, white male headmaster, a partially-male, conservative, wealthy board, and numerous male, white, conservative, wealthy parents, BinderCon came out of many women's vision for an inclusive female community. Better yet, it was many women's vision for an inclusive female community that actively addressed the many ways women are shut out of the media industry. The goal of the conference was to explore how women can change the status quo and be equally seen and heard in publishing. That's a very different goal than one than the benevolently sexist female communities of yore, which sought to give women a space space without encouraging them to fight to make every aspect of their lives equally safe. It's also a goal that can't be mistaken for reverse sexism, as often happens when women try to create female-centric events and gatherings as a counterbalance to Old Boys Clubs.

Yet BinderCon, in its first year, revealed the holes in the Swiss cheese of feminism, however carefully cultured. As much as I individually felt validated, comforted, and encouraged by the speakers and topics presented, there were certain criticisms to be leveled. Many attendees took to Twitter to express how they were taken aback by Jill Abramson's weak comments on race and diversity in the newsroom. In this sense BinderCon's problems are the same as feminism's problems in general. When one woman's voice fails to fully support and encompass all women, it can be a turnoff and undermine the movement.

We've seen this time and time again not just at this one conference, but in numerous national conversations around feminism that center on high profile comments that are less than intersectional. Because feminism is such a diverse movement, and because women come to feminism from so many different backgrounds and views, because they define feminism so differently, and because our goals for feminism can be so wildly different, it is inherently difficult letting a few speak for many.

That said, those who were dismayed on Twitter seemed to differentiate between Abramson's views and those of the conference in general. Further more, if there was going to be a single voice that attendees and speakers alike almost universally rallied around, it was Bad Feminist author Roxanne Gay, who was mentioned at nearly every panel and in passing throughout the weekend. That says a lot about the BinderCon ethos that there is no right way to be a woman, nor a right way to be a feminist.

BinderCon was ultimately a successful debut of a new model of female community. It neither indulged in the pink washing of movements like Susan G Koman (although there were some swank pink tote bags) or the problematic foundation and overtones of my high school education. Instead it set a strong tone for inclusive, action-oriented feminism that empowers women to not only create change, but celebrate themselves for who they are. I can only hope that future events (including this spring's BinderCon on the West Coast) not only keep up that tone but enhance it. After all, what I learned in high school was how painful it is to be part of a female community that rejects the kind of woman you are.

Now that I've found a more supportive, inclusive, expansive environment in BinderCon there's a part of me that will miss these days of camaraderie in the trenches. I can't wait for equality and to see sexism become a thing of the past, but I hope we don't lose the sense of sisterhood and excitement we had this weekend. If anyone else felt the same kind of alienation and frustration I did in my teens and early twenty somethings, you know what a balm it is to find a female community that feels right. After all, to tweak Flannery O'Conner, a good bunch of girlfriends is hard to find, not to mention a good binder full of women writers.