My first HuffPost Book Club selection of 2010 is Janine Wedel's Shadow Elite: How the World's New Power Brokers Undermine Democracy, Government, and the Free Market. It's a gripping, disquieting book that exposes and explains why it's been so hard to bring about any real change in our country -- why Washington no longer seems capable of addressing the problems our nation faces. Fingers have been pointed at everything from gerrymandering to partisan polarization to the misuse of the filibuster. But, according to Wedel, the real problem is much deeper -- and more disturbing -- than any of these.

As she writes in Shadow Elite, a new "transnational" class of elites has taken over our country: "The mover and shaker who serves at one and the same time as business consultant, think-tanker, TV pundit, and government adviser glides in and around the organizations that enlist his services. It is not just his time that is divided. His loyalties, too, are often flexible."

Wedel dubs this new class of influencers "flexians," and the closed system they've created for themselves the "flex net." She attributes their power, among other factors, to the "embrace of 'truthiness,' which allows people to play with how they present themselves to the world, regardless of fact or track record." 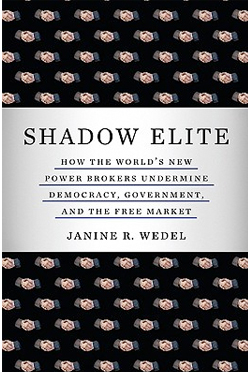 Wedel cites retired Gen. Barry McCaffrey as one example of this new international super-class -- a member of the shadow elite that serves in government posts, moves to the private sector, goes on TV, and collects a healthy paycheck from companies that benefit when the power broker's advice is taken. McCaffrey was one of the Pentagon-pundits-for-pay exposed by two Pulitzer-winning front-page stories in the New York Times last year. Yet even as I write this, he's on TV giving us his wisdom on how to fight terrorism. Because, as Wedel points out again and again, members of the shadow elite keep morphing into their next incarnation no matter how often their conflicts of interest and their undermining of the public interest are revealed.

Another key flexian, former Treasury Secretary Robert Rubin, is on full display right now in Newsweek's special "Issues 2010" edition, in which he pens a lengthy essay on "Getting the Economy Back on Track," failing, in a very flexian way, to explain or acknowledge -- let alone apologize for -- the key role he played in getting the economy off track in the first place.

Rubin's resume is the personification of the flex net in action, as he seamlessly moved between political positions (Director of the National Economic Council, Treasury Secretary), private positions (as a board member and senior counselor at Citigroup, he received over $126 million in cash and stock), advisory positions (including serving on the President's Advisory Committee for Trade Negotiations and the SEC's Market Oversight and Financial Services Advisory Committee), and stints on a World Bank task force on Growth and Development, work as an unofficial economic advisor to President Obama, and his current position as co-chairman of the Council on Foreign Relations.

You can read Rubin's 2,500+ word Newsweek piece here. But I was much more interested in the 28-word bio at the end of it: "Rubin is a former secretary of the Treasury (1995-99). He now serves as co-chairman of the Council on Foreign Relations and is a fellow of the Harvard Corporation." Given that the piece is about the economic meltdown, it's telling that the bio doesn't include his nearly ten years at Citibank -- during the very time that ended with the bank having to be saved by the American taxpayers.

But that's how the flex net works: you are able to wreak destruction, bank a tidy profit, then go along your merry way, pontificating about how "markets have an inherent and inevitable tendency -- probably rooted in human nature -- to go to excess, both on the upside and the downside." And how many people remember key details in Rubin's career like his vociferous opposition, during the Clinton years, to the regulation of derivatives -- a key factor in the meltdown? Or his lobbying the Treasury during the Bush years to prevent the downgrading of the credit rating of Enron -- a debtor of Citigroup?

Last month, Janine Wedel came to HuffPost's D.C. office to talk about her book. Our team was riveted as she painted a portrait of our political culture not from the perspective of a political scientist but from that of a social anthropologist. As a professor of public policy and social anthropology at George Mason, Wedel spent years studying what happened in Eastern Europe after the fall of communism, and sees a similar co-mingling of state power and private power at work here.

Take the health care fight. Though Wedel completed her book before the most recent twists and turns in the legislative process, reading Shadow Elite you get the feeling you are being given a peek at the how-to manual the insurance and drug companies -- and their water-carriers in Congress -- used to ensure that what may well have started out as a push for real reform ended up as an industry windfall.

The shadow elite clearly knew that the months and months of so-called debate over the issue was nothing more than a charade -- the ultimate outcome never in doubt. The bill was created in the shadows. The public process since then has essentially been like a Hollywood adaptation -- complete with the requisite third act happy ending (or, in the words of our elected officials, a "historic" ending).

"The new breed of players," writes Wedel, "who operate at the nexus of official and private power, cannot only co-opt public policy agendas, crafting policy with their own purposes in mind. They test the time-honored principles of both the canons of accountability of the modern state and the codes of competition of the free market. In so doing, they reorganize relations between bureaucracy and business to their advantage, and challenge the walls erected to separate them. As these walls erode, players are better able to use official power and resources without public oversight."

That's a spot-on description of what happened with health care -- as well as a spot-on description of the totally-lacking-in-transparency bailout of the financial system. Remember how the bailout was supposed to take care of not just Wall Street but Main Street? Well, the former ended up with record profits and bonuses while the latter is looking at double-digit unemployment -- and millions of foreclosures and bankruptcies -- for the rest of the year.

As for the "embrace of truthiness" Wedel writes about, witness this exchange from This Week between Jake Tapper and White House spokesman Robert Gibbs. Tapper asked Gibbs about Obama's broken promise to televise health care negotiations on C-SPAN and whether Obama will at least push for transparency for the final reconciliation process. Gibbs' response:

Well, Jake, first of all, let's take a step back and understand that this is a process legislatively that has played out over the course of nine months. There have been a countless number of public hearings. The Senate did a lot of their voting at 1:00 and 2:00 in the morning on C-SPAN. A lot of this debate -- I think what the president promised and pledged was so that you could see who was fighting for their constituents and who was fighting for drug and insurance companies...

Talk about being flexible -- Gibbs is a world-class rhetorical yogi. So all that talk during the campaign about transparency now just comes down to Congressional votes being shown on C-SPAN -- as they've always been?

The worst part is that Gibbs' posturing about being on the side of constituents rather than the drug and insurance industries sounds so normal. Gibbs knows all too well that he's supposed to shake his fist at the insurance companies, just as Larry Summers and Tim Geithner -- who both feature prominently in Shadow Elite -- know they're supposed to talk tough to the banks and vow to end "too-big-to-fail." But, as Wedel writes, they've rigged the system so they can "institutionalize their subversion of it."

And in the same way that our regulatory structure was outmoded and unable to deal with the complex new financial instruments devised by Wall Street, the rhetoric we use today to describe what's happening to our system is not up to the task. According to Wedel, terms like "lobbyist," "interest group," "corruption," and "conflict of interest" no longer suffice.

The new flexians are, as HuffPost's Arthur Delaney dubbed them, "influence launderers." That's why a flexian like Tom Daschle never needed to bother registering as a lobbyist. He could do the same things, selling off the public trust to the highest bidder, and then go around bragging about how he's never sullied himself with actual lobbying.

With our capitalist version of what Wedel describes as the "merging of state and private power that characterized both communism and postcommunism," we're getting to the point where the only difference between senior congressional staffers and the lobbyists and influence launderers whose ranks they'll soon join is the size of their paychecks. They just have to do a few years in Congress before joining their former bosses. It's a kind of grad school: put in a few semesters getting your Masters of Influence and you won't have to worry about paying off those school loans.

So how can we wrest control of our government from the Shadow Elite?

As Wedel says, the first step is to understand. "Merely exposing certain activities is not enough," she writes, "framing them is essential." We need to reframe how we look at and think about and respond to what is being done in our name and with our resources.

Reading -- and talking about -- Shadow Elite is a great first step in that reframing process. And don't miss Janine Wedel's blog post about her book, coming tomorrow. Let's get the conversation going.

Get your copy of Janine Wedel's Shadow Elite at Amazon.com