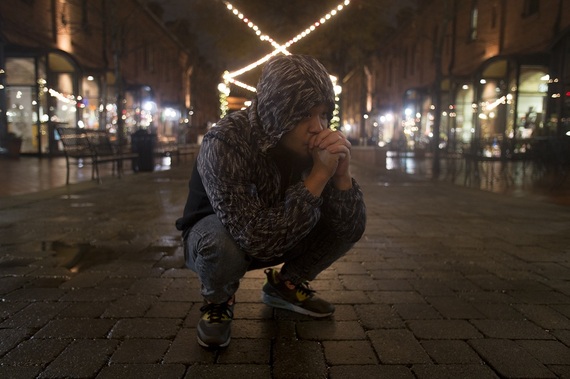 First of all, congratulations on the release of your self-titled debut EP. I've listened to it quite a few times now and it is definitely my favorite album of 2016 so far. Everything about it, from your lyrics to the booklet artwork and the title of the EP itself, seems extremely personal and passionate. What can you tell us about what went into the creation of this project?

Thank you so much! I think I'm slowly starting to really understand how much goes into the creation of a cohesive body of work. At the beginning of 2015, I knew I reached a place where I felt comfortable within my voice, and this would be the first project where I'm beginning to musically experiment with my poetics, so there was a lot of self-induced pressure when I began exploring what my "sound" would actually sound like. I was searching for all kinda beats through different mediums, and one day I somehow got in contact with Ben (TRILL) on Instagram and the joints he sent immediately pried some songs out of me.

I kept racking my brain on trying to create this super conceptual album that had no loose ends and was a classic record and blew people's minds and was never-before-heard and...yeah. I was still writing to different beats and thinking of ways to create an audience for myself, instead of just being myself and letting an audience form around that. At a certain point I realized that me and Ben had created an authentic glimpse of my life, and that's when I decided to complete this first phase of exploration.

Another thing I think listeners will pick up on right away is the coherence in the sound on this EP. Of course, this has a lot to do with the fact that you worked with the same producer on every track. Was this a conscious decision from the jump? Also, tell us about some of the musical influences that shaped the sound and vision of this project.

The coherence of the album was definitely not a conscious decision, it was actually an accident, hah. But when I first heard Ben's sound, I was blown away by his "cinematic trap" kinda feel. It really embodied my connection to the South with the 808's, but also felt like the space he created with the samples gave me the room to really be able to explore each emotion lyrically. And when I looked back, the songs we made mystically represented my life in a way that the others hadn't. All the instrumentals he chopped have always moved me and I definitely wanna keep exploring that sound.

You are considered by a lot of folks to be one of the best young spoken word artists in the country. In fact, you're one of the youngest poets to ever become a National Poetry Slam Champion, an Individual World Poetry Slam Finalist, and a Southern Fried Champion. However, it's rarer than people might think for someone to be successful as both a spoken word artist and an MC. What inspired you at this stage in your career to focus on music as well?

Man, it hurts but people often say that poets are just "rappers who didn't make it." Which is kinda funny, somewhat true, but mostly false. The two art forms (just like all art forms) are so subjective but the difference is that hip hop has been so vastly commercialized that there's a greater incentive to begin a rap career even if you're not actually passionate about creating art. The poetry world--and the poetry slam community specifically--is competitive, but usually remains centered around the stories themselves instead of the end result of becoming recognized.

I naturally just started writing bars in a hotel room at 2 am one morning and that's when I knew this was going to feed my spirit. I've been so fortunate to be able to make a living from performing poetry and that financial stability and access to time opened the door for me to be able to experiment in different creative directions. Who knows, maybe I'll start painting or producing or even pick up a harmonica next, haha! I'll just keep following the voice.

Toward the end of the track "Gang Bangin,'" you say "I grew up on Lil Jon and the Lotus Sutra." I think this line, probably more than any other on the EP, captures the essence of what you bring to the culture in terms of your own unique story. Tell us about that story and how it shines through in your EP.

With hip hop being such a competitive art form, there's nothing greater than being the God MC. And coming from a Buddhist family, there was always an inherent tension between reading teachings of undying compassion and listening to recordings of senseless egotism. But hip hop has always been compelling to me because it has beautifully and vocally captured the complexity of the Black American experience, and once I began studying poetry, I realized it was because poetry itself has the ability to expound on the complexity of all human conditions.

Growing up practicing Buddhism in the Bible Belt was such a deepening experience that forced me to begin thinking about spirituality and truth at a very young age. The next line that follows the one you quoted is "both rhyme and religion taught me the oneness of good and evil," and I think that captures the essence of how exploring the world of hip hop through a Buddhist perspective gave me an encompassing approach that allowed me to feel connected to each story simply through the understanding that the battle between good and evil is inherent in all people. I'd say all of my work is definitely rooted in Buddhist, humanistic philosophy.

The novelist Franz Kafka once wrote that "A book must be the axe for the frozen sea within us." What kind of impact do you hope this project will have on listeners?

Well, one thing I've always loved about music is that regardless of how much you relate to the content itself, it attaches a sound to your personal suffering. It gives you an external vibration that can somehow reach these places that you can't put a finger on. And through that relationship with this tangible trigger, it somehow makes it easier to get through the processing of each emotional phase of your life. I guess this relationship with art has moved me so deeply that the most sincere thing I could do was to put all my creative energy into hopefully being able to give that same feeling to someone else.

Speaking of reading, I think my next big goal this year is to publish a book of poetry about my travels, along with another hip hop project. I don't know, I just wanna keep making stuff.

(Full disclosure: I have known and been friends with George for almost 20 years. That being said, I stand by my endorsement of the George Yamazawa EP regardless of our friendship and invite you to listen for yourself at the link below and draw your own conclusions).