The fact that Mitch Albom's latest book, The First Phone Call From Heaven, has shot to the top of the New York Times bestseller list is a testament both to his excellence as a writer and to the yearning in the hearts of millions to understand what counts in life and the mysteries of what happens after our physical death.

I had the pleasure of hearing Mitch speak on his recent book tour, and was fascinated to hear him say that two themes that run through his latest book are 1) the power of the voice and its role in human connection as symbolized through the telephone and 2) miracles -- how sometimes, instead of being obsessed with one big spectacular miracle, we should pay attention to the many smaller miracles that are accumulating all around us. Without giving away the plot of the book, there is a beautiful subplot that runs parallel to the main fictional story: the history of Alexander Graham Bell's invention of the telephone, and how it was motivated by Bell's love for his wife who couldn't speak. 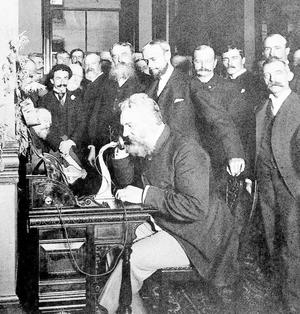 I was struck when reading the book by a fascinating connection between the early history of the Baha'i Faith to Alexander Graham Bell and to this book. Abdul Baha, a central figure of the Baha'i Faith, met with Alexander Graham Bell on April 24, 1912 at the Bell's home in Washington DC. From what is recorded of the conversation, the topics they discussed were directly related to the two themes that Mitch Albom described as central to this book!

At Alexander Graham Bell's home that night, part of the discussion centered around his wish to invent an instrument that would help the deaf to communicate. Out of deep love for his wife, he devoted himself to this goal day and night, and in the end invented the telephone, not fulfilling his original purpose but changing many lives nonetheless. To this Abdul Baha said:

Yes, most of the great inventions were made in a similar way. For instance, the search for alchemy has brought into being thousands of useful medicines, and the desire of finding a direct route to India from Europe became the cause of the discovery of America.


This theme of miracles of communication facilitating ever-greater human connections at our current stage of history is especially interesting for Baha'is. The Baha'i Faith began just a day before Samuel Morse's first telegraph message in May 1844, and in 1912, Abdul Baha is reported to have said that before long, we would see how anyone, anywhere in the world could speak to anyone, anywhere else in the world as if face to face. In 1936, decades before the Internet, Abdul Baha's grandson, Shoghi Effendi, wrote:

A mechanism of world inter-communication will be devised, embracing the whole planet, freed from national hindrances and restrictions, and functioning with marvellous swiftness and perfect regularity. 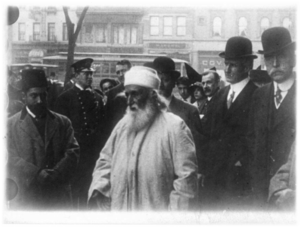 Abdul Baha in the United States, 1912

As to communication with those who have passed on, Abdul Baha was asked this question while in London, to which he replied:

In the next world, man will find himself freed from many of the disabilities under which he now suffers. Those who have passed on through death, have a sphere of their own. It is not removed from ours; their work, the work of the Kingdom, is ours; but it is sanctified from what we call 'time and place.' Time with us is measured by the sun. When there is no more sunrise, and no more sunset, that kind of time does not exist for man. Those who have ascended have different attributes from those who are still on earth, yet there is no real separation.

In prayer there is a mingling of station, a mingling of condition. Pray for them as they pray for you! When you do not know it, and are in a receptive attitude, they are able to make suggestions to you, if you are in difficulty. This sometimes happens in sleep. But there is no phenomenal interaction ... the spirit of those that have passed on are freed from sense-life, and do not use physical means. It is not possible to put these great matters into human words; the language of man is the language of children, and man's explanation often leads astray.

Whether or not you believe there can be connections with loved ones who have passed on, The First Phone Call from Heaven will give you a new appreciation of the miracle that many of us carry in our pockets everyday and take for granted -- the miracle of the telephone, which we can all use to communicate "with anyone, anywhere in the world" because of one man's immense love for his wife.