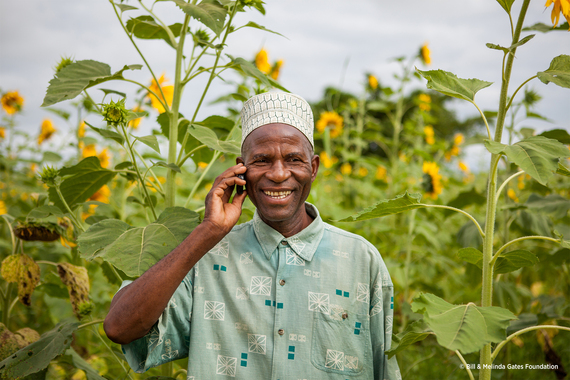 How can we include the world's most vulnerable people in the decisions that affect them? It's simple: We ask them. How? By combining the two most powerful communications tools in the developing world: radio and mobile phones.

The history of international development is rife with examples of good intentions gone wrong. Too often the intended beneficiaries of development projects are simply left out of the planning process. Thankfully, much of the field has moved from top-down approaches to more people-centred, participatory ones that actually engage citizens in the discussion. This is important because connecting with people to understand their needs, learn from them, and engage them as agents of their own development can lead to radically better outcomes in the long run.

Until recently, however, having conversations as part of the development process was really challenging -- and expensive. Intended recipients of foreign aid often live in hard-to-reach, far-flung rural areas. They often lack the tools to engage with and be heard by policy-makers and non-profit organizations alike. And they have been limited by their lack of literacy and access to communications technologies.

But things are different now. Combining radio and mobile phones is making conversations in development possible on a level like never before.

In rural Africa, where we work with our partners, radio is everywhere. Its popularity is explained by the fact that it's cheap, portable, shareable, and easy to understand. It's been the favoured medium of African small-scale farmers for decades. With radio, they are not limited by their literacy skills. And radio reaches them where they live, in languages they understand.

With the rise of mobile phones in Africa, radio is more powerful than ever before, revolutionizing communications possibilities in Africa within only a few short years. In 2002, only about ten per cent of African owned a mobile phone. Now most do. And many own more than one.

Stronger together, radio and mobile phones are a dynamic duo that can amplify the voices of those who are heard from the least and unlock conversations that will make development work more effective and efficient.

So, how can radio and mobile phones work together to share the opinions and ideas of real people with decision-makers and development practitioners? That was the question behind the Listening Post, a feedback mechanism developed at Farm Radio's ICT innovation lab in Arusha, Tanzania, to send unfiltered public opinion to government bodies and development organizations.

The Listening Post combines specialized radio broadcasts with Uliza, Farm Radio's tool for gathering and analyzing feedback and questions from audience members. Uliza is built on an interactive voice response (IVR) system developed by VOTO Mobile that enables listeners to vote on poll questions, leave messages, and request the delivery of specific information such as weather forecasts and the location of markets.

When you combine the ease of use of mobile phones with the ubiquity and popularity of radio, you have a winning combination that can truly reach scale to gather feedback from thousands of users in a short period of time.

We used the Listening Post methodology to help two of the most trusted radio stations in Tanzania (Radio Maria and Radio Free Africa) run a series of four special radio episodes. Each episode explored a priority issue for Canada's approach to international development and shared a question with listeners. To respond, listeners sent a free missed call to the station, prompting an automatic callback by our polling tool, Uliza, at no cost to them.

The response was overwhelming. Nearly 3,000 participants answered the questions posed over the radio and our mobile phone system recorded over 9,000 interactions with listeners. These included structured polls as well as open-ended voice recordings, providing important insight on income and food security, gender equality, climate change, support for young people, and more.

See the full poll results and messages from farmers here.

Just as radio and mobile phones are stronger together, so too are development practitioners and the people who are striving to improve their own lives. It is only by closing the gap between ordinary citizens and decision-makers that we can envision the thoughtful and inclusive development policies that we need to reach the most marginalized people. This cannot happen without the kinds of conversations in development that tools like the Listening Post make possible.