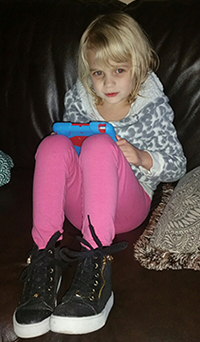 "The first time I realized my nonverbal child, Olivia, was trying to communicate with me I just lost it. It felt like every emotion I had ever experienced rushed through me all at once. I felt immense joy that I could now get a glimpse into her world that had been hidden away from me for so many years. But I also felt some level of guilt and regret that I hadn't noticed earlier. I'm sharing my story here to hopefully help one or two of you parents of not-so-verbal children with autism have an experience similar to mine.

In the beginning of my autism journey I was exhausted. I was frustrated, and like many of us, I was scrambling for answers. When I wasn't reading every autism book I could get my hands on, I used any free moment to catch up on housework, emails and the hundreds of other daily tasks clamoring for my attention.

Unfortunately, I wasn't spending much of my time being present with my child. When I wanted to occupy Oliva I would give her my iPad, her most prized possession. I knew it would keep her attention long enough for me to make some progress on whatever task I was wrestling with at the time. Her time on the iPad was mostly spent watching videos. Unbeknownst to me, this would be the key to us bonding and communicating.

One day when I finally felt like I could take a much needed breath, I sat down next to Olivia and watched one of the videos she had been playing that day like a broken record. It was about playing outside in the water. I don't know how or why it struck me, but my intuition said that maybe she was playing the song for a reason. Maybe she longed for what the song was about, playing outside in the water.

So I grabbed her up and brought her outside to sit by our pool. I saw her eyes brighten in a way they never had before, and I felt her relax back in a big way. She knew that I got her message. Finally, someone understood her. All this time she had been playing me songs to send me messages, but I was too much of a nervous wreck to notice.

After I realized what was happening with her songs, our interactions became more frequent and joyful. We delighted in this new found medium for communicating what we had been trying to say to each other for so long. Even though to the outside world it didn't look like a typical conversation, it felt more intense than any other interaction I've had with another person.

What amazed me was the fact that when I joined her in her favorite activity, it ended up giving me the answers I was looking for on how to reach her. Our encounters led to more smiles exchanged, improved eye contact, and eventually other forms of intuitive and now verbal communication. To be honest, I felt embarrassed that it took me so long to figure it out. If I hadn't taken the time to slow down, calm and catch my breath, I may have never received her messages."

The First Step to Having a Communication Breakthrough

The above story is from my former client and good friend, Danelle Shouse. I had the honor of supporting Danelle and Olivia during their journey to discovering how to communicate. I believe one of the reasons Danelle was able to figure out how to bond so deeply with her child was because she learned how to communicate with Olivia on Olivia's terms first. Before making this commitment Danelle was swept up in the busyness of life and felt lost in how to reach her child.

The first and most important step we worked on to help Olivia was to help her mother calm her own overactive mind and nervous system. When a parent learns to calm themselves it does wonders for both the parent and the autistic child. The reason calming so profoundly affects the child is because autistic children are like perfect tuning forks for the moods and emotions of their parents. The more stressed out the parent becomes, the more anxious the child will behave. In turn, the anxious child will then act out and make the parent even more stressed. And this mirroring cycle continues until the parent decides to calm. 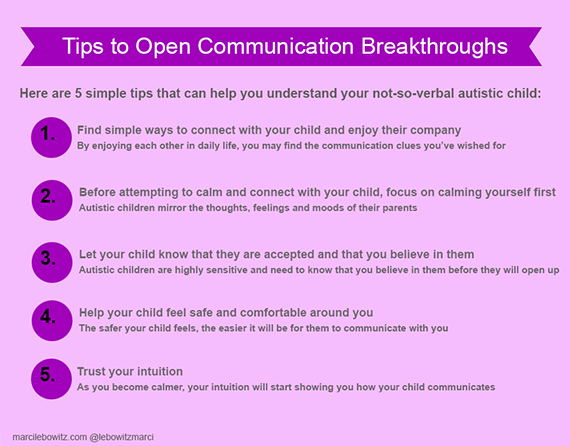 Once you stop trying to anticipate your child's next meltdown, and instead turn your attention to calming yourself, your child will notice the shift in you. Your calmness will feel like a warm blanket to them. The safer they feel with you, the easier it will be for them to try and communicate with you in whatever way is possible for them.

When you approach your child calmly, this will allow you to decipher the communication clues your child is sending you with clarity. Your high-strung nerves can melt away into compassion, bringing a sense of peace to both you and your child. For a deeper look into the calming and communication methods I employed with Danelle and many others, you can get my free eBook, Autism Simplified for Parents, here. It's a quick and easy read with tons of useful, actionable information that will make your parenting life easier.