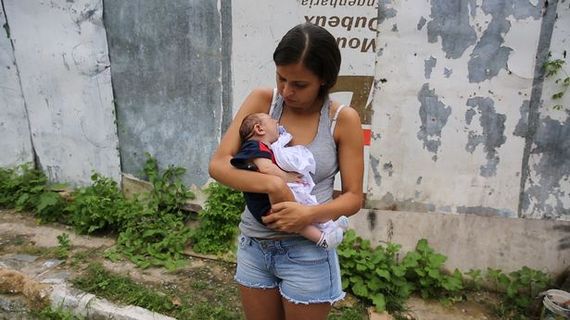 Zika is affecting people in the US, and it is just the beginning of a global crisis that is here to stay. It is more then just a virus, Zika is affecting female dignity and freedom of choice, putting at risk women's health, future family life and, in many cases, perpetuating the poverty cycle for families in developing countries.

Current pro-life policies that are influenced by religious views in many South American countries do not allow abortion except for the cases of rape or a pregnancy which can cause health issues to a woman. Many of these countries today are waking up to realization of an underestimated danger of the Zika virus. A major wake up call is the fact that World Health Organization recently announced a global emergency situation in relation to Zika. Brazil's health ministry alone reported 270 cases of microcephaly, which is a birth defect in newborn children caused by Zika virus, since September.

Things are getting worse rapidly as a first baby with a Zika virus-linked birth defect was born in New York City area Tuesday. The baby girl was born in New Jersey with a partially developed brain due to the virus, according to FoxNews.com. The infant's 31-year-old mom contracted the mosquito-transmitted virus while in Honduras, doctors at Hackensack University Medical Center in New Jersey reported. In these circumstances, United Nations' representatives suggested an adoption of abortion and contraception policies in the countries where the virus is concentrated. The High Commissioner for Human Rights of UN, Zeid Ra'ad Al Hussein, stated: "Laws and policies that restrict her access to these services must be urgently reviewed." However, Al Hussein also explained that the call of some governments for women to postpone their pregnancy might not be effective simply due to the fact that "many women and girls simply cannot exercise control over whether, when or under what circumstances they become pregnant." This makes abortion a corner stone question that is becoming increasingly controversial, building pressure on the government officials of South American countries to pay more attention to the spread of Zika.

Another concern that scientists have today is that the disease now is proved to be transmitted not only through mosquito bites but also through sexual contact, saliva and urine, which was established by the findings by Oswaldo Cruz's foundation in Brazil. Today in Brazil, one the countries where Zika virus is highly concentrated, abortions are allowed only in cases of rape, anencephaly (fetus is missing a part of a brain or skull) and when a pregnancy can cause danger to life of a woman. Recent findings make the situation even more complicated. If a woman gets infected early during pregnancy, the tests do not show Zika birth defects in fetus until after 20 weeks. After such a period the abortion is considered a late abortion, and therefore has a higher risk to cause damage to woman's health with higher costs. Today a large number of countries forbid abortion after a certain number of weeks.

The pro-life basic premise is that after the brain of a fetus is formed, it should be treated as a patient, and therefore simply "erasing" the fetus cannot be viewed as the right solution. Even though the Zika issue is predicted to cause significant economic and social consequences, especially for less protected populations of developing nations in Central and South America, religious leaders do not accept the concept of abortion. Pope Francis in his recent interview with CNN on this topic fiercely opposed the idea, stating: "It is to kill someone in order to save another. This is what the Mafia does." "On the other hand, avoiding pregnancy is not an absolute evil," the Pope continued. Therefore, even the head of Catholic Church doesn't view the prevention of pregnancy as an act against the Christian religion.

This winter, the Centers for Disease Control and Prevention warned pregnant women to avoid traveling to areas where Zika is spreading, such as South America and Central America. However, the rapidness of the outbreak leaves many unaware and unprepared for the severity of the consequences of this global threat. The situation causes a lot of distortion for women in their personal and social life, shaking some of the most essential priorities, values and beliefs.