The following remarks were delivered by Valarie Kaur at the Pentagon's first-ever event to commemorate the Sikh faith on April 25, 2014. Hosted by the Pentagon Chaplain, the program was organized by Major Kalsi, Captain Rattan, Corporal Lamba, and the Sikh Coalition, an organization leading the campaign for turbaned Sikhs and other people of faith to be allowed to serve in the U.S. military.

Thank you to the Pentagon Chaplain and Chaplain corps for gathering us here to celebrate Vaisakhi, the founding of the Sikh community as the Khalsa, a spiritual sister and brotherhood.

This is the first-ever Sikh event at the Pentagon in the history of the United States. Today is a milestone for the Sikh community, who has made America home for more than a century, and also for our nation, a nation devoted to a vision of equality where our institutions reflect the resplendent diversity of the American people.

Today we have heard the sacred music, poetry, and stories of the Sikh faith, concluding with decorated American hero Major Kamaljit Singh Kalsi's recitation of Ardas, the foundational Sikh prayer recited in all of our worship. Ardas resounds at every wedding and holiday, upon the naming of a child and the death of a loved one, and on every Sunday morning at gurdwaras (Sikh houses of worship) across the nation and around the world.

Ardas is a prayer and petition to God, but it is also a story of who we are as a people.

The prayer begins with the words Ik Onkar. One Reality Is. God is One. All paths lead to One.

This vision of Oneness was the divine revelation of a humble herdsman named Nanak born in the year 1469 in Punjab. It was a time of turmoil: Hindus and Muslims in conflict, women oppressed, and the poor outcaste. Then, the story goes, Nanak disappeared by the river for three days. He was thought a dead man, a drowned man, but on the third day, he emerged with a vision of unity: Ik Onkar.

Guru Nanak passed his light to nine successive teachers who led the Sikh community through the centuries, and in Ardas, we invoke each of these gurus by name. The tenth teacher Guru Gobind Singh declared that our final and everlasting teacher would be the Guru Granth Sahib, a compilation of our sacred poetry, and so we also invoke the wisdom contained in its pages. Throughout the prayer, we cry together in one voice: "Waheguru!" Wahe - an exultation of wonder. Guru - the Enlightener. We express our wonderment of God who enlightens us and shows us the Truth of Oneness.

Truth is higher than everything, Guru Nanak taught, but higher than truth is the living out of truth. After lifted up in ecstatic worship, we must not remain on the mountaintop; we are called to return to the earth to serve humanity in seva, spiritually grounded service. When we see injustice, we are never to hide. We are to stand for equality, fight for dignity, and serve others as ourselves - even when it becomes dangerous, even in the face of death.

"If you desire to play the game of love with Me," Guru Nanak calls to us, "then step forward with your head on your palm."

In Ardas, we can hear the echoes of a people who have lived and died walking that path of revolutionary love, starting with early battles for survival against invading Mughal armies. We invoke the Panj Pyare, the five Beloved Ones who were willing to give their lives for God when the tenth teacher called for sacrifice on Vaisakhi Day in 1699. We invoke the Char Sahibzade, his four martyred sons, the elder two fighting on a blood-soaked battlefield, the younger two bricked alive for refusing to renounce their faith.

We invoke the Chali Mukte, forty soldiers who abandoned their post during the siege of Anandpur but were led back by the woman warrior Mai Bhago. Donning a turban and mounting a horse with sword in her hand, she has become the Sikh model of a saint-soldier - one who loves God ever-devoted to fighting for justice on earth, who becomes the one she is waiting for.

In fact, we invoke all those who have lived with God's Name in their hearts, shared what they have with others, forgiven freely, and fought injustice. We invoke all "those Lions and Lionesses who have given their heads for their religion: who were cut limb by limb, scalped, crushed on the wheel and sawn in pieces, who sacrificed in service of our gurdwaras, who did not relinquish their faith and served with every hair and breath."

As we recite Ardas, we remember even the sacrifices of the last century. We remember the soldiers who marched to fight Hitler's armies, soldiers like my grandfather who bravely served wearing his turban, just as seven generations of fathers before him, saving a portion of his water canteen in the deserts of Egypt and Libya to wash his long hair.

We remember those who fought for India's independence and died in the massacres of the 1947 Partition, which carved Pakistan out of India and separated Sikhs from holy sites where we still pray to return. And we remember the men, women, and children murdered in 1984, thirty years ago this year, when the blood of three thousand Sikhs flowed in the streets of India's capitol in pogroms. In these moments of terror, Sikhs were identified by their turbans but would rather face death than give up who they were.

We are a people that have lived and suffered and struggled and still lift our heads high, Ardas reminds us.

And so we pray. We pray for the consciousness of the divine to enter all of our people, and for this remembrance to bring us joy. We pray for the sword and the serving bowl to triumph, so that the people will always overcome darkness. We pray for our religion to last through the ages with the gifts of discipline and discernment, truth and faith, and above all, the gift of God's presence in our hearts.

Finally, we pray for humanity.

"In the Name of God, we find everlasting optimism. Within Your Will, may there be grace for all of humanity."

The prayer of Ardas is the song of our people, our living guide and moral compass, echoing around the globe and on American soil. Like a river flowing through the centuries, Ardas pours the spirit of our people into our being and breathe, so that we are ever-nourished and ever-sustained. As a living document, it leaves open space at the end for us to offer our particular prayers as a congregation and silently in our own hearts.

Today, we hear Ardas on a day of celebration but we also hear this prayer in our darkest hours.

Just a year and a half ago, many of us in this room stood in the gurdwara in Oak Creek, Wisconsin, a house of worship that a few days before had been the site of a mass shooting - the largest act of violence on a faith community in America since the 1963 church bombing in Birmingham that took four little girls. In the days after that shooting, I watched the community tear out the blood-soaked carpets, pick up the shattered glass, and paint over the bullet holes in the walls, all to the sound of prayer.

Ardas gives us moral courage to endure in hardship, whether in the face of hate on city streets or blood in the prayer hall, and respond with love and compassion. But Ardas also reminds us that we are meant to face these struggles as sant-sipahi, saint-soldiers.

Once, the story goes, our tenth teacher Guru Gobind Singh was asked by a Mughal emperor to show him a miracle. The guru presented his sword or kirpan, one of our articles of faith. "This sword is my miracle," he said. "But there is a difference between my sword and yours. Behind your sword lurks anger. Behind my kirpan, only compassion. Yours only doles out death. Mine rejuvenates life. Yours deprives people of their dignity, while mine saves their honor."

The sword is a central symbol in the Sikh faith. The sword is made holy only when the soul has cultivated moral courage to wield it. Today, a new generation of Sikhs is learning to wield many kinds of swords - the pen, the film camera, the microphone, the doctor's scalpel, the lawsuit. Many in this room - Sapreet Kaur, Amardeep Singh, Rajdeep Singh, Gurjot Kaur, Satjeet Kaur, Amandeep Singh, Major Kamaljit Singh Kalsi, Lt. Colonel Ravi Chaudhary to name a few - are using their swords to fight for an America where all people may live, work, worship, and serve their country as equals.

So today, as we commemorate Vaisakhi at the Pentagon, let us also celebrate that we are still writing our story. Let our uniform of faith - this long hair, these proud turbans, this silver karra - show that we fight for the equality, freedom, and selfless service at the heart of the American ethic. And let us go forth in the spirit of Chardi Kala, the sense of boundless optimism that our children and our children's children will walk even these halls of power with the wisdom and strength of our faith, helping make this world a more just and loving place for sarbat da bhala -- for all of humanity.

To read the full text of the prayer of Ardas, click here for a translation by the Surat Initiative: http://www.thesuratinitiative.com/app/download/757293780/Ardas+Translation.pdf

PHOTO GALLERY
First Sikh Prayer At The Pentagon
Download
Calling all HuffPost superfans!
Sign up for membership to become a founding member and help shape HuffPost's next chapter
Join HuffPost 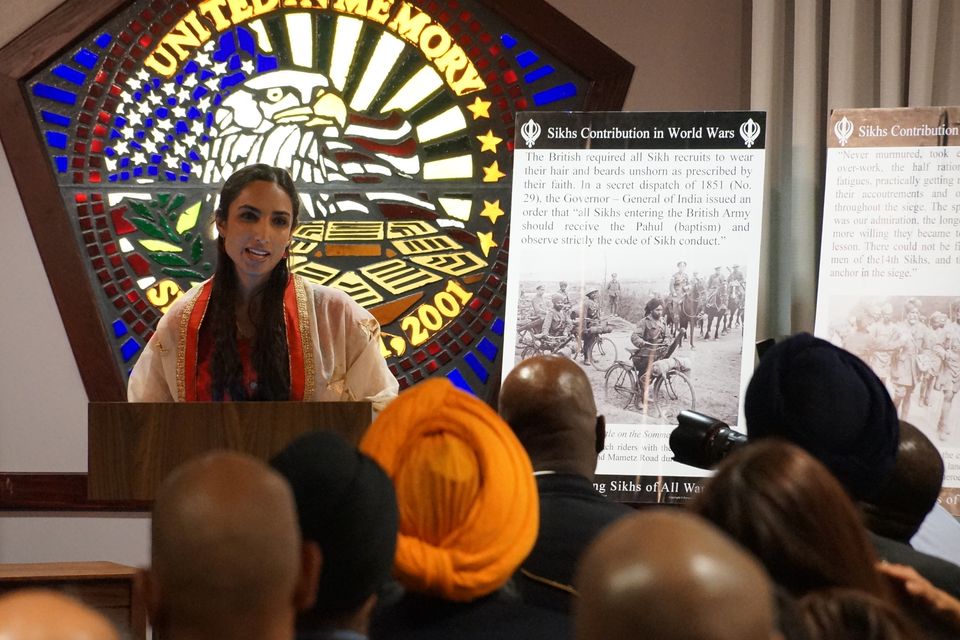