Rachel Maddow gets it. Economists and Republicans don't.

I watched Prof. Jeffrey Sachs on Rachel Maddow's show the other day. She asked whether the fiscal stimulus would work. "No" he said emphatically, it would not. "No one has the tools....to fix this......the fiscal hole will cripple us for the long-term."

She tentatively mentioned 'the multiplier.' He brushed this aside with a counsel of despair. "We might have a few more jobs in the short-term but a massive deficit in the long-term..."

Scant consolation for 13 million unemployed and underemployed Americans. Their lives could be transformed by this fiscal stimulus.

And anyway, as Keynes once noted, in the long term we're all dead.

Sachs's analysis is overwhelmingly shared by mainstream economists. And by Republicans. These have been whipping voters into a frenzy with talk of 'generational theft.' Future generations, they argue, will be paying for this fiscal stimulus for decades to come. That is simply not true, as I will show below.

Meantime, these points are truly rich coming from the Republicans. Readers no doubt know that during the Bush-Cheney years the US national debt doubled from $5,700bn in 2001 to $10,700bn today. Others may recollect that Mr. Cheney said in 2001: "Reagan proved that deficits don't matter."

So let's not hear any more from Republicans about deficits mattering or about 'generational theft.'

But to get back to history. The fiscal stimulus of the 1930's was positive -- both in the US and the UK. It dramatically lowered unemployment after 1933. 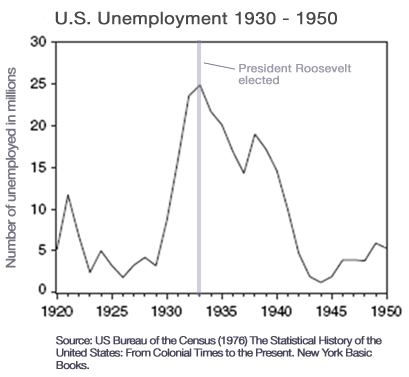 At times of high unemployment tax cuts may be saved and not spent into the economy. But when the government invests the bulk of $789 billion in real, productive economic activity - it always gets its money back - plus some.

It works like this. Government invests in labor-intensive programs e.g. $40 billion in energy efficiency and renewable energy programs, including $2.9 billion to weatherize modest-income homes. $27 billion for highway and bridge construction and repair and $11.5 billion for mass transit and rail projects; $4.6 billion for the Army Corps of Engineers; $5 billion for public housing improvements; $6.4 billion for clean and drinking water projects.

The energy efficiency/transportation/public housing programs hire American workers - some highly skilled, some not so skilled. These programs also purchase materials - from factories. Some foreign, but mostly American.

Next, something called 'the multiplier' kicks in. It's the ABC of economic science and works like this.

The workers get pay checks. They use the income to pay taxes - direct to the US government. So immediately the government can use these tax revenues to fix the budget. Then workers purchase goods and services - boosting the economy. Companies hire more workers to deal with demand for materials from stimulus-sponsored programs. More employed workers equals more taxpayers.

Because government spending is financed by bank money or credit, income increases. Eventually savings are generated to match the original stimulus expenditure - so there is no 'crowding out' by government. But savings too can find a way back to the US Treasury, because savers could end up investing in US Treasury bonds.

If workers or factories spend money on goods made in China - then some will leak out to China. But experience shows that investment in public works tends to be local investment. By weatherizing the homes of the poor, strengthening flood defenses, growing forests to act as pollution 'sinks' and subsidizing organic farming - investment stays at home.

But investing in this kind of economic activity is not the only revenue source for the US government.

A massive improvement to the budget will be in savings made in unemployment payments.

If the numbers of unemployed people were cut, and if Americans had enough income not to rely on food stamps - Congress would make massive savings to the budget. If we add those savings to the tax revenue generated thanks to the 'multiplier effect' - the outlook is positively rosy for a surplus on the budget as the economy recovers.

So lets not have any more talk of the 'crippling effects' of the American Recovery and Reinvestment Act of 2009.

If there is a complaint it's the one the non-economist Rachel Maddow made to Prof. Sachs. The fiscal stimulus is just not big enough. $789 billion will not be enough to fill the $2 trillion collapse in output since the crisis started.

So, it's more strength to your elbow President Obama. And Congress, get ready for phase two of the fiscal stimulus.