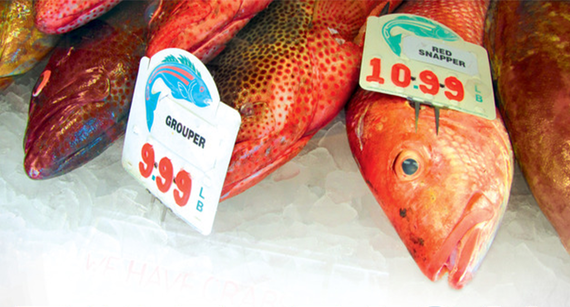 
THIS BOOK IS THE PRODUCT of a lost bet. That's the truth. In winter 2011, I had just written a story for a regional magazine about salmon fishing. And I was in a bar in Portland, Oregon, a wood-paneled place downtown called Cassidy's, loudly proclaiming that I was never going to do it again. Fish stories are boring, I said. Nobody reads them. There's nothing in them but a bunch of fishermen haggling over who gets to catch what.

I was with a small group of writers, most of whom agreed by glazing over. See what I mean? I thought. But there was one exception. A colleague had just taken a job with the nonprofit group Ecotrust and bet me on the spot that he could get me to write another fish story. Then he started telling me that the United States was privatizing its oceans through a policy called "catch shares." And that, while the work was dovetailing with a lot of foodie-centric and eco-conscious buzzwords, it was also creating class warfare on the seas, upending fishing families and unmooring fishing towns all over the nation. His was one of a handful of groups brewing antidotes to the fallout. The more he talked, the more I knew I'd lose the bet.

I was doing a lot of food and sustainability writing at the time, so the idea of goofy policy hiding behind eco-friendly jargon wasn't exactly new. To a journalist, greenwashing was the consumer plague of the millennium, amping up while organic food shifted from back-to-the-land hippies to the mainstream. By then, organics were a $25 billion industry in the United States, one in which fair-trade and environmentally conscious brands were garnering a premium from people dining on a do-no-harm ethos. Consumers who didn't want their eggs laid by caged chickens or their beef culled from penned cows were easy marks. I was already covering an enormous number of bunk-but-presumably-green-leaning food and product schemes. And given that the seafood counter was the place inside the grocery store where people looked the most lost, it seemed like a reasonable venue for a hoodwinking.

I was lucky the wager was only beer. A few months later I was on a plane to Alaska with loose orders from an editor to go sniff around. In between, I'd managed to get a handle on what catch shares were. The quick way to describe them is to say they're like cap-and-trade for fish; they deploy caps on the amount of fish that can be caught, then dole out the rights to fish them among qualifying entities. Those who qualify can be fishermen, boats, corporations—the design varies. It takes some history in the industry to get a piece. But once those rights are awarded by the government, whoever holds that slice of the pie holds exclusive access to a corresponding percentage of fish. Those rights are privately controlled after that. By law, the government can take them back at any time. But it hasn't. Every catch share in America has remained steadily in private hands since 1992. Now the rights to catch fish are private market assets that trade hotter in places like Alaska than brick-and-mortar real estate.

Promoters of catch shares are always quick to say that they're not privatizing the fish in the ocean, just the rights to catch them. It's a small distinction that translates, in practice, to the same thing. But the delicate public relations dance that attends that particular point has been whirling for the better part of a decade in America. For good reason, I've surmised. There is a strange marriage at the heart of this policy: one between the environmental lobby and privatization interests. And the effort, though well intentioned by many within organizations like the Environmental Defense Fund, has been substantially funded by conservatives and property-rights promoters, chiefly the founders of Walmart, facts that would give anybody with enviro cred pause if they were better known.

Before I went to Alaska, I spent two days in Oregon's Rogue Valley with a man named John Enge, a fisheries expert who ran a seafood-politics blog called Alaska Cafe. He was a saint of a person who is no longer with us. He sat me at his kitchen table and patiently brain-dumped at me until I understood three things: First, the private property rights attending catch shares had locked many fishermen and even whole communities out of the oceans. Second, catch shares had created powerful landlords on water. And third, as those landlords grew more powerful, catch shares were converting fishermen from proud family-business sorts into sharecroppers who were leasing their access to the sea from wealthy and increasingly corporate power brokers.

That was in 2012. What I'd envisioned was a quick jaunt to Alaska and a handful of stories. Instead, my trip turned into a four-year reporting odyssey that ended, back in Alaska, in the bunks of a fishing boat with a couple of twenty-something dudes. In between, I learned that I do indeed get seasick. And that a careful regimen of non-drowsy Dramamine, vanilla yogurt, and green-yellow Gatorade keeps it to a no-fuss affair. I also traveled to every catch share in America to walk the docks and talk to fishermen about how catch shares had changed their world. Some were kind enough to take me fishing and show me how that world worked. For context, I spent countless days in the fluorescent-lit meetings of US fishery management councils, the regulatory bodies that control commercial fishing in America. And I talked to chefs and fishermen, seafood buyers and suppliers, conservation groups, lobbyists, and political sorts, many of whom believed very deeply in catch shares. I learned there is a decent business case for privatizing the oceans. And that, while it can conflict with the social-equity ideas that many eco-conscious eaters go in for, it may be one that consumers find quite valid.

After years of staring at it, I've come to think of this as a David-and-Goliath kind of tale. It's about the fight between seafarers—those who held out against privatization—and powerful conservationists who were willing to trade privatization for both environmental gain and the most sustainable, traceable seafood in the world. It is a story full of grizzled, off-beat characters; action and adventure on the vast oceans off America's shores; good food; and big, big money. It caused me to see fishermen as just a particularly colorful brand of organic farmer. And catch-share holdouts as the only resisters to the denationalization of a natural resource most Americans believe they still own.

But Americans don't own the fish in their oceans anymore, not really.

This book is the straight-ahead telling of why that is true and how we got here. It is framed within the tale of a single seafood brand—Gulf Wild—as its creators try to trace each individual fish from the sea to the dinner plate. Interwoven within their adventure are the fates of those left behind: small-boat fishermen, crews, and whole communities.

This story matters. Wild fish, unlike beef and chicken, will never have an easy path to the dinner plate. And managing that journey is one of the most complex tasks any policymaker can undertake. It is also phenomenally difficult for the marketplace to finagle. And it's something conservationists have rightly tried to clean up. That's why consumers ought to know, when they pay a premium for sustainable wild seafood, what it is they are really buying. 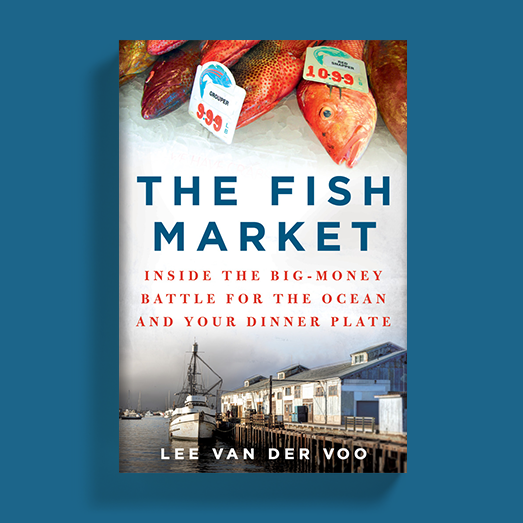 LEE VAN DER VOO is an award-winning journalist who writes about sustainability, food, policy, and social justice. Her research has been funded by the Fund for Investigative Journalism as well as the Alicia Patterson Foundation Fellowship. On staff at InvestigateWest, the nonprofit journalism studio for the Pacific Northwest, her work has been featured in The New York Times, Reuters, USA Today, The Chicago Tribune, CNN, Slate, and High Country News. She lives in Portland, Oregon.