Over the past two weeks, two powerful stories have dominated headlines: one is the refugee crisis, which I reflected on in my previous blog entry, and the other is the diesel deception scandal that has brought Volkswagen to the brink of collapse. These stories represent powerful yet very different social fields - by which I mean the structure of the relationship among individuals, groups, organizations and systems that gives rise to collective behaviors - which are co-shaping our global condition today. Those social fields are:

Much has been said about the moral dimension of the VW diesel deception. The company betrayed its customers, the public, and the planet by building "defeat devices" into 11 million of its cars (devices designed to switch off emission controls whenever the car is in normal use).

But there's a question that has not been answered yet: Why? How can a company that relies so completely on reputation and brand perception behave with such unbelievable stupidity and irresponsibility? Here is how the German newsmagazine Der Spiegel covered the story this week under the header "the suicide." 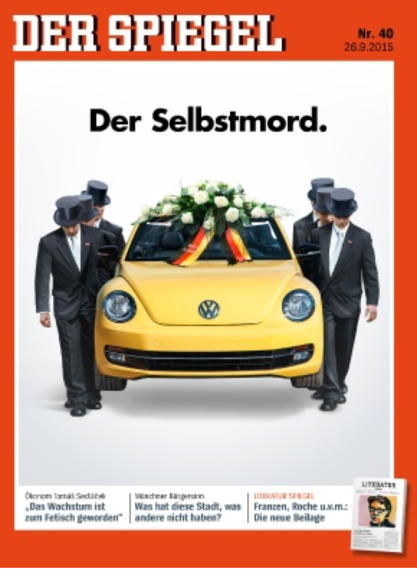 Is the company essentially killing itself? How could VW have possibly believed that such a deception would go undiscovered? All it took was a small experiment--with two cars and two measuring devices, and a few hundred miles of driving--initiated by the Berlin office of ICCT, a respected international NGO.

The answer to these questions, to the extent that we know anything today, seems to boil down to seven words: The fish rots from the head down. It's a saying in Germany and other places that means: the problem starts at the top.

The VW disaster is a leadership failure of epic proportion. It's connected to a leadership style and culture that, until now, was the source of incredible pride and success. Until a few days ago, the rise of Volkswagen from a sleepy German carmaker to a global powerhouse with 600,000 employees, 12 different auto brands, and more than 100 factories and plants in 31 countries, was a company saga admired around the world.

Yet, the same cultural genes that gave rise to all of VW's successes have, as the environment changed but the culture of the company didn't, suddenly turned into the seeds of its potential self-destruction. The firm was and is dominated by old white males that seem to be obsessed with becoming the world's biggest carmaker. Its top-down and control-based leadership culture, once a source of success, now prevented leaders from reading and recognizing information that, in a culture of fear and control, no one ever wants to communicate upwards - thereby preventing the company from learning as a system.

Lets look at the phenomenology of this collective learning disability in more detail. Here are five core features that define this "cycle of absencing" (self-destruction):

Denial: VW failed to heed the early warning signals that came its way. These included a letter from its supplier Bosch in 2007 (after VW decided to opt out of BlueTec, an NOx reducing technology co-developed by Bosch and Mercedes), a warning from its corporate revision in 2011, and the sharing from test results by ICCT in 2014 and the EPA in 2015 when the symptoms of the scandal started surfacing. VW dismissed, ignored, or, when confronted with the full evidence of the testing results, chose to not address these warnings with an appropriate (open) mind.

De-sensing: The leadership culture of VW probably amplified the problem by disconnecting itself from the values and trajectory of society, by entrenching in what another executive in the auto industry once called a "bullshit-castle"--that is, a world that is cut off from emerging societal realities such as the environmental movement. Germany, probably more than any other major industrial country, has been strongly shaped by the green movement. That VW, a German company, thought it was an option to install defeat devices that lie to the consumer and to the public about its actual emission demonstrates a breathtaking level of cynicism and disconnection from the ecological and societal realities of our time. Hubris/Absencing: No engineer wakes up in the morning and thinks: OK, today I want to build devices that deceive our customers and destroy our planet. Yet it happened. Why? Because of hubris at the top. VW's relentless pursuit of its goal to be bigger than anyone else produced huge internal pressure to increase volume and reduce costs. "Clean diesel" was a big part of realizing this strategy. Add to that a top-down culture that didn't tolerate anyone who said, "We can't do that." That pressure set a context that made VW decline the use of BlueTec (presumably too costly) and turn to an internal solution instead. Hubris essentially means that you get stuck in your own bubble, disconnecting yourself from what happens around you and from your inner sources of purpose and self (absencing). As a consequence, ethical integrity is fading...

Deception: Deception and manipulation show up in many forms. Volkswagen deceived its customers, the public and of course governmental agencies like the EPA. But it also deceived itself. Even though the information about the diesel deception scandal continued to surface and was communicated to the company by the ICCP (in 2014) and the EPA (in 2015)--the company continued to sail on its collision path, keeping most of its own executives and employees in the dark. And finally, as we are learning, there was an unholy alliance between the car industry and the German government that resulted in weakening the EU's emission standards, prolonging the company's ability to deceive itself and everyone else.

Destruction: Add up all the above, and what do you get? Destruction. Destruction in this case means (currently) 35% of shareholder value and tens of billions of dollars in fines (that yet are to be determined), but more important, destruction of trust, of relationships, of the environment. Given all the criminal investigations and class-action suits in the making, it may even eventually mean the self-destruction of the company as a whole--or a government bailout, in which case taxpayers would pay for the company's hubris.

Wait--where have we seen this pattern before? Ego-driven leadership is not limited to Volkswagen. We saw the same pattern on Wall Street during the financial crisis. And we still see it there today. The same unholy alliance still exists between the industry and its "regulators," in some ways even more starkly today (Wall Street funds both parties, and in return gets to staff for example the economic team of President Obama in 2008).

It's an interesting phenomenon that the size of a system seems to be inversely related to its enacted intelligence. The bigger the system, the less collective intelligence we tend to recognize. Across all major global systems today we collectively create results that no one wants (environmental destruction, social disintegration, armed conflict, etc.).

Why is this the case? One of the main drivers, I believe, is a disconnect between the globally interdependent eco-system reality of our world economy on the one hand and the highly fragmented ego-system mindset that we use to operate that economy on the other hand. Fixing that disconnect between eco-system reality and ego-system mindsets is, in my view, the number one leadership challenge today.

The cycle of presencing

So how do we move the mindset in an organization from ego to eco? That brings me back to the wonderful human response of people in some countries--Germany, Sweden, France and some others across Europe--to the refugee crisis (see my last blog entry). The characteristics of their response demonstrate the very opposite of the absencing cycle described above. That is:

--Seeing the humanitarian crisis and the individual human beings who are in need of help right now. --Sensing what their needs are. As a consequence, citizens start to "sense their own country from the edges," that is, through the eyes of the refugees. --Connecting to the deeper sources of our humanity, of our being. --Crystallizing what the future calls us to do, how we can contribute. --Co-creating through many helping relationships that prototype the future through hands-on local experiments to learn by doing. 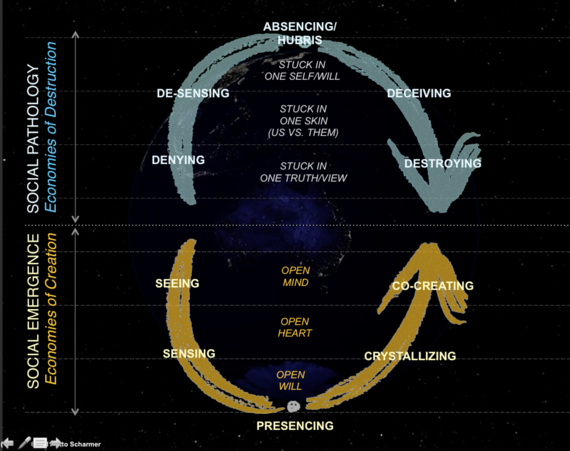 The Cycle of Presencing and the Cycle of Absencing (Source: Scharmer, Theory U)

Both of these cycles exist today: the cycle of absencing and self-destruction, and the cycle of presencing--of co-sensing and co-shaping the future as it emerges.

But what accounts for whether a system activates the generative field of presencing or the destructive field absencing? What are the inner and outer conditions for a system to shift from closing down and absencing to opening up and presencing?

We don't know for sure. But we do know that, in order to activate the generative field of presencing, we have to strengthen our innate capacity to listen with our mind and heart wide open, and to tune in to what emerges from the edges of our systems.

MITx U.Lab: A Global Movement to Co-shape the Future

What i have learned over the years is that this inner capacity can be methodically trained and developed. It revolves around the ability to access three instruments of inner knowing both individually and collectively (Open Mind, Open Heart, Open Will). How to strengthen and scale that capacity is probably at the core of our global leadership challenge today.

It is also the focus of a new massive open online course (MOOC): the MITx U.Lab, which so far has 42,000 registered participants from 183 countries, working in self-organized groups around the world. You can join that platform if you choose to do so: it's online, free, and allows you to leverage your current initiative for profound change in the context of a global change maker community. After all, it will take many of us to transform the ego-logic of the fish, that rots from the head down, to the eco-logic of the swarm, in which intelligence and leadership is distributed throughout the entire system.

Thanks to Adam Yukelson for commenting on a draft of this piece.