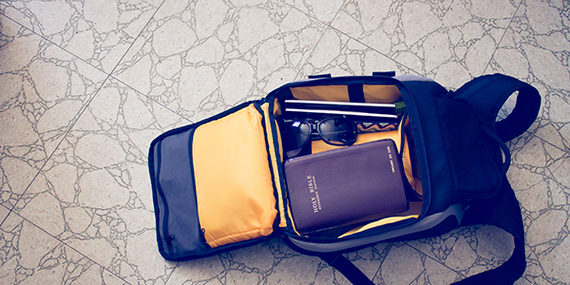 If you're gonna jetset around the world multiple times a year every year, you're going to need some serious gear. This hobby practically requires a bag fetish.

There's no right or wrong bag, but certain types of bags definitely prove useful, over and over. And that's because there's all different sorts of travel functions they service. The most important thing to remember about buying the right gear is whether they suit your travel patterns and not, for instance, whether the suitcase is an American Tourister or a Tumi. (That comes later.)

I generally bring at least two or three different types of bags--the more specialized gear can often crossover into multiple categories--depending on the purpose of the trip. For instance, the Lo & Sons O.M.G can double as a personal item and a weekender. Making sure you've got several different types of bags on hand will pretty much ensure you'll be covered in any situation.

Gals have personal items and dudes have murses. Messenger bag, laptop bag, purse: these all have the same thing in common. They're designed to stash common, basic everyday items into a nice little portable carrying container. Sometimes, they even go above and beyond by accommodating extra gadgets like laptops and DSLRs. (At least, the best ones do.) After all, who feels comfortable checking in thousands of dollars' worth of gear? No one.

If you want one that takes it to the next level, the best personal items are designed with a luggage strap that will attach to a suitcase handle that often doubles as an extra pocket when it's not being used like that. This feature does generally seem to be less prevalent on men's bags than it is for women's bags, though for reasons I still can't explain.

Backpack
Forget Jansport and Herschel. I'm talking real bags made for real people for real adventure, not a schoolbag. In my world, real backpacks come with pockets--the more, the better to give everything a home--with tough-as-nails construction that will withstand half a million miles and a proper hip suspension system for lots of long-term walking (and running). Some people swear by a suitcase but I live pretty firmly between both worlds, since I do both adventure and business travel on a regular basis.

The differences between suitcases and backpacks are pretty extensive. Usually, most people that opt for a backpack choose one for its mobility. There's nothing like grabbing a backpack from the overhead bin and catching the next connection effortlessly. Or running to catch my bus without the added burden of dragging a box. If I know I'm going to be constantly transitioning between many hostels, hotels or Airbnbs, I prefer a backpack to keep mobile.

Sometimes a purse just won't cut it. I'm talking about a bag that holds needed supplies for the entire day. Water, maps, snacks, a light jacket, small umbrella, a portable battery and even some light hiking gear. If need be, it can even double as a small overnight bag, though that shouldn't be its main purpose. Generally, most ideal daypacks should have a volume capacity of around 20L. The biggest purse or murse can do all of this if all you're doing is urban trekking. Forget about it for real walking or day hikes, though.

Personally, I have the collapsible REI Stuff Travel Pack and the Sea to Summit Ultra-Sil Day Pack because it folds up easily. (I prefer the REI for reasons I'll elaborate in another post.) The best thing about throwing them into my backpack, suitcase or weekender is that I can unfurl it for souvenirs when I've run out of space everywhere else. Then, should things get dire: I wear it in front if I'm running around with my main backpack, which is really great for weight distribution and balancing two loads. Look at me, I'm a turtle! Or preggers.

Though structured daypacks are generally more comfortable to wear, collapsible ones will have the added benefit of saving you packing space. Besides, it's not like you're using this bag every single day as a normal bag (see: personal item).

Suitcase
Even Peter Pan has to grow up. As much as it's great to be a "digital nomad" (truth be told, the term just makes me want to throw up), there are functional limits. Suitcases are great if you're going to be relatively static on the itinerary, 'cause they're great for keeping formal and business clothes wrinkle-free. But there are some downsides to wielding a suitcase and for some reason, leapfrogging from train to chicken bus isn't something I think when I think suitcase.

Personally, I think the only suitcase size that matters is getting one in a carry-on size. Most people should aim to fit what they have in that frame, whether they're going for a week or for a month (just wash clothes for hygiene). The only time I ignore this exception is I'm moving cross-country on a jet plane with a whole life's worth of belongings. Now, that's a different ballgame.

Weekender and/or Duffel
Duffel and weekenders bags aren't necessarily the same, though they often serve similar purposes. Weekenders are generally built for one to three days of travel--hence the name--whereas a duffel bag can sometimes be a bit larger and accommodate anywhere from one to six days of travel. However, the main point for both weekenders and duffels is that they're built for short-term travel and aren't always air-travel-friendly.

In particular, these bags are great for road trips. It's definitely gonna be a little weird if I show up to the Hamptons in a suitcase. Or dump picnic supplies into it. Let's take a drive to Tahoe and go hiking for the weekend in our vacation rental with a suitcase, said absolutely no one ever. They're probably the least ergonomic but they're often the most versatile.