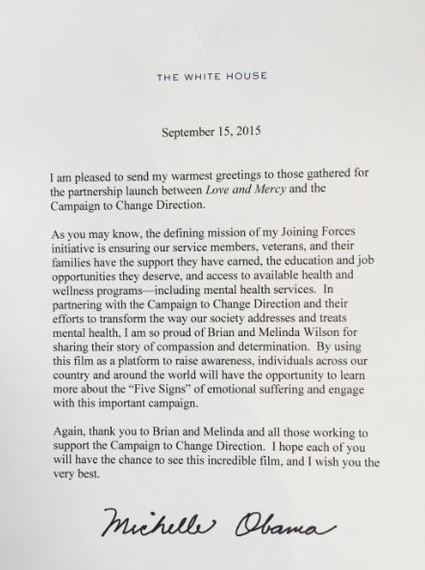 
"Not feeling like u?"
"Feeling agitated?"
"r u withdrawn?"
"Caring for yourself?"
"Feeling hopeless?"

These are Five Signs that may indicate that someone you know is suffering emotionally and may need help. Each has an emoticon that depicts the sign. They all can be understood and can serve as a bridge to reaching out to someone in trouble.

..........
First Lady Michelle Obama (FLOTUS) and President Obama (POTUS) each have spoken out with their support of The Campaign to Change Direction (www.ChangeDirection.org). The 5 emoticons for these signs can be viewed at their website.

FLOTUS's letter (shown here in full) states "...individuals across our country and around the world will have the opportunity to learn more about the 'Five Signs' of emotional suffering and engage with this important campaign."

POTUS, at the National Convention for Veterans of Foreign Wars, adds his unequivocal support for recognizing the signs of mental distress and being able to respond to those who are suffering -- pick up video at 28:20 to hear the President speak about the 5 Signs). And the numbers of people with mental problems, and their families, are legion, as both the Obamas recognize from the unending news of suicides, violent acts, and human and economic costs from untreated mental conditions in this country.

At first I thought, oh, another campaign, that's a good thing but we have many of those. But then I discovered what's different about The Campaign to Change Direction.

First, it amplifies the work of 150 organizations (to date, and growing). Each participating organization signs on to spread the Five Signs to their specific audiences and constituency. Partners include The National Alliance on Mental Illness (NAMI), Justice for Vets, Easter Seals, the Federal Substance Abuse and Mental Health Services Administration, The American Foundation for Suicide Prevention, Bell Canada, The National Council on Behavioral Health, Active Minds, The JED Foundation, The National Association of Drug Court Professionals, The American Red Cross, The American Psychiatric Foundation, The American Academy of Child and Adolescent Psychiatry, The American Psychological Association, Aetna, and many others. The idea is to accelerate change through collective impact. The Campaign's goal is to reach 30 million people in 5 years; they reached 15 million in six months. That's collective impact.

Second, the Campaign capitalizes on the good will and generosity of notables. Having the President and First Lady is no small start. Another supporter is Brian Wilson (and his wife Melinda) whose fame dates back to the extraordinary success of The Beach Boys, where he not only sang falsetto but wrote and arranged much of their breakthrough music (Not So Good Vibrations: 'Love & Mercy' -- The Brian Wilson/Beach Boy Movie). Mr. Wilson has been vocal about his problems with mental illness and addiction, and his road to recovery. He will perform in concert outside of D.C. on November 4, with the proceeds to benefit Give An Hour (a national non-profit organization that provides free mental health services to our men and women in the military and veterans' communities). Give An Hour, now 10 years old, is the backbone organization of the Campaign To Change Direction; both are the creations of Barbara Van Dahlen, PhD.

I had a chance to speak with Brian and Melinda Wilson about the film, Love and Mercy (which starred John Cusack and Paul Dano, as the older and younger Brian, Paul Giamatti, and was directed by Bill Pohlad) and about the Five Signs Campaign to change the culture that surrounds mental disorders. 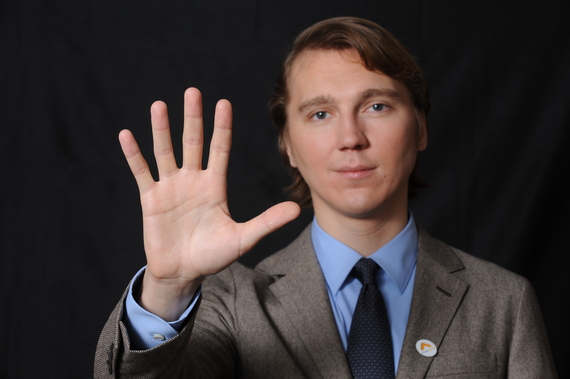 Mr. Wilson remarked that his creativity had an "upside extension" from his use of hallucinogenic drugs. But he was quick to add that the price to be paid, for him, was that it "...leaves you with hallucinations." The story in Love & Mercy, according to both Brian and Melinda, was an accurate rendering of his musical life, mental illness, and battle to recover (including the exploitation he experienced at the hands of an unscrupulous psychologist who later lost his license and had a restraining order preventing him from approaching Mr. Wilson). Mr. Wilson wants the film and the Campaign to encourage others to speak about mental illness, how treatment is available, and how there is hope for those affected -- "...they are not doomed".

As a psychiatrist, I asked Mr. Wilson what he thought about another class of drugs, namely psychiatric medications. Was he on them? Yes, for depression, anxiety and sleep problems. Did they help? Yes, the newer medications have fewer side effects, he added. Did he think they limited his creativity today? No, but he thought he was receiving "mild" doses that helped and did not mute his mind. Seems like he now has the good treatment that eluded him early in his illness.

Changing human attitudes about anything is hard; we all resist change, especially if we don't understand what is happening or feel helpless to do anything about it. Campaigns that foster understanding and offer clear and simple ways to act are among our best hope. They can spread the word that mental illnesses (including the addictions) are prevalent, not the product of weak character, and that recovery is possible when hope combines with loving support, good treatment, hard work, and the tincture of time. That's a song worth singing.

The opinions expressed here are solely my own as a psychiatrist and public health advocate.

Dr. Sederer receives no support from any pharmaceutical or device company.