Each winter, the waterfalls of northern Illinois freeze, creating spectacular formations of ice just begging for exploration. This year's icefalls were fleeting. Due to the fluctuating warm/cold temperatures, they appeared in a matter of days, and were gone just as quickly. With a bit of planning, and cooperation from cold weather, I was able to photograph them at their peak. 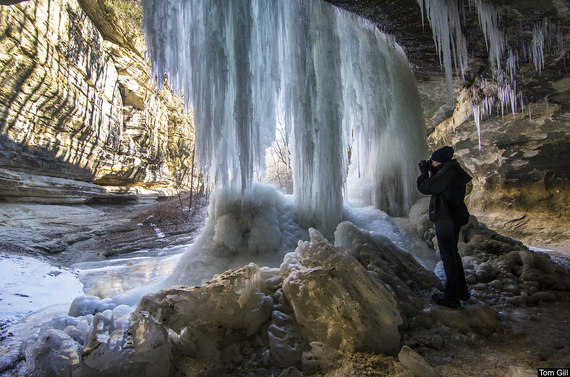 North central Illinois is home to Starved Rock and Matthiessen State Parks, two recreation areas near Utica, a town along the Illinois River. Over time, the river and several feeder streams cut into the rock of this area, forming deep canyons. At the head of many of these canyons are waterfalls, and while they're not rushing falls, they are seasonally active. In winter, even a small trickle of water can eventually form a huge icefall, which is the case with these particular canyons.

Most of the icefalls are hidden from passersby, requiring park visitors to hike into the blind canyons to discover them. The icefalls often reveal themselves dramatically after hikers round the final turn in the canyon, so the condition of the ice is never known until the last minute - but still worth the hike even if the ice has not yet formed. 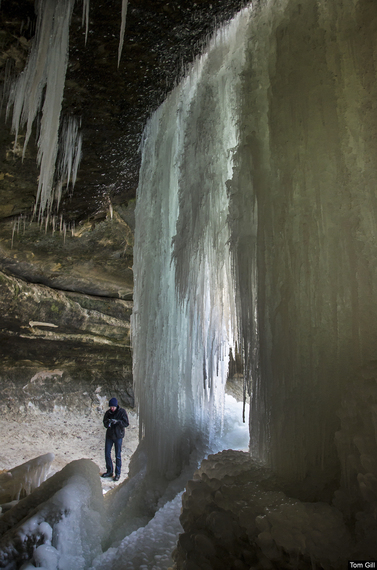 Our search for frozen waterfalls brought us to Starved Rock's LaSalle canyon. Shallower than other canyons in the park, it creates one of the more dramatic icefalls. LaSalle Canyon is one of the few canyons in Starved Rock State Park where one can easily walk behind the waterfall, whether it is frozen or liquid. In fact, the trail leads hikers under the canyon's rock outcropping. This provides a unique view of the canyon in any season. Many of the other falls can be accessed from behind if hikers don't mind crawling, climbing, or getting wet.

This canyon is a bit of a hike from the visitor's center, and in wet times of year, a waterfall of approximately 20 feet cascades into the canyon. In winter, the falling water freezes into intricate and very large ice formations. The large undercut in the rock creates a shelter under the falling water, where visitors can hike. When frozen, the falls create an ice cave of sorts, giving hikers the opportunity to see the ice from behind, illuminated by the light of day. 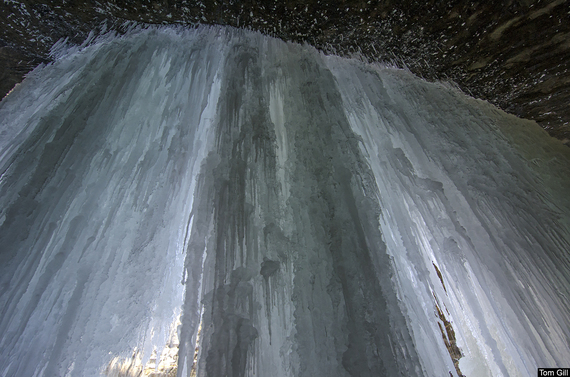 During recent cold periods, the waterfalls froze, creating pillars of ice that clung to the top of the rock outcroppings - much like stalactites in caves. The water that dripped to the ground gathered and froze, creating mounds of round ice much like cave stalagmites. Eventually they joined together to form a thick column of ice. 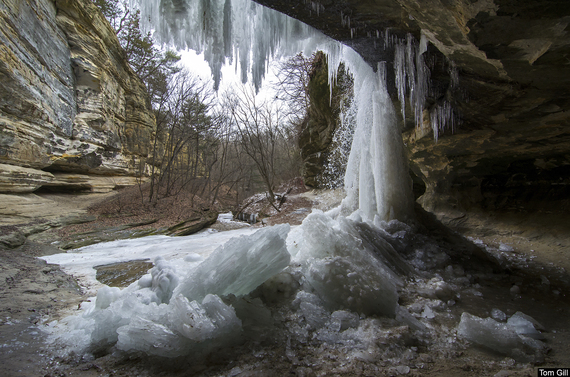 The current warm periods of weather melted the columns of ice a bit, and they have fallen to the ground in piles at the base of the falls. These chunks of ice measure about four feet in length and more than a foot in diameter. The intricate patterns created by the dripping water made these columns appear like giant mineral crystals.

One of the tallest icefalls at Starved Rock is in Wildcat Canyon. At an estimated 80 feet tall, this icefall grows to approximately 20 feet in diameter, and dwarfs anyone nearby. It's common to see ice climbers attempt to conquer this frozen waterfall. See my post from last year. 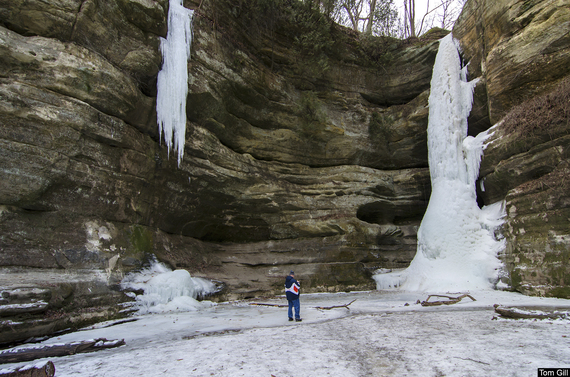 Wildcat is one of the few canyons in the area where hikers can view the canyon from almost every direction, top to bottom. Many of the canyons are accessible from the floor only, but Wildcat gives visitors the option to look into the canyon from the rim, high above. 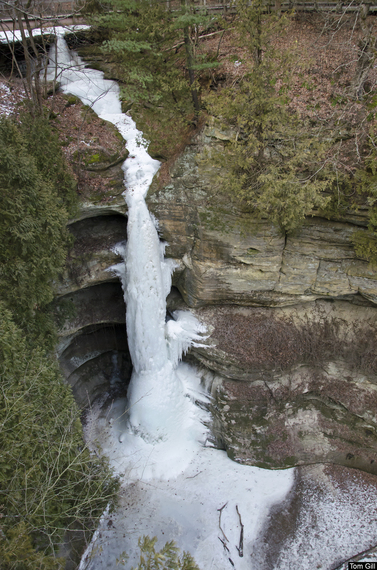 With a bit of determination, I climbed up the icy rock and onto the first canyon shelf behind the icefall, for a unique look up at the falls and the canyon ceiling. 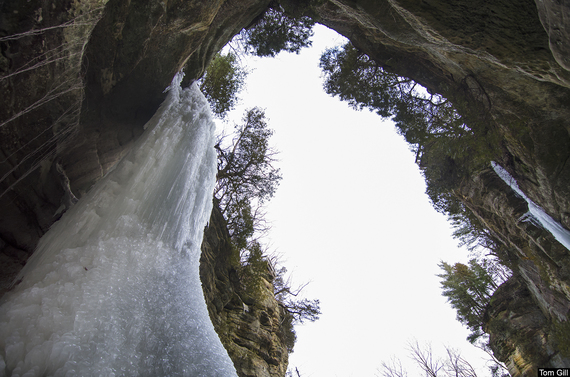 Up close, the intricate patterns of ice come into view. With every drop of water from above, tiny icicles form on top of each other, from the overhang and from the ground, until the lacy ice interlocks and forms the giant icefall.

Wildcat Canyon is one of the easiest canyons to reach at Starved Rock State Park. It's rather close to the visitor center, and the trail from the lodge is fairly flat and easy. But visitors should be prepared for plenty of stairs if they plan on heading down to the floor of the canyon. 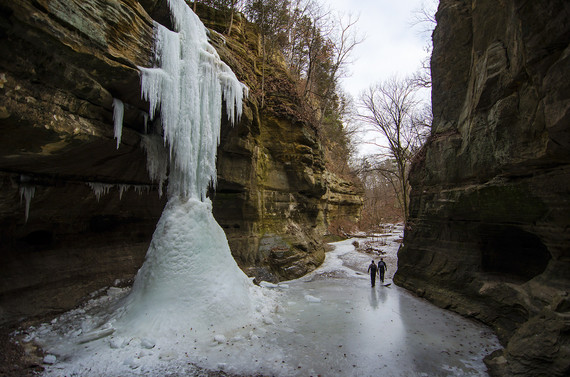 Next on the list was Tonty Canyon, a blind canyon with two waterfalls, one being about 60 feet in height. This canyon is tucked away and a bit of a trek from any parking area, but worth the hike. Following the often narrow trail that winds about 20 feet above the canyon floor can be a bit tricky in wet weather, but add ice and it becomes dangerous. The danger was so evident during our visit that park officials had closed the trail on one end, forcing us to walk to LaSalle Canyon first, just to double back to Tonty. And of course, leaving the canyon meant doubling back again through LaSalle. 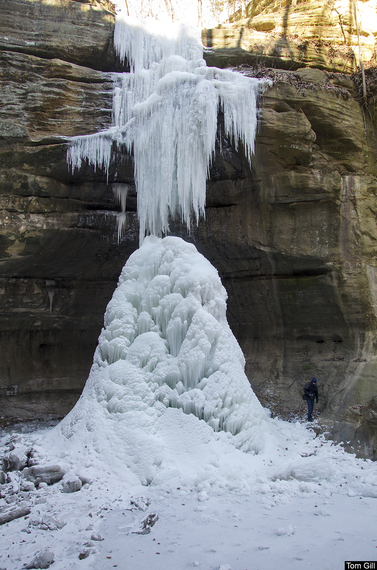 The two waterfalls were frozen, but this one in particular was more complete and ornate in its ice formations. The melting snow above fed the icefall, and temperatures below freezing helped to build the icefalls. 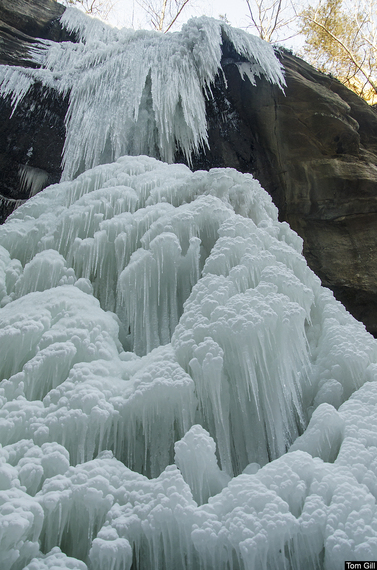 Quite a distance away, Ottawa Canyon is a blind canyon with a generally low flowing waterfall approximately 50 feet in height. The low flow portion of this waterfall is evident in the giant icicle pictured below. This ice formation is at least 40 feet long. 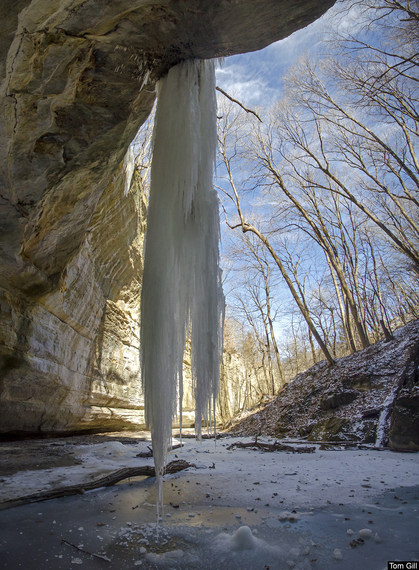 The ice formation stretches from the rim of the canyon to a point 4 inches short of the floor. If the water was more plentiful, the ice would have built up from the bottom as well, since the falling water would freeze and pile upward. We see this in most every other waterfall in these canyons. 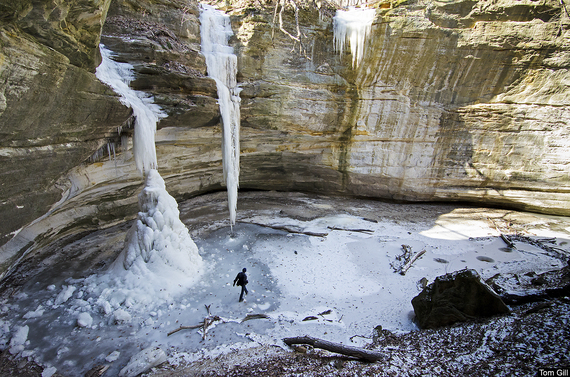 The main portion of the icefall in Ottawa Canyon is formed in a more typical manner. Ice hangs from the rim and ice builds from the floor until the two meet. This canyon is such that visitors can easily walk around the icefall and see the formation from all angles. The size of the column of ice is impressive. 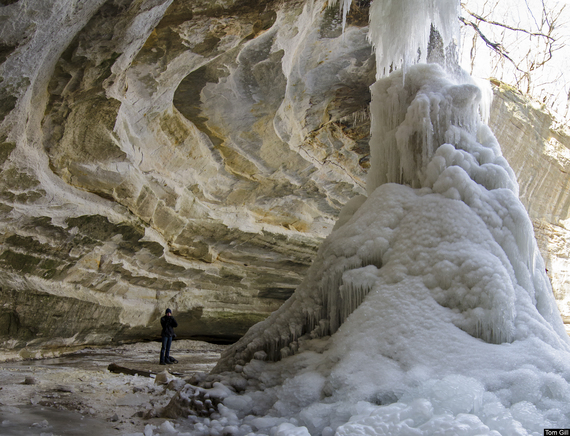 Other interesting features of this canyon include the horizontal bands of color in the rock. This provides a great contrast to the vertical ice formations. When sunlit, the dark bands take on a warm hue against the bands of cooler colored rock. 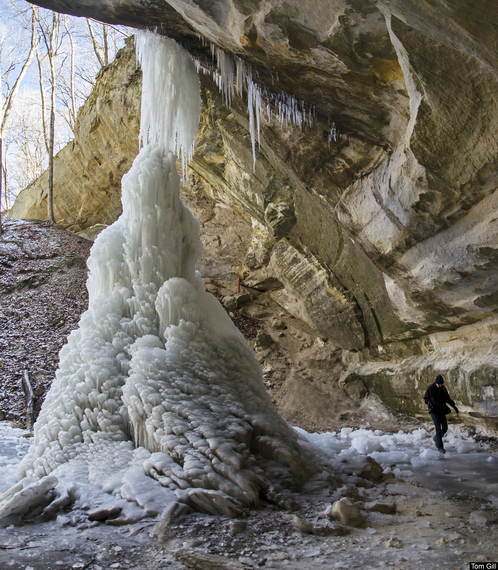 The difference between the two types of ice formations can be easily compared in the photo above. One formation took shape from the top down and the bottom up, while the other formed only from above. We made certain we kept a safe distance from the hanging formation, figuring it was much more unstable than the others, and realizing that its crumbling onto us could prove fatal.
Coming up in Part 2: The Icefalls of Matthiessen State Park.