Everyday for the past week there has been another tragedy to report in the heartland.

Overnight the Mississippi River washed over fertile farmlands near St. Louis and worries emerged that it would take years for the land to be reclaimed. Five additional levees are under threat of breach today, Thursday, according to the St. Louis District of the Army Corps of Engineers.

As tragic flooding is playing out in the Mississippi River Basin, it is becoming clear that what happened in New Orleans was not an act of God, or of Mother Nature. Nor can it be blamed on the people who have lived on the Delta since the Acadian Diaspora, or other low-lying areas in the United States. What happened in New Orleans, and what is happening today in the heartland, is the result of a massive infrastructure failure, lax federal engineering, and the siphoning of tax resources into the war economy.

"Ever since Katrina, the citizens of New Orleans have been blamed because some parts of the city are below sea level," says HJ Bosworth, Research Director for Levees.Org in New Orleans. "What happened in New Orleans could happen anywhere, but this problem had not been addressed until the recent Midwest flooding," Bosworth said. 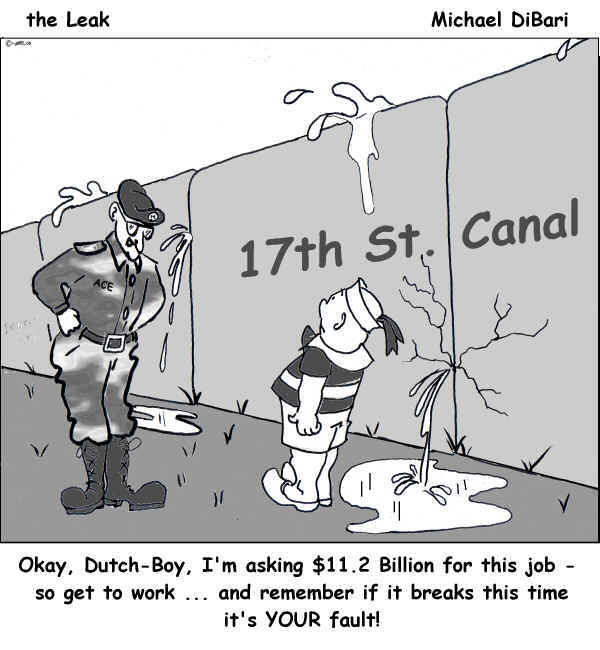 With thousands of miles of levee systems stretching across the United States, a whopping 43 percent of the US population lives in counties with levees, according to a briefing provided yesterday to by the Association of Flood Plain Managers. The briefing was given to members of the Congressional Hazards Caucus late Thursday afternoon. 122 levees were declared deficient by the Army Corps of Engineers in 2006.

Responsibility for the design and construction of the most critical levees in America belongs, by law, to the US Army Corps of Engineers.

To illustrate this point, Levees.org points out there are 3,786 flood gauges in America spread fairly evenly throughout the country.

Watchful eyes are now looking downstream on the Mississippi River as sandbagging has begun along the Morganza Spillway in Central Louisiana. Louisiana. Governor Bobby Jindal called out the National Guard for the first time to assist nervous farmers in the area. If the Mississippi starts to flood, the floodway (release site) would be used to divert water from the Mississippi, into the Spillway and finally into the Atchafalaya Basin.

Bosworth said that as of yesterday, reports from the Amy Corps of Engineering did not indicate trouble for New Orleans.

"The river was 6 feet higher two months ago and we were not that concerned since the levees here are 22.5 feet above the Gulf. Since the lower Mississippi river has been fairly dry, the overall effect of the flooding up there is not expected to be that great here. We will know in about two weeks for sure," Bosworth said. He added that the Corps had been wrong before.

However, real time flood gauge readings and extrapolations on the NOAA Weather site show the possibility that the Mississippi will reach "action stage" of 30 feet on June 24 in Baton Rouge. 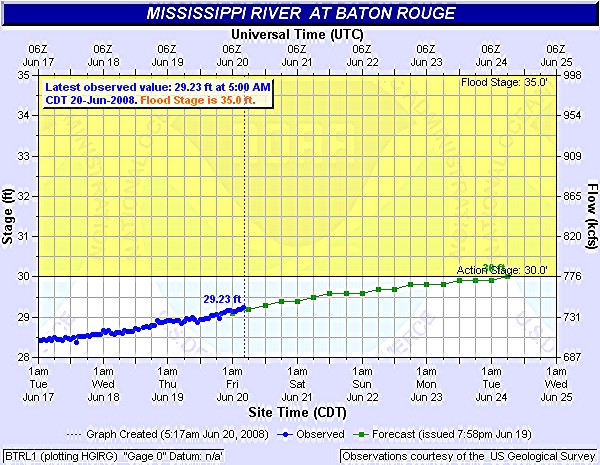 When told about the latest extrapolations, Bosworth said the high water was coming sooner than expected, but that so far he was not concerned, since there were still options available to relieve the flow volumes.

Another Call for an 8/29 Commission

Yesterday, the Southeast Louisiana Flood Protection Authority-East, the body governing levees along the east bank of the Mississippi River, passed a resolution calling on Congress to establish the "8/29 Commission." The resolution was first proposed by the grassroots organization levees.org in 2006, one year after Hurricane Katrina's floodwaters devastated New Orleans. Louisiana Senator Mary Landrieu (D) drafted legislation which would create the independent commission to investigate the reasons behind catastrophic levee failures in New Orleans that killed over 1200 people. To this date, Republicans have blocked the bill and it is languishing in committee.

Authority Secretary John Barry, the author of Rising Tide: The Great Mississippi Flood of 1927 and How It Changed America, proposed the resolution.

"I'm really asking that they take a comprehensive look at the entire Mississippi River system, the entire Mississippi valley, from New York State to Idaho," Barry said. "They should look, for instance, at the dams on the upper Missouri River in detail, because they have a real impact on the amount of sediment that's carried in the river, which has a real impact on the erosion of wetlands in Louisiana."

Sandy Rosenthal, Director of Levees.org, charged, "Civil engineers have the knowledge and the tools to predict flooding. This flooding is in most cases mere feet higher than usual. This is not flooding of biblical proportions yet tens of billions of property and livelihoods are lost."

Rosenthal says that the current flooding reflects "exactly what happened in New Orleans three years ago."

Meanwhile, deep in the neighborhoods of New Orleans, residents are still cautiously eying the Army Corps-termed "little wet spot" that appeared in the 17th Street Canal levee in May. Water can be seen leaking through new sheet piling and mortar is crumbling. This is a new levee that was built after Katrina.