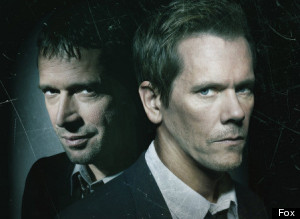 Whether or not you think serial killers need more exposure on television, whether you think "The Following" (premieres Monday, January 21 at 9 p.m. EST on Fox) exploits or merely reflects Americans' appetite for violence, there's an even more basic question at the heart of this drama.

Does it make any sense?

Here's why I ask: The show's premise is that imprisoned killer Joe Carroll (James Purefoy) has been able to convince his acolytes to follow elaborate orders that include murder, kidnapping and a host of other crimes. Of course, there have been instances of cult leaders inducing their followers to commit heinous acts, but that persuasion has typically taken place in person.

Here, we're expected to believe that Joe, a mass murderer under lock and key, was not only able to regularly access the Internet without anyone noticing, but that he was able to use those online connections to persuade people to do his bloody bidding. Investigators, including Ryan Hardy (Kevin Bacon), discover that Carroll got occasional prison visits from cult members, but his influence appeared to be most effective and extensive online.

Can a number of people, even disturbed or angry ones, be convinced to murder at the click of a mouse? Can the kind of obsessives attracted to a convicted killer be trusted to follow elaborate directions and pull off complex crimes without tipping anyone off? "The Following" rests on the assumption that this is all plausible, and that's just one of the cynical assumptions at the heart of the show.

Another one is that literary allusions can class up yet another tale about people who like to torture and kill, more or less for kicks. In "The Following," there are lots of allusions to the work of Edgar Allan Poe, but it's all the kind of sophomoric, uninspired analysis that would earn a college student a B- (at best) on a mid-term. Given that this show was created by "Scream" writer Kevin Williamson, there's the usual showy deconstruction of scary-story cliches, but that deconstruction just draws attention to how hollow this project is. The victims and their suffering really don't matter; they're just fodder for Carroll's fantasies and Bacon's obsessive need to catch him. Even Carrolll's running commentary notes that these are tired cliches.

Eight years ago, Fox aired a serial killer drama called "Killer Instinct"; it was so craven and misogynist that one of its stars, Chi McBride, later referred to it as "Kill It, It Stinks." "The Following" may have higher literary aspirations, better aesthetics and a more famous cast, but it's really just the same old creaky story. In the second episode of "Killer Instinct," a young woman was murdered and her eyes mutilated. Not surprisingly, that also happens to be Carroll's preferred methodology, one that the show dwells on at length. (And yes, majority of the victims mentioned or seen in the first two episodes are women. I wish I could say that came as a surprise.)

Why the eyes? Something about them serving as the windows to the soul, etc. "The Following" may have pretensions of examining the dueling psychologies of Carroll and Hardy, but the truth is, those kinds of deeper questions don't matter that much to "The Following." Getting to the next corpse-strewn scene does.

Purefoy, Bacon and Natalie Zea (who plays Carroll's ex) are good actors, but their performances are reminders that they deserve projects that actually do examine human weakness and the dark corners of the soul, instead of one that merely takes the occasional talky jabs at those subjects.

Ultimately, my dislike for "The Following" has less to do with its gore factor than with its essential laziness, silliness and pretentiousness. Certain aspects of the plot don't make much sense (it's not a good sign when you keep thinking of leads that the investigators ignore for long periods), but that's really the tip of the iceberg. "The Following" wants to tell, not show, when it comes to the creation of Joe's cult, and it expects me just to buy what it's selling regarding its superficial "killer Internet cult" premise. That's just one storytelling shortcut too many.

In a painful piece of exposition in the second episode, we're told that technology and the Internet are driving us all apart, and that's what allowed Carroll to seize on his followers' alienation and loneliness and ultimately turn them into his zealous servants. Actually, there is an entity that's using an easily accessed communications medium to test the assumption that people are essentially sheep.

It's not just Carroll trying this idea on for size, it's the Fox network.

For more on "The Following," read my colleague Laura Prudom's interviews with Kevin Bacon and with James Purefoy.

Ryan McGee and I discussed "The Following" and "Spartacus" in this week's Talking TV with Ryan and Ryan podcast, which is available here, on iTunes and below.

'The Following' Review: A Cynical Look Into The Heart Of Darkness
Midseason 2012-2013

1 / 48
"The Biggest Loser"
Returns Sunday, January 6 at 9 p.m. EST and moves to regular timeslot on Monday, January 7 at 8 p.m. EST on NBC <strong>What's Ahead</strong>: Jillian Michaels! She's back to help whip contestants into shape. Plus, for the first time, kids (ages 13-16) will be on the show along with 15 adult contestants.
NBC