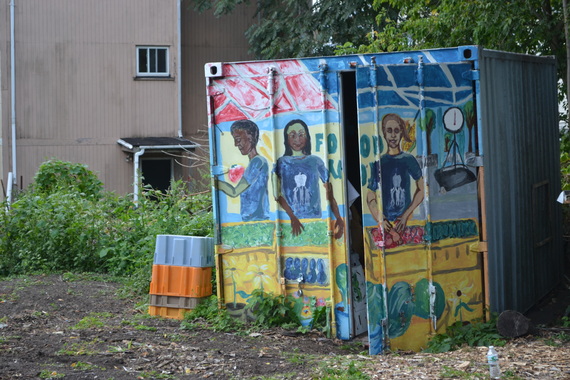 There is something a foot in the food movement beyond locally sourced goat cheese and CSA shares being snapped up by eager families in America looking for real food. Some who have long been championing these small batch producers are focussing on how we solve the large web of food production for everyone. The Food Project based in Lincoln and Boston, Massachusetts has been focussed on growing food in the inner city and educating inner city kids on how to farm for almost 25 years. They are now running a Winter and Summer institute to teach other people around the country how community voice in food production can make a serious impact.

When I sat down with Sutton Kiplinger, Greater Boston Regional Director of The Food Project, she narrowed in on the challenge for the food movement. "How do you build a system in which farms can thrive and low-income consumers can get what they need? That's the nut that nobody's been able to crack but we're working on it."

What is the Boston Food Project's mission?

Our mission is personal and social change through sustainable agriculture. The genesis of the food project was recognition that there are so many divisions in our society: race and class and gender and age - and that division perpetuates inequity and increases it. That is a huge problem for our world in so many different ways, and one of the ways we see it playing out is in the food system.

At this point in time, we really have a food system that is built for profit at the expense of the health of people and the health of the land. That is essentially what we're looking to change. We think of a food system as an ecosystem. It's a web of incredibly complex relationships that are really out of balance right now. We're trying to rebalance some of those relationships.

The core of what we do is that we bring together diverse groups of youth to work in partnership with adults on our sustainable farms, growing food that is made accessible to people who otherwise wouldn't be able to afford and access it. In this very concrete way, youth and adults from very different backgrounds are coming together in partnership to meet basic needs and work on this sort of fundamental problem. How much are you growing?

What percentage goes to for-profit?

About sixty percent of our total production generates revenue for the organization to sustain our operations and forty percent of it goes to various kinds of mission-driven outlets.

Does that sixty percent go entirely to funding what you do?

Exactly. We are a non-profit and it basically sustains the farms as a platform for the youth development work to happen.

How does a young person participate here?

Youth ages 14 to 17 enter our intensive seven-week summer program called Seed Crew. It's an employment program where they are paid for participating. It's full time.

They work really hard on the farms. During those seven weeks, they do a lot of farm work and are instrumental in growing the food. They spend time through a series of workshops and other curricular activities understanding core concepts of food justice, anti-oppression, and social justice issues.

One thing that's really unique about The Food Project is that these very diverse groups of youth are supported in talking with each other across difference about topics that are often pretty hard to discuss with people whose experience of life is different than yours.

Who helps develop and train these young farmers?

We have an incredible youth development staff who really facilitate that whole experience, and it's also something that everyone in the organization supports in various ways. Our farmers are incredibly gifted farmers and also youth workers on the side, which is pretty cool. Our Seed Crew had 78 youths this year across Greater Boston and the North Shore. Then a subset move on from Seed Crew into a variety of other experiences in the organization.

During the academic year, they can participate in what we call the Dirt Crew, where they deepen their experience and understanding of the topics that they were exposed to during Seed Crew. They continue doing work on the farms. They begin leading groups of adult volunteers on the farms so that they can translate their understanding and knowledge of how the farms work and how people can engage with farming.

After people go through Dirt Crew, they go on to Root Crew in the summer and through the academic year. It's essentially our most experienced cohort of youth and they can be with us for multiple years - for multiple summers and academic years - and they're responsible for the bulk of our community engagement and community-facing work: they're building gardens for neighbors. They run a series of food justice workshops both for other youth organizations and for neighborhood groups. They're really at the stage where they are independent actors for the organization in the neighborhood. They're amazing.

Our big program day is Saturdays. They work all day on Saturday and then we also have kind of optional afterschool activities or work opportunities that they can participate in.

I heard your greenhouse is packed with kids from the Dudley Square neighborhood after school. That is true. That's another arm of what we do. While some of them are teenagers who are helping harvest or doing other work here, some are younger elementary-aged kids from the surrounding schools who have beds in our greenhouse that their school has used for growing and teaching them about food. One of the things that's amazing about the greenhouse is that it really is a community gathering space, and there are so many kids who come here to hang out.

How did Dudley Square come to be the farm space for the Food Project?

The Food Project was founded in 1991. We were working on land in Lincoln, originally on a piece of land at Drumlin Farm, a Mass Audubon property. We were founded as a partnership between a farmer from Lincoln and a minister from Roxbury. In 1995, we were approached by the Dudley Street Neighborhood Initiative which is the community development outfit in this neighborhood.

The Food Project was interested in connecting with urban communities and they were interested in having some people start farming this vacant land on Langdon Street.

What happens when a community and a farming organization come together? How do we foster this?

Community control of land and food production is an incredibly powerful thing and I would say it is unequivocally something that we need more of today. One of the fascinating things about working in Dudley in particular is that this is a neighborhood that has incredible interest in food and a lot of expertise around it. This is a heavily immigrant neighborhood: Cape Verdean families, Caribbean families, and if you walk around the neighborhood in the summer, it's just immediately apparent. There are so many people who are really farming entire vacant lots next to their houses. There is so much corn ready for harvest in this neighborhood right now and people grow squash and beans, and that was all here before The Food Project came to this neighborhood.

We really see our role as helping to support that neighborhood activity that was already happening. At the same time, you see all the classic indicators of a broken food system in this neighborhood: high rates of diabetes and hypertension and obesity and heart disease. All those classic signs that the food system is not working the way it should.

Can they buy food from you here? Yes. The majority of the food we grow in Dudley on our two acres goes to the farmer's market that we run at the corner of Dudley Street every Thursday from June through October.

The produce is priced for affordability to this neighborhood, which means that the prices are a good bit lower than you'll see, say, at the farmers market in Copley, and in some cases lower than our cost of production.

How do we scale what you are doing in America?

I think the first step is that we need to give communities control over land and food production. I think access to land, particularly in low-income communities, is a huge issue. There's so much interesting stuff that's happening in worker-owned cooperatives. We basically need to set up an alternative to the huge corporate control that we have of our food system right now.

I think that one of the things that The Food Project has always tried to bring into the conversation around food systems is that we have different choices we can make at every stage of the food production process, from seed to when it's on your plate. We have choices that we can make around the values that we express at each stage of that system.

Right now, the profit value is the primary value that's at play, at the expense of health and sustainability and community involvement. All of these things, when we really think about it, are things we value as a society, and I think what we've tried to do is introduce those other values into the conversation.

As a society, we do have choices about how to set up a food system. Profit is important and it's not the only thing that's important. We need to figure out how to build something that's sustainable but also honors these other interests.

For more with Sutton Kiplinger from @TheFoodProject, the full interview is at TheEditorial.com