We've pored over the myriad articles, columns and survey on what to expect in the world of food in 2011, and if the consensus is to be believed*, two things are clear: there will be vegetables, and there will be pie. Consider the evidence:

"Meatless Mondays & Tofu Thursdays: While it's hip to go whole hog, with butchers gaining star power and roasts as the focus of many a dinner party, there is a concurrent trend of eating less meat."

"I believe the future is vegetables and fruits. They are so much more sexier than a piece of chicken."

"More vegetables, especially if there's a crazy foraging story to tell about them or they're from some sort of roof top/urban garden)."

Gabriella Gershenson of Saveur in the same feature:

"Vegetables: They're back, for the very first time."

And And Grant Achatz concurs:

"Most of this is silly, but I agree, Vegetables will be the next focus."

"Pies are really coming back into style. We are seeing pies have their day in the sun because they are the ultimate comfort food. There is something so familiar about pie. In many ways, it can be a one-dish meal."

"Cupcakes Are Dead. Long Live The Pie! .. Trend-spotters are calling pie the food of the year. Texas and New York restaurants offer pie happy hours. Pies are showing up at weddings, and pie shops are opening in a neighborhood near you. Pies come in sweet and savory, maxi and mini, deep dish and deep-fried."

"If I had one trend -- one trend -- of the year that I could predict, that's why it's in the No. 1 position, this would be the trend for pie. I think that we're going to make room for pie shops in the next year. ... This is not just sweet pies, this is savory pies, bite-sized pies. They are even blended into milkshakes," he said. "I'll eat pie if I don't get this one right at the end of the year."

Pies of all types - hot and cold, sweet and savory - are increasingly popular. ... Page views for AllRecipe's pie recipes were up more than 20 percent from 2009. Ice cream pie was 2010's fastest growing pie type.

And the hard data: 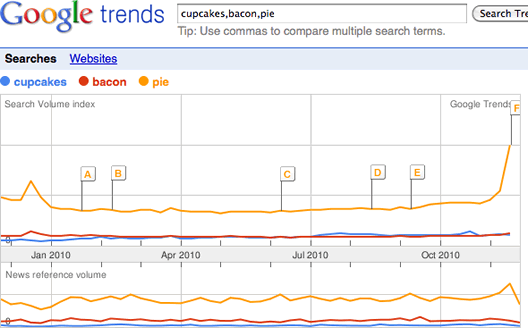 * Are you convinced? Should we expect more pie and vegetables in 2011? Tell us below.