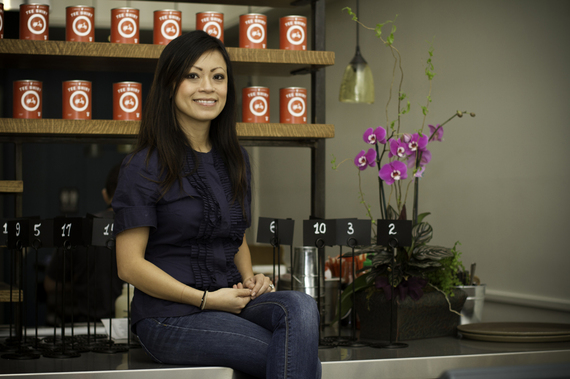 First of all, let's just admit this -- it's kinda fun to say Bun Mee.

The name is actually the phonetic spelling of bánh mi, a Vietnamese sandwich comprised of a crunchy French baguette and filled with any number of savory combinations of meat, veggies, and sauce. It's a popular street food in Vietnam where San Francisco resident Denise Tran was born, and happens to be the name of her first San Francisco restaurant, a pocket-sized sandwich shop that opened on trendy Fillmore Street back in 2011. The reviewers raved, the locals lined up, and the t-shirt collectors snatched up the restaurant's red-scooter logoed garment. And this month, the petit San Francisco restaurant and its equally petit owner have opened a second location in San Francisco's financial district.

"I want to celebrate the humble Vietnamese sandwich by taking traditional preparations and making it higher quality and better tasting as well as offer modern interpretations of bánh mi," said Tran.

Born in Saigon, Vietnam, Tran immigrated to the United States with her mother in the late 1970s as a war refugee, and grew up in New Orleans. A self-proclaimed overachiever, she graduated Law School at Willamette University in Oregon, then enjoyed a successful career that took her to Seattle and New York City. But a future filled with stiff blue suits and demanding billable-hours didn't inspire her. What did, however, was a trip to the East Village and a bite into a porchetta sandwich.

"I grew up eating Vietnamese sandwiches," Tran said. "Our family moved to an area of New Orleans East that was predominately Vietnamese when I was 13. The community there was self-sustaining and isolated from the rest of the city. It had its own farmers' market where people grew fresh organic vegetables in their gardens and could sell their extra produce, and my mom would get all the greens for the week. I would eat at least one bánh mi a day after school."

Tran calls her mother "an amazing cook who could whip together meals without recipes," and her father, she says, managed a Cajun-Creole restaurant called the Old Coffee Pot in New Orleans.

After two years of research that included a trip to Vietnam, several bi-coastal food tours, and countless hours in the kitchen her mother, Tran introduced San Francisco to one of her favorite things to eat using fresh California ingredients and Tran family recipes, and fulfilling a lifelong dream.

"My father was a passionate person who was great around people," she said. "He and I always talked about opening a restaurant together someday. Unfortunately, he passed away before I started Bun Mee, but his spirit is very much a part of what we're striving to do, which is to make sure people truly enjoy themselves and feel welcomed."

You can start by saying Bun Mee a few times. It really is fun.

1. What is your favorite food memory from childhood?

Any comfort foods that my mother made because she cooked a lot. There was one soup called Bún bò Huế that I particularly loved. It's a spicy beef soup that is different from Pho and originates from Central Vietnam where my mom is from. It takes nearly half a day to make. I would get to help her grocery shop the day before and dice vegetables and ingredients for the stock. It was a combination of being able to do something collaborative with my mom and tasting the delicious food that we made together that made this such a special treat.

2. You're moving to a new kitchen in five minutes and can only take one gadget along with you. What do you grab and why?

I would take my immersion blender so I could make soups, stocks and sauces.

I love fried chicken from Popeyes. In New Orleans, Popeyes was as plentiful as McDonald's but a lot tastier. I don't eat it often but every once in a while, when no one's looking, I head over to Popeyes on Divisadero and grab a 2-piece spicy chicken with dark meat and a buttermilk biscuit. I make a point of NOT telling my husband about it.

I'd like to see more interesting use of local vegetables and vegetarian items and a few less burgers. I think we've done everything we can with the burger.

5. Congratulations, you have carte blanche to dine in any city or country in the world! Where would you go and why?

Bangkok, Thailand because it's easy on the wallet, customer service is amazing, and the food is always fresh and delicious. There is so much variety and the street food is exceptional as well.