The Empire Strikes Back often eclipses the original Star Wars in popularity and sanctity. It remains the favorite of its leading stars, its legions of fans, and even most film critics.

Star Wars' commercial success in 1977 may have altered cinematic history, but it was The Empire Strikes Back that cemented the saga's legacy in 1980. The sequel confirmed the franchise as a timeless classic - a modern myth every bit as relevant today as it was thirty-five years ago.

As a culture, we need great myths. They show us how to dream. They help us realize our potential. They inspire us.

In essence, they give us hope.

While Star Wars is famously idealistic, one could argue that The Empire Strikes Back is the more realistic.

Instead of reinforcing the belief that good will triumph over evil, Empire dares to suggest otherwise, and in doing so, it strikes a haunting emotional chord with audiences.

Empire argues - quite successfully - that happy endings are only temporary. That life can be full of great pain. The good guys don't always win. And our difficulties rarely see closure.

Unlike its predecessor, The Empire Strikes Back discards the black-and-white clarity of fairy tales and explores the gray area in between, where the construct of heroes and villains is far more ambiguous.

More than any installment in the saga, Empire more closely reflects the world in which we live, and in doing so, our own humanity.

We are all Luke struggling to find our path in life, at times an eager student, a reckless teen, or a full-fledged adult full of regret. We are always searching for who we are, yet at the same time unwilling to accept it.

We are all Leia the moment love overtakes us, despite our walls, our trepidation, and even our better judgment. And we feel its pangs most when it's cruelly stripped away.

We are all Han when our past catches up to us, at exactly the moment we have the most to lose.

We are all Yoda disappointed in those who refuse to heed our warning or accept our advice, forced to sit painfully by and watch mistakes unfold, unable to shield those we love from harm.

We are all Chewbacca when a best friend is taken from us too soon, powerless to interfere, forced to accept the cruel hand of fate.

We are all Lando when we make mistakes, let down our friends, and attempt to reconcile only when it's too late.

We are all Vader when we try to reconnect with our past, but are only pushed further away.

There is no character who escapes the film unscathed. Be it puppet, droid, or Wookiee, all suffer equally in the pain of the human experience.

Even the film's open ending reflects the unspooling quality of life and the uncertainty of how things will work out. It's here in the quiet respite of our setbacks that we muster the hope for tomorrow. We may be subdued, but we aren't down for the count just yet.

Empire, like all great tragedies, resonates because it prepares us for life's greatest disappointments and its most painful truths.

It is no coincidence that Chewbacca holds C-3PO's disembodied head just like Hamlet holds a court jester's skull in Shakespeare's most famous tragedy. Both the prince and the Wookiee contemplate their own mortality - and ours - in the lifeless head before them.

Empire explores these depths in a scale both personal and epic - exactly the way life's challenges make us feel. What may be trivial in the volumes of humanity often feels larger than life in the moment, as if it's the only thing in the universe that matters.

In a key scene in the film, Luke tries to use the Force to pull his X-wing fighter out of the swamp, to no avail. Defeated, Luke complains it's impossible. However, with seeming ease, Yoda shows him how it's done. Luke stares wide-eyed at the improbable feat and says he doesn't believe it. Yoda says that is why he fails.

And that is exactly why The Empire Strikes Back succeeds. 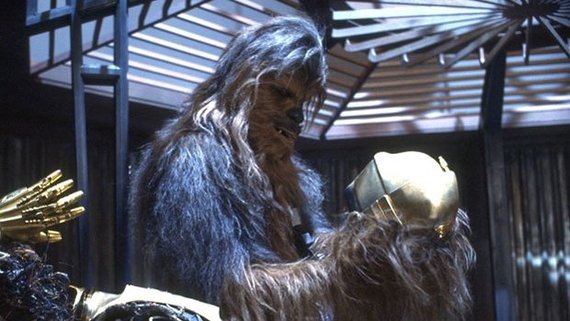