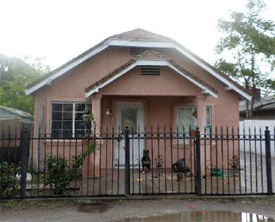 9.1 million homeowners are grappling with being seriously underwater (owing at least 25 percent more than their homes are worth) in an economy in which the average family's earnings are stagnant or dropping. With banks and other lenders frequently unwilling or incapable of providing real solutions such as principal reductions to keep homeowners in their homes, more and more families are faced with foreclosure. However, when lenders refuse to approve loan modifications and other solutions, borrowers have one final option: bankruptcy, the foreclosure kill switch.

Personal bankruptcies come in two flavors: chapter seven, a liquidation of all unsecured debt, and chapter 13, a reorganization which helps filers pay back their debts on a repayment plan. Chapter seven is generally reserved for low income debtors with little or no assets, and chapter 13 is for debtors with regular income. Chapter seven filers receive a temporary halt to foreclosure, while chapter 13 filers can often freeze the foreclosure action as long as they make their bankruptcy plan payments. However, chapter 13 plan payments often demand a high percentage of families' income and frequently prove challenging to keep up with. In either case, mortgage holders can voluntarily approve a loan modification at any time to keep a family in their home.

When a borrower files bankruptcy, an automatic stay is immediately put in place and creditors cannot proceed with foreclosure or other actions without the bankruptcy court's permission. Nevertheless, bankruptcy is not a panacea and typically provides only a temporary reprieve. Filing bankruptcy is similar to receiving immunity on TV's Survivor, enabling a contestant to live through the next Tribal Council, but not ensuring that they win the game. Similarly, filing bankruptcy enables a family to withstand the next foreclosure sale, but typically does not provide a long-term solution to their housing dilemma.

So, what does a family do when their lender denies a loan modification and instead insists on foreclosure? File bankruptcy. What happens a few months later when the lender has received relief from the stay and has court permission to reschedule the foreclosure sale? The homeowner files bankruptcy again, and again and again, sometimes deeding the property to other people or entities to circumvent laws designed to prevent serial bankruptcy filings. An unclassified report issued by the Federal Bureau of Investigation and U.S. Trustee Program concluded "with high confidence that as mortgage loan defaults and foreclosures increase, delinquent homeowners will become increasingly vulnerable to fraudulent foreclosure rescue and loan modification schemes that exploit the U.S. Bankruptcy System." The report goes on to detail the substantial prison terms which many foreclosure rescue operators have received for coaching desperate families through multiple bankruptcy filings as a means to stay in their homes in the hopes of receiving loan modifications. Serial Bankruptcy Filers are outlawed, but shouldn't Serial Loan Modification Deniers be outlawed as well? Certainly, many of the serial bankruptcy filings would not occur if all of the serial loan modification denials did not occur in the first place. Sadly, the Serial Loan Modification Deniers include all the nation's biggest banks, the "too big to fail" institutions which also appear to be "too big to prosecute." They get fines, yes, but they treat these as a cost of doing business and, all the while, families in need of modifications continue to be denied for one program after another, only to eventually be faced with a horrific choice: file bankruptcy or lose their home.

What is the solution? A recent study in the Florida Law Review found "that bankruptcy filings delay foreclosures but are not generally effective in curing payment defaults, especially when compared to modifications negotiated outside of bankruptcy, which are highly effective." Thus, the solution is substantial loan modifications which drop payments to an affordable level and reduce principal balances to an amount in line with current values. If the Serial Loan Modification Deniers cannot deliver these solutions, then they should sell these mortgages to American Homeowner Preservation or other entities more willing to modify and leave the families be where they should be -- in their homes.