Recent films and plays highlight critical alternative voices our history lacks. The Birth of a Nation, Chocolat, Suffragette and Red Velvet portray forgotten or unexplored people and events. This is only the beginning, I hope, of a groundswell of artistic review of history which should include David Fagen.

Fagen, an African American soldier, made headlines in the early 1900s when he defected to the Filipino side during the Philippine-American War. His story complicates the assertion that African Americans offered little resistance to institutionalized racism from the Civil War to the end of WWII.

But more than a historical counterweight, Fagen is compelling on a personal level. He could have justifiably told himself I don't have a choice, but he created one, and whether or not you agree with his decision - many do not - his radical action asks the question of how far we are willing to go to stay on the side of what we consider just. 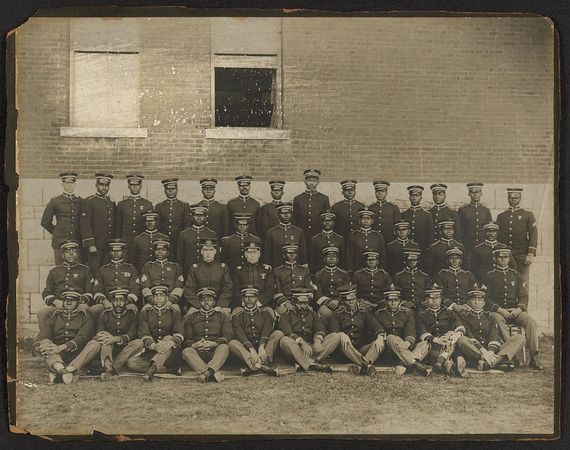 Circa 1900, US 24th Infantry. Fagen served in this regiment but this photo was taken after he defected. Library of Congress, William A. Gladstone collection

African Americans were engaged early on in the conflict. The US recruited and deployed black soldiers to the Philippines from 1899 to 1900 under the misguided and racist belief that they were immune to tropical diseases. Among the some 7,000 African American troops who deployed was David Fagen. There is little on Fagen's army experience in particular. But we do know that he would have deployed in a segregated army serving in the Twenty-fourth Infantry, a so-called black regiment. Fagen would have come into contact with army officials who used the same racial slurs to denigrate African Americans and Filipinos.

What's more, Fagen must have learned of the direct appeals to African Americans made by Filipino forces, urging them to defect by offering commissions and roles of responsibility. In November of 1899, he answered their call which ultimately required severing ties with home and family members, not to mention facing almost certain death if captured. But beyond defection is what Fagen did next. He not only left his post in the army, but joined the Filipino forces.

What motivated him? The treacherous position of African Americans as an oppressed minority at home fighting in the Philippines to quash an independence movement is documented in a collection of letters sent by black soldiers. Yet very little is known about David Fagen himself.

News reports and statements offer little clarity, since some journalists and officials sought to vilify him, while others were in awe. US General Funston, who made headlines capturing Emilio Aguinaldo, the leader of the Filipino forces, called Fagen "a bandit pure and simple, and entitled to the same treatment as a mad dog." In contrast The New York Times described Fagen as holding "the rank of General among the insurgents." Despite the fact that his troops addressed him as General as a sign of respect, he was actually a Captain. Further compounding the uncertainty is the fact that I could find no account directly from Fagen.

Even his death is shrouded in mystery. In 1901, Filipino leaders began to surrender but Fagen did not. The US army placed a $600 bounty on Fagen; a local hunter turned a decomposed head over to American authorities to claim the reward. But US officers were not completely convinced; the official military file on the incident is entitled the "supposed killing" of David Fagen.

Despite the epic nature of this story, I didn't find many recent articles, besides a few blog posts and a smattering of academic papers. Yet when I considered Fagen's position as a defector of the US Army, what was available was actually quite considerable. Fagen even made it into an Oxford University Press compendium of over 19,000 American biographies.

Popular culture is another story with no Fagen references in films or TV shows. Nonetheless, Christopher T. Wood, an actor who's made appearances in the films 40 Year Old Virgin and Friends with Benefits, has written a compelling and fast-paced screenplay, which brings to life with humor and emotion the challenges faced by Fagen and his fellow troops.

He wrote the script five years ago at a time he feels was much less favorable to his idea. He affirmed that "African Americans were often not portrayed in such complicated ways and therefore the films and stories about them would suffer." Now, he says, "there are so many young African American male names who have been established as more bankable." Still he points out that "our industry has left an inordinate amount of money on the table by not pursuing alternative stories."

Wood made a wry video highlighting some of the challenges the film may face in Hollywood; he plays the role of studio executive.

Wood sees Fagen as having "noble intentions, but as is typical for young men who try to find glory in war, became something of a nightmare." He surmises that "when you can get local fighters to follow you beyond the point where all the rest have surrendered you have a serious 'cult of personality.'"

In contrast, the creator of a detailed online history of the Philippine-American War, Arnaldo Dumindin summed up Fagen this way:

He knew he would hang if captured alive; his heart must have burned with a certain fervor that defies logic but is commonplace among men and women who choose to lead noble lives. David Fagen is one of my favorite Filipino heroes.

This is a story that deserves to return to the fore. It's about individuals caught in the crosshairs of race, identity and conflict. It's about all those who made different and difficult choices in a brutal and complex environment. And it's about the strengths and frailties of our own humanity and how that plays out in identity and culture in ways that are still relevant today.

If you liked this article, sign up to receive new posts by email at elizabethkissam.com.