There is a terrifying enemy threatening civilians in war-torn Afghanistan, Syria and Iraq. This is another foe besides the Taliban, Al Qaeda, the Syrian regime or ISIS. It's a silent menace that may yet be the most powerful.

It is hunger. Millions in Afghanistan, Syria and Iraq are suffering each day from the lack of food. Malnutrition claims the lives of infants. Those who survive are stunted physically and mentally for life.

The struggle to defeat hunger receives little attention. It's a forgotten war within the wars taking place in these three nations. Yet it's one we can do more to fight.

Chloe Cornish, a UN World Food Programme (WFP) officer, recently met an Iraqi Christian family that had been displaced by the terrorist army ISIS. It was Christmas, but there were no presents for the children. The family, left with nothing, is only able to eat because of aid provided by WFP.

They are among 2 million Iraqis uprooted from their homes since the onslaught of ISIS began. Many have escaped to Northern Iraq, but hunger comes with them. 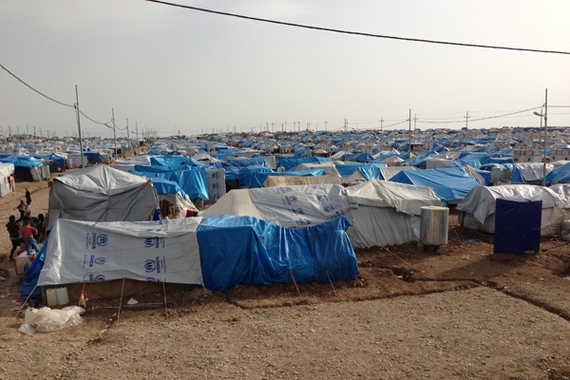 A camp inside Iraq for refugees fleeing the civil war in Syria. The WFP provides food aid at the camp. (WFP/Dina Elkassaby)

Iraq is also hosting refugees from the war in Syria. The Syrian Civil War, now in its 4th year, has destroyed food production.

Millions are trapped in war zones, with aid groups unable to reach some of the population because of the ongoing conflict. Millions of Syrians have fled to neighboring countries. They depend entirely on international food aid to survive.

Winter arriving has made life harsher for people around the globe, and this is most apparent in Afghanistan. People living in the Afghan mountains depend on food aid supplied before the snow limits access to these hard to reach areas. Conflict in Pakistan has displaced more people into these remote parts of Afghanistan. They need food to survive.

Low funding though has limited food aid for Afghans. UN Secretary General Ban Ki-moon reported in December that, "only 60 per cent of estimated needs can be met by the initial plans to pre-position food assistance for 750,000 vulnerable people in 54 remote districts."

WFP depends on voluntary donations to feed hungry Afghans, Syrians and Iraqis. They are short on funding and food will be reduced unless more contributions come in. Rations in Syria were already cut in 2014 because there were not enough international donations. These are huge wartime emergencies that require lots of funding.

The United States Food for Peace program is the largest single donor to WFP. How many Americans have heard of this program which feeds hungry Iraqis, Syrians, Afghans and millions of others across the globe?

The Food for Peace budget for this year will be near 1.5 billion. Just for comparison, the annual nuclear weapons budget is estimated to be at least 52 billion a year. Is anyone bothered by the difference in priorities?

The United States and other capable nations can do more to fund food aid around the globe. This is especially crucial during this time of war. There are millions of hungry people whose future is now depending on what humanitarian aid they receive.

We cannot abandon these hungry, innocent people in their time of need just because their plight was not in the headlines.

No peace has ever been built on empty stomachs. No lasting peace can be forged with a generation of malnourished and stunted children.

We need to remember this when we see these wars unfolding in Afghanistan, Iraq and Syria. We can do more to help. Every child saved is building a brighter future. By feeding the hungry we just might build the peace we all seek.