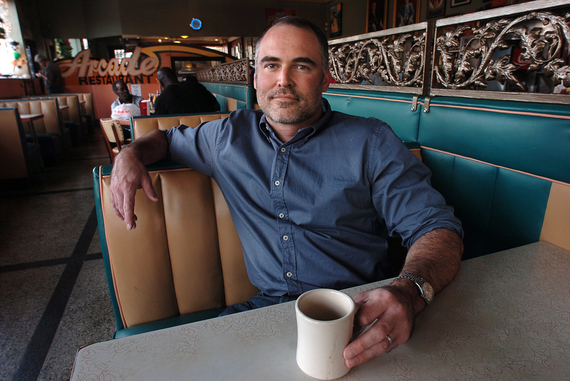 Ace Atkins has written 15 books over the past 15 years. A former college football star for Auburn University, he became a crime reporter for the Tampa Tribune, earning a Pulitzer Prize nomination for covering a cold case from the 1950s. He published his first novel, Crossroad Blues, at age 27, becoming a full-time novelist at age 30.

The Forsaken is the fourth Quinn Colson novel, a series which has won critical acclaim. Two books in the series have been nominated for Edgar Awards. The series features Quinn Colson, a retired U.S. Army Ranger who served in Afghanistan and Iraq. He has returned to his hometown, Jericho, in rural Mississippi, where as sheriff, he must deal with crime, corruption, and other elements of life in this small Southern town.

Did you always want to be a writer?

I became passionate about books when I was in high school. I discovered Ian Fleming. For a fifteen-year-old boy to discover the world of Ian Fleming was astounding. Not only were they great travelogues and adventure stories, but there were pages of descriptions of naked women. (Laughter). I also read books I should be reading: works by authors like Fitzgerald and Hemingway. Then I got into Chandler and Hammett, but Ian Fleming was my gateway drug into the larger world of loving books, which made me want to become a writer. I read about Fleming's life and thought it would be exciting to research things, travel to places, and write about new locations. Another writer I thought was fantastic was Gregory Mcdonald, a former journalist, who shaped the idea of my wanting to become a journalist. Fleming and Hemingway had of course, been journalists, too. I loved the idea of the journey of the hero.

It's been said your novels contain parts of yourself -- friends, colleagues, family members and personal heroes. Tell us a little more about this.

That's more related to four books written years ago: White Shadow, Wicked City, Devil's Garden and Infamous are all based on true stories. The first one was about a killing that occurred in Tampa in the 1950s. I'd been a newspaper reporter and was hanging out with retired cops and journalists who told amazing stories. So I wrote a book about it. The cops and journalists in the book were based on real people and experiences. In fact, when I was writing those novels, I got a really nasty letter from the son of one of the mafia hit men. He not so subtly suggested I write about thugs and rednecks from Alabama, my home state. I thought that was a great idea. So, the next book I wrote was based on members of my family who had a rather unsavory history. Those are the personal connections found in those four novels.

The Forsaken takes place in Jericho, Mississippi. Does this fictional town represent life in small-town America? Or is it emblematic of life everywhere?

I believe it's emblematic of small-town life in America. I think it's a very Southern novel. There are many issues specific to the American South, but I could adapt the story and change it to another region, like Iowa or Kansas. There are certain archetypal characters and power brokers existing in small-town America, everywhere.

Your lyrical writing has been compared to James Lee Burke's and Pat Conroy's. It's also been described as an accurate rendering of the Deep South in Faulkner country. What do you think of these statements?

James Lee Burke was an early influence on me. He taught me there are no limits to writing crime novels. You can be a crime writer and have as much depth and literary license as you want in telling these stories. He was one of my early heroes. I think it will take another fifty years before I can get into the realm of the skill set of a James Lee Burke and Pat Conroy. Living in Oxford, Mississippi, the world of Faulkner, has been helpful. What I really learned from him is to pay attention to the world around me. The people I write about are essentially the descendants of Faulkner's characters. Instead of their being at the general store or town square, I may overhear them in Walmart. I try to write about a modern South, not an embellished one. I learned from Faulkner and Flannery O'Conner that you find a lot of humor and characters, simply by observing people.

What do you think of James Dickey, especially his novel Deliverance?

I never met him but heard a great deal about him. He's a Southern writer icon. I'd love to have had some writing lessons from him. I've heard a rumor from a reliable source about the novel Deliverance. The story is that the manuscript actually came in to the publisher as one long poem. It had to be re-written into prose. His final novel, To the White Sea was just fantastic.

Is there such a thing as "Southern writing"?

Absolutely. I think there's certainly a set of themes and points of style emblematic of the Southern novel. I'm drawn more to the rough-hewn South, not mint juleps and the genteel South. The books that appeal to me are those by Faulkner, such as Intruder in the Dust. Another favorite writer was Larry Brown, now deceased, who wrote about the real, gritty, modern South. I think there's a certain comedic edge to Southern writing, including the works of Flannery O'Connor and Barry Hannah, a master of the Southern short story. The Southern landscape offers a tremendous amount of organic soil, rich with history. You don't have to go very far to find ugly, sordid events. As a writer, that's what you really want to dig into.

The dialogue in the Quinn Colson novels is strikingly authentic. How do you approach writing dialogue?

I think it goes back to observation. It derives from what I've learned as a journalist. The writers I've admired so much, Mcdonald and Hemingway -- were awesome dialogue writers. They had been journalists. So, my ear is always attuned to eavesdropping. I listen to people all the time. I've gotten so good at it, people don't realize I'm listening to them. I may be in the grocery store and find myself in aisle five, overhearing someone explaining a relationship issue. That can become part of a novel. It's a matter of listening to people really talk, not learning dialogue so much from reading other books or watching movies. I listen to people every day, and can't turn it off.

The Forsaken is written from multiple points of view and has intersecting storylines. How do you keep the novel's pacing intact, and maintain linear focus?

Technically speaking, the easiest way is to have an outline. As I move ahead, I keep track of all the pathways of the story. The Forsaken is almost like two novels combined into one. It's like shuffling two decks of cards, and I have to make sure the shuffling is evenly spaced. I also make sure each story complements the other. At first, the stories seem far apart, but coalesce as the novel progresses. The connections are made through an outline -- a roadmap.

What's been the biggest surprise to you about writing over the years?

I'm working on book sixteen now, and each novel presents its own challenge. I'd have thought that working on the sixteenth novel would be easier. But every book is still tough. I would like to say years of experience have made the process easier, but it's just not true. I think if you're going to challenge yourself as a writer, you try to make each project better. You find new and interesting obstacles with each book. I find there's a sort of initial anxiety with each new book, but I have to keep going. When beginning a new novel, there's always a great deal of uncertainty, but wanting to get paid, trumps any anxiety I may feel.

Do you hang out with other writers and talk about writing?

Yes, we hang out but we probably talk about everything but writing. On a typical night, I'll go to a local pub and meet Jack Pendarvis, Lee Durkee, Tom Franklin, and Chris Offutt, other writers in Oxford, Mississippi. It's kind of a gang of writers and we have a beer or cocktail together. After all, we sit in rooms all day, trying to put words on a page. It's such a solitary profession that it's a pleasure to get out and meet other writers.

If you could have dinner with any five people, writers or figures from history -- living or dead -- who would they be?

Definitely, one would be Hemingway. Billy Wilder would be another. Burt Reynolds has had a fascinating life, is a very funny guy, and made some great action pictures. He used to hang around with guys like Orson Welles. I'll bet he has some great stories to tell. I'd also like to sit down with Dashiell Hammett. My last choice is an easy one: Raquel Welch.

What would you be talking about?

We'd be talking about Raquel Welch, of course. (Laughter).

Congratulations on writing The Forsaken, a multi-layered Southern novel that while considered a "crime" novel, is really quite a "literary" work as well.