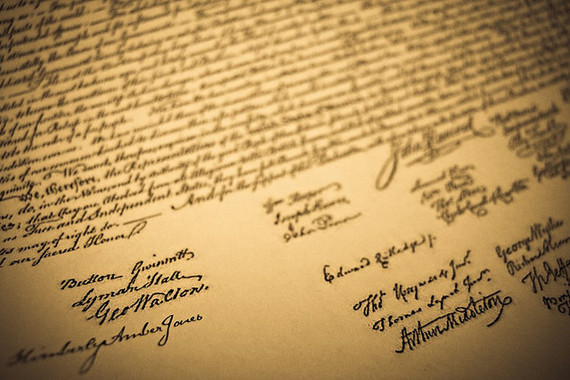 But one thing that's a little less understood is that most of them were true entrepreneurs, long before the word was even in use.

There are some inspiring tales of self-made men within their midst. So as we celebrate the 239th anniversary of the adoption of the Declaration of Independence on July 4, here's a breakdown of some of their stories.

The Lawyers and Doctors

Walk into just about any legislature now, and you'll see plenty of law degrees on the walls. The politicians of the earliest days of the United States were no different.

Honestly, there are too many lawyers among those who signed the Declaration of Independence to list them all, but they had to hustle for clients, argue and advise, and work hard to collect fees just like their modern-day counterparts. Among the most prominent was a future president, John Adams of Massachusetts.

My favorite among Goodrich's stories, however, is that of Maryland's Thomas Stone, who practiced law until he was able to "discharge the obligations under which he had laid himself for his education," and then go into farming. (In other words, he practiced law until he paid off his student loans and then found something he was more passionate about.)

Another big profession of the time -- medicine -- was also well represented. (I'm including doctors and lawyers together, because this was a time when law and medicine meant arranging for your education and running a business on your own.)

Among the doctors were Benjamin Rush of Pennsylvania and Matthew Thornton and Joshua Bartlett of New Hampshire. (Bartlett is better known today as the fictional forefather of Martin Sheen's character in the television show The West Wing.)

Oliver Wolcott of Connecticut almost joined the group. He studied to be a doctor as well, but never practiced, Goodrich wrote, as he'd already inherited a fortune and didn't need the money.

There were quite a few "gentlemen of good birth" who inherited significant fortunes. Some even expanded their fortunes and became entrepreneurs themselves.

John Hancock, who signed so boldly that his name became a synonym for a signature itself, took over his uncle's business and "secured profitable government contracts" during the French and Indian War. His fellow Massachusetts native, Sam Adams, however, "lost the entire capital which had been given him by his father," in his own business exploits.

Virginian Carter Braxton inherited "a considerable fortune, consisting chiefly of land and slaves," Goodrich wrote. Braxton used much of his fortune to help finance pro-Revolutionary causes, and eventually lost much of it. His fellow Virginian, Francis Lightfoot Lee, however, had done so little with his considerable inheritance, that the best Goodrich could say was that he'd devoted his early years "to reading, and to the enjoyment of his friends."

The most interesting stories come from the men who built their own fortunes.

Born in Ireland, George Taylor arrived in the New World "entirely destitute," according to Goodrich, and went to work as a manual laborer, starting with the job of feeding a coal furnace. Taylor was promoted to clerk, and when his boss died Taylor wound up with the man's widow. He took over the man's businesses as well and ultimately built "a considerable estate."

George Walton, the last of the Georgia delegation, was a carpenter's apprentice whose boss "not only kept him closely at labor during the day, but refused him the privilege of a candle, by which to read at night." Undeterred, Walton would scrounge wood so as to be able to read by the fire. He learned enough that he was eventually able to study as a lawyer.

Roger Sherman of Connecticut began as a shoemaker when his father's death left him responsible to provide for his family, and eventually became a successful merchant. Meantime, New York's Francis Lewis, a Welsch immigrant, became a trader throughout Europe, but unfortunately lost most of his fortune during the Revolution, Goodrich wrote, and spent his last days "in comparative poverty."

Another orphan, Robert Morris of Pennsylvania, apprenticed in a "counting house" and eventually went into business with a friend, Thomas Willing, in 1754. The two men worked together for 39 years.

Want to read more, make suggestions, or even be featured in a future column? Follow me on Facebook, or contact me and sign up for my weekly email. A version of this column appeared on Inc.com. Photo: flickr/owlpacino