Let's be perfectly honest: as much as Americans would like a tough nomination fight for the Democratic presidential primary like the Obama-Clinton wars of 2008, we aren't likely to get it. The summary of the horserace polls from RealClearPolitics puts Hillary Clinton, who officially announced her presidential candidacy last Sunday with a video and a tweet, 40-54 points above any other Democratic candidate. Iowa's political paper of record, the Des Moines Register, has Clinton 40 points in the lead in the state's Democratic caucuses, which is a number that she surely has in the back of her mind as she does the small-town, retail campaigning that Iowans expect during every election season.

The spread is very impressive, and its far better nationally than when Hillary Clinton first ran for president in 2007-2008. But it's only April 2015, and we are months away from the first primary debates and the first official poll closings. A lot can happen between now and the Democratic conventions in August or September 2016, and in U.S. politics, the most innocent slip of the tongue or the lack of an inner censure can have devastating consequences for a candidate's chances.

Republicans and potential Democratic challengers who haven't made a decision to enter the primary race were taking it as an assumption that Hillary Clinton would run (indeed, most Americans I've talked to assumed the same thing), so they're prepared for a full line of attack against the Clinton political machine. The former First Lady, Senator, and Secretary of State has a devoted list of loyalists ready to work hard for her throughout the next 18 months, but there's an equally strong determination on the other side to beat her down and trip her up.

Whether it's Mike Huckabee, Martin O'Malley, Marco Rubio, or Lincoln Chafee, here are four lines of attack that Hillary's political opponents will use to dwindle her 45-point lead.

1 - She's From the Past, and Americans Need Someone From the Future: Younger candidates like Marco Rubio, Rand Paul or Ted Cruz will hit Hillary Clinton on the age factor. The line of argument is simple, and potentially effective: Hillary has been at the center of the Washington establishment for over 30 years in various capacities. She's had her time in the spotlight longer than most, so it's time for her to retire and spend some quality time with her new granddaughter. 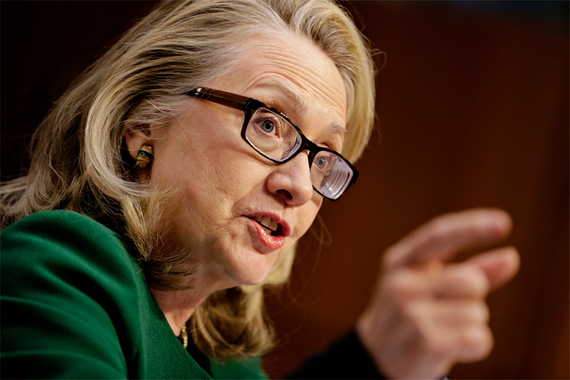 Tee Marco Rubio. "Just yesterday, a leader from yesterday began a campaign for President by promising to take us back to yesterday. But yesterday is over, and we are never going back. We Americans are proud of our history, but our country has always been about the future. Before us now is the opportunity to author the greatest chapter yet in the amazing story of America."

2 - Hillary Is Scandalous: Travelgate, emailgate, Monicagate, ClintonFoundationgate, Roselawfirmgate... when is enough, enough? What other public servant and politician, other than Hillary Clinton, has had so many scandals around her neck and so many chances at redemption? Shouldn't Americans expect something better from their Commander-in-Chief than a person with a shady political history filled with controversy? This is a popular line among Republicans of all political denominations, and Rand Paul has hit these campaign theme hard even before he announced his own campaign last week. Clinton's team needs to be fully prepared to answer the accusations with facts.

3 - Hillary Voted for the Iraq War: You may look at this and scoff that it's not a legitimate line of attack. Back in 2007 and 2008, when Americans despised George W. Bush, the Bush White House and the Iraq War in overwhelming numbers, Hillary Clinton's 2002 vote for war was an albatross that kept her on the defensive. Back then, you had a freshman senator named Barack Obama -- who didn't vote for the war and was publicly opposed to it -- bash Hillary numerous times as a senator who supported a preemptive war without evidence-based justification. It's no longer 2008: although several thousand U.S. troops are on Iraqi soil, they are no longer patrolling the streets and are confined to military bases.

"That was a moment," Chafee told CNN's Dana Bash, "where the premise for going to Iraq was so false that there were weapons of mass destruction, she didn't do her homework. We live with the ramifications. You may say that's 12 years ago -- that's a big motivator for me running. If you show a lack of judgment, lack of doing homework then, what can we expect in the future."

Who knows if this will work? But it's another assault that Clinton's campaign will have to be ready for.

4 - She's a Steward of Barack Obama's Awful Foreign Policy: Of all the ads and attacks that have been levied against Hillary Clinton to date, this one is perhaps the most substantive. The National Review, prospective GOP candidates like Lindsey Graham, Jeb Bush and Scott Walker, and current GOP presidential hopefuls Ted Cruz, Rand Paul and Marco Rubio have all used Obama's dismal foreign policy approval ratings to their advantage.

Que the NRO's latest editorial: "Clinton was complicit in President Obama's failed foreign policy from the beginning, and there is little to suggest that she rejects its erroneous premises. What we can expect from a Clinton administration is a continuation of Obama's policies, with even worse ethics."

In negative campaigning, facts are often obscured, successes are diminished in significance, failures are amplified, and perspective is sometimes taken as reality. It will be no different against Hillary Clinton in 2015 and 2016.