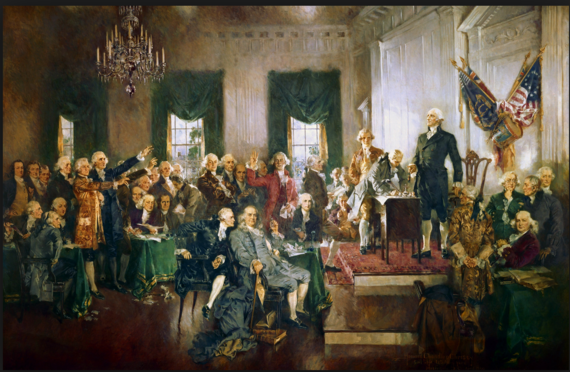 I've got the hamburgers and the sparklers. Washed my red white and blue T shirt. Everybody's got their assignments for the barbecue. And I find myself wondering--just what are we celebrating here?

Do you get a lump in your throat when the white-haired vets carry the flag by? Do you dream of home when you're in another country, missing American voices, jokes, tastes and sights and smells? I do.

But people all over the world have equally strong feelings for their home countries. Nigerians in a New York winter yearn for the warmth and light of Lagos. Russians in Osaka dream of the birch trees around St. Petersburg. The French, wherever they are, are certain that France is in every way better. The love of home must be almost universal, and patriotism based on these emotions is the same the world over.

But there's something beyond the emotional love of this land and its people that accounts for the pride, respect, and awe that I feel on the Fourth. Because the Fourth is special.

Consider that no shots were fired, no swords drawn on the fourth of July, 1776. What we celebrate is a quiet event, in a hot, closed room, in the colonial city of Philadelphia, when delegates from the British colonies in America signed a document that told their British lord and masters to piss off.

You had to read their Declaration in school--"When in the course of human events"--remember? Thomas Jefferson wrote the draft; the delegates argued over the words for three days. They took out Jefferson's blast at the king's slave trade, but what they left in was more than enough to get them all hanged. And on the fourth day they put their names on it.

These cheeky colonists held that certain revolutionary ideas were, if you please, "self-evident" truths. In a time when kings still thought they ruled by divine right, these colonists said it was obvious that all men were created equal, that they were born with the rights to life, liberty, and the pursuit of happiness and nobody, including King George, could mess with those rights. Oh no.

Government had to be from the people up, not from a king down--governments' power came from the "consent of the governed" and if the governed were as fed up as the colonists were with George, they had the right to dump him and his government and start one that suited them better. They presented a long list of grievances to support their determination not to take it anymore and declared the United States of America free and independent states who would now govern themselves and do a proper job of it, thank-you-very-much.

They knew the king wouldn't sit still for this; they knew he'd move full-power against them. The closing words of the document bound them together in the trouble they knew would be coming down on them: "And for the support of this declaration, we mutually pledge to each other our lives, our fortunes, and our sacred honor."

That's the Fourth. We're celebrating the courage of those delegates, and the principles they were sticking their necks out for, as they walked to the table, dipped the pen in the inkwell, and put their names, clear and bold, on that paper.

So when the flags wave and the fireworks light the sky, it's not just about loving purple mountains' majesty and amber waves of grain, and it's not just about American moms and apple pie--it's about the vision and courage of the heroes who launched an astonishing, revolutionary, democracy.