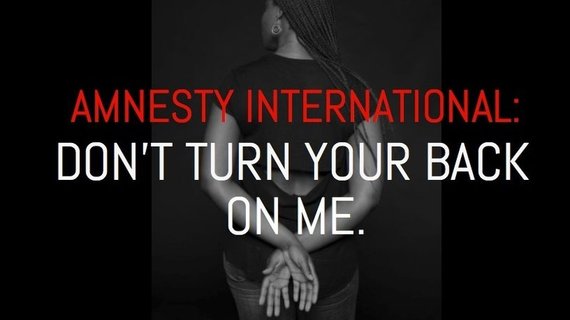 You may write me down in history With your bitter, twisted lies, You may tread me in the very dirt But still, like dust, I'll rise... Maya Angelou

What would happen if every country decriminalized prostitution? Not just the few that have already disastrously done so, but what if every government legitimized pimps and brothel owners and failed to hold men accountable for purchasing human beings for sex? Would the United Nations and its member states launch a #2050 Agenda for Investing in the Sex Trade as a Solution and Sustainable Development for Women and Girls, Especially the Most Indigent?

What marketing slogans would ensue? Might public agencies launch poverty alleviation campaigns? "First Nations, Indigenous, Aboriginal, African-Americans and Global South Populations: Are you Poor, Young, Incested, Transgendered, Homeless? With our help, the Sex Trade will provide you with shelter, food, free condoms and the opportunity to contribute to your (or a foreign) country's Gross National Product. No experience or education required."

These are not teasers for Margaret Atwood's next novel, but a concept set forth by Amnesty International, one of the most prominent and respected human rights organization in the world.

After a contentious debate at its International Council Meeting in Dublin this August, Amnesty's delegates passed a resolution for full decriminalization of the sex trade, including pimps, brothel owners and buyers of sex, as a means to protect prostituted individuals. Amnesty's International Board is about to review, and likely to adopt, a policy framework that would render the sex trade an acceptable and desirable employer.

Although a number of Amnesty country sections, including those of France, Israel and Sweden, opposed the decision, its stubborn march toward urging governments to embrace what effectively is legalization of prostitution seems unstoppable. With inexplicable disdain, Amnesty's leadership ignored the thousands of voices from the global grassroots women's movement, survivors of prostitution, scholars and researchers, lesbian and gay leaders, and others, including a former US president and the heirs of Martin Luther King, Jr.

Instead, Amnesty seems swayed more by the incessant chants of a formidable pro-pimping culture and what the journalist Meghan Murphy calls "Playboy Feminism," than abiding by the Universal Declaration of Human Rights. Amnesty welcomed convicted pimps to shape the policy and others linked to the sex trade to defend them on the media circuit. Women have the unequivocal right to make decisions about their health, body, sexuality and reproductive life. Men, on the other hand, do not have the fundamental right to gain access to that body in the sex trade or in any other sphere, despite Amnesty's premise to the contrary. Amnesty is refusing to admit that the prostituted suffer at the hands of buyers regardless of the legal environment, willfully ignoring "johns'" own accounts of their predilection for dehumanization and research showing their propensity for sexual violence. As Native Canadian survivor Bridget Perrier states: "It is not the laws that are killing our women; it is the men."

Examples of gender equality frameworks that address prostitution are at Amnesty's fingertips in countries like Sweden and Norway, but it prefers to dismiss them in favor of the brothels-are-businesses models, with disastrous living proof of these in New Zealand, the Netherlands and Germany.

"We need to eroticize equality. Prostitution is about buying a body, not mutual pleasure and free choice," says Gloria Steinem, whose pleas to Amnesty were also left unanswered. "The most successful way to tackle this dangerous inequality is neither criminalization or legalization, but the 'Third Way': decriminalize the prostituted while offering meaningful exit strategies and hold the buyers accountable."

The lack of understanding of the indivisibility of the human rights of women and girls is not new to Amnesty. From refusing to speak out in the nineties against harmful traditional practices, such as female genital mutilation, to dragging its feet to include reproductive rights in its mandate, Amnesty preferred siding with countless governments on characterizing such violations as mandated by culture or religion.

Think of this: over three million women and girls are sold to men on a daily basis in mega-brothels in India. Under Amnesty's plan, that number would exponentially increase with legalized demand and cultural acceptance of prostitution as a viable livelihood for poor, low caste and invisible girls and young women. A vote to endorse the global sex trade would wipe out any progress to advance women's rights that Amnesty might have made in the past years.

The Afrikaans term apartheid means "apart and aside" and evokes one of the most brutal regimes in modern history. By encouraging governments to enshrine the sex trade as just another potential employer, Amnesty is promoting gender apartheid, the segregation of women between those who deserve access to economic and educational opportunities and those who are condemned to prostitution. Make no mistake: as long as women are for sale, no woman will be viewed as equal in corporate boardrooms, in the halls of legislature, or in the home. The forces supporting Amnesty's defective vision for women and girls are mighty and the narrative is familiar. Many of us who have signed this Global Declaration are daughters of lost tribes, who at our mothers' breasts heard whispered tales of resilience and survival in the midst of invaders, genocide and forgotten languages. The rhythms of colonization do not change; they run through women's bodies whose access is acquired by any means necessary, including violence, control and money.

The powers may have spoken but justice has not. To every Goliath there is a David; to every Dred Scott there is a movement awakening. Battles can be lost, but the rebel spirits survive in the name of our foremothers and their great-granddaughters yet to be born. It is not too late for Amnesty International. A visionary human rights organization crafts its mission on what we'd like the world to be, not accommodate the untold suffering that exists. But until Amnesty rights this wrong, its legitimacy is tarnished; its soul, lost; its candle, extinguished.