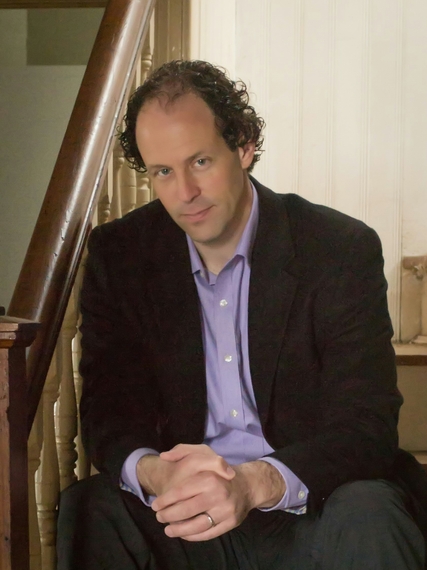 Brad Parks is the only author to have won crime fiction's Shamus, Nero, and Lefty Awards. As in his five previous novels, his protagonist, Carter Ross, is an investigative reporter for Newark's Eagle-Examiner.

In The Fraud, a rash of carjackings is terrorizing Newark. When one theft results in the murder of a banking executive, Ross begins investigating the case. He soon learns that a Nigerian immigrant was also killed in another carjacking only days apart from the executive's murder. Carter discovers the two victims knew each other, and finds himself on the trail of a deadly band of car thieves. Nothing is really as it seems as the stakes rise, threatening Carter's life and that of his unborn child.

You were a reporter for The Washington Post and the Newark Star-Ledger. Are the Carter Ross mysteries spinoffs from actual events you investigated as a reporter?
I rip off shamelessly from real life. One year in the newsroom gives you enough material for twenty novels. I spent a dozen years in various newsrooms and it's provided me with a wealth of stories.

The Fraud begins with an intriguing sentence: "It's a hypothetical question every parent considers at some point: Would you give your life for your kid?" Will you talk about the importance of a novel's opening lines?
I think the patience of readers everywhere has changed in the last thirty years. Once upon a time, a novel had twenty pages to hook someone. I don't think anyone gives a book that much time anymore. If you can snare a reader on the first page, that's great. If you can do it with the first sentence, it's even better.

The Fraud paints a frightening picture of the dangers of carjacking in Newark, New Jersey. Describe what the novel calls "the Newark cruise" in relation to carjacking?
The "Newark cruise" is an example of street-smart civil disobedience as practiced in Newark, New Jersey. Coming to a full-stop at a red light late at night is an act of folly. If you do, you make yourself a target for someone to walk up to your car wanting to sell you drugs. There's a more dangerous risk -- carjacking. When you see a red light off in the distance, you slow down well ahead of time, giving yourself leeway to slowly cruise up to it. You inch up to the red light. If you reach the intersection while the light is still red, you look around, and if nothing's coming, you gun it, and go right through the intersection.

That being said, I don't want to portray Newark as a crime-infested city. When I worked for the Star-Ledger, I knew two Newarks: there was the Newark during the day and the one at night. They were virtually different cities. There are many wonderful people in Newark working very hard to make it a better place to live.

Carter Ross says some humorous things in The Fraud. What role can humor play in a mystery or thriller?
As a writer, I try to reflect the world around me. The journalism world, and particularly the newsroom, is a place where people always make wisecracks. Journalism isn't unique in this regard: hang around with cops, ER people, nurses, social workers or any other profession where people see the more difficult aspects of life, and you'll find gallows humor. It helps us get through things we might not otherwise handle as easily. I want Carter Ross's world to reflect that reality about journalism. While some people feel you can't have suspense and humor together in a novel, I think humor can be a bit of a tension-reliever before the next suspenseful event occurs. Humor can give a thriller peaks and valleys. But I don't inject humor into my books in a calculated way. The world I lived in -- journalism -- was filled with humor.

How and why did you decide to become a full-time novelist?
It's sad, but also lucky for me. The newspaper industry is dying. It wasn't going to be there for me into the future. My wife and I were starting a family, and it was very clear I wouldn't be able to ride the dinosaur -- the newspaper industry -- to the finish line. The positive thing is this: I would never have done something as risky as quitting my job to write novels. I'm just not wired that way. Facing the impending demise of the papers, I ended up taking a gamble I might not have otherwise attempted. It forced me to follow a dream.

You've said your writing process involves "pantsing." Explain what this means to our readers.
"Pantsing" means you have no idea what the ending is when you begin the novel. It means flying by the seat of your pants. It can even mean I have no idea what the next sentence will be. It's like jazz improvisation at the computer keyboard. It's both terrifying and wonderful fun. I literally have no idea what's going to happen each morning when I sit down to write. There are times when I'll come home to my wife and say, 'Honey, you'll never guess what Carter did today.' (Laughter) It's as much a surprise to me as it is to anyone. If it's a delightful surprise to me, it's going be that way for the reader. I don't plot out or outline my novels in advance.

But you do have some concept of the story you're about to tell.
As a newspaper guy, I always start off with questions: What issue do I want to write about? What is my topic? Then I ask myself, what crime might derive from that topic? And who might have cause to commit that crime? Who gains from it? I usually begin writing before I have all those questions answered. Much of it gets discovered along the way, during the writing process. Yes, at times, I write towards a destination, but I try to be flexible enough to accommodate the element of surprise.

I once tried to outline a book. I wrote an eighteen-thousand word outline. It was choreographed to the last nanosecond. I woke up every morning knowing exactly the scene I would write. It was like painting by numbers. There was no joy in the writing. I ended up throwing out that novel.

What has surprised you about the writing life?
Simply put, what surprises me is how much about the writing life I still don't understand. The creative process remains a mystery to me, and perhaps to everyone else. The number one question we're asked at book-signings is 'Where do you get your ideas?' I still don't have the foggiest clue where these things come from. I do a lot of running, but the real benefit of running is that's when ideas come to me. It's a particularly fertile time for me. Creativity is still a mystery to me.

What's the most important lesson you've learned about writing?
My buddy Reed Farrell Coleman says, 'Fall in love with writing, not with what you've written.' It's really about finding a process for your art, and sticking with it. You have so little control over the results of your efforts. You send a book out into the world and have no control over what happens to it. But you can control what you put into that effort -- the very best in yourself. I try making sure I'm giving the best of what I have to offer to the reader. I don't drink when I'm in the middle of a draft; I get rest; I write early in the mornings, and know how the process works best for me.

What, if anything, keeps you awake at night?
All the other stuff that's not the process of actually writing. (Laughter). I used to worry I'd run out of words; that one day I'd wake up, and the words wouldn't be there. Sometimes a particular turn of phrase just materializes in my head, and I wonder if someday that will stop. What if that magical creativity vanishes? Because, I have to be honest: Besides writing, I have no other marketable skills.

Congratulations on writing The Fraud, a witty and gritty novel about which Library Journal said, 'Parks, a gifted storyteller (with shades of Mark Twain, or maybe Dave Barry), shows his mastery of the comic absurd behind serious journalism.'

Mark Rubinstein,
Author of The Lovers' Tango and Return to Sandara