Socialist party candidate François Hollande defeated incumbent Nicolas Sarkozy yesterday to become the new French president -- the first time France has had a Socialist in its highest office since François Mitterrand ended his second term in 1995. During his campaign, Hollande emphasized the importance of culture, suggesting several initiatives on topics as varied as arts education and illegal downloads. Here's a look at what is likely to change in the cultural landscape -- and what will likely stay the same -- over the next five years. 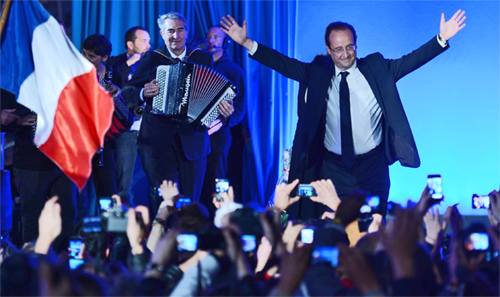 Citing the ambitious cultural projects of previous presidents -- such as Georges Pompidou's creation of the Pompidou Center and Valéry Giscard d'Estaing's establishment of the Musée d'Orsay -- Hollande wants to create a national plan for arts education. His spokesperson Aurélie Filippetti told L'Humanité last month that the idea is to establish "coherent curricula which, from kindergarten through college, allow new generations to develop their own sensibility, in collaboration with outside institutions." In a campaign speech, Hollande stated his intention to do this by establishing an interministerial office that will have its own budget and report to the prime minister. Education is notoriously difficult to tamper with in France, but the president can employ a great deal of discretionary authority. Especially if these proposals enjoy student support, this could be the signature cultural contribution of Hollande's presidency.

Hollande also wants to repeal the controversial Hadopi law on digital downloads. The law, which was passed in the National Assembly three years ago with only one Socialist vote in its favor, criminalizes illegal downloads of cultural content, and Hollande accused it of creating "a gap between creators and their public." Le Monde reports that when the French Dramatic Authors and Composers Society, which represents playwrights, screenwriters, and filmmakers, expressed concern and asked the candidate to clarify his policy, Hollande confirmed his belief in "the absolute necessity to defend authors' rights," adding that he wants to "strengthen the legal offerings online" by designating funds to aid in the development of legal downloading platforms. According to his Web site, Hollande foresees replacing Hadopi with a new law that would "guarantee the financing of creativity as well as the widest broadcasting of creative works to all publics" -- which sounds easier said than done.

In terms of general government support for the arts, it's not clear that Hollande will bring about any major changes. He talked about the culture ministry in a speech at the International Drama Biennial in Nantes in January, emphasizing that public financing of culture is part of French history and promising that the culture budget would be "completely enshrined." While many European countries have seen cutbacks in cultural funding, under Sarkozy France actually saw a slight increase (.9 percent) in its culture budget for 2012, bringing it to a total of €7.4 billion ($9.7 billion). It's noticeable, then, that, with the European debt crisis still unresolved, Hollande did not promise to increase cultural funding, but to "enshrine" it.

Last Thursday, 362 academics, writers, and artists, including Christian Boltanski, Annette Messager, and Jean-Jacques Sempé, posted a letter in support of Hollande on the blog of the magazine Les Inrockuptibles. But, more than anything, it was a letter against Sarkozy. "During five years in power, the right has openly scorned knowledge and culture to the detriment of the general interest," they wrote, accusing Sarkozy of "drastic cutbacks in budgets, the deregulation of public policies, and the abandonment of the liberating ambition of knowledge" and declaring the culture ministry to be "only the shadow of its former self." During his campaign, Hollande invoked the notions of inclusion and equality that critics of Sarkozy have found to be sorely lacking during his term. He gave himself the goal of making culture more accessible to all, "irrigating all the forgotten territories, the abandoned parts of our regions, the neglected neighborhoods of our big cities." Now it only remains to be seen when this softer tone will be accompanied by concrete actions.

Why Stuart Ringholt Conducted Nude Tours of a Sydney Museum

"For Found Objects They Were Easy to Find": Johnny Swing on Making High-Design Furniture Out of Coins

Courtney Love Wields Pen and Paintbrush For Her First-Ever Art Exhibition, "And She's Not Even Pretty"