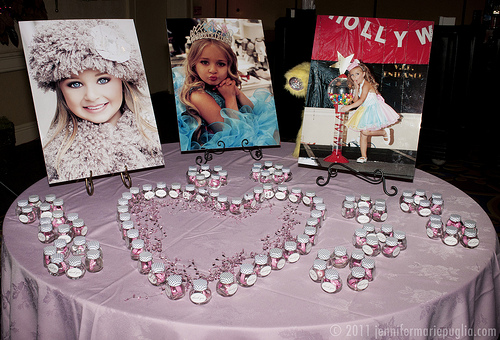 One pageant owner, Le Parmentier, has already said that if the law is passed, he might move his pageant to Belgium but right near the French border, to accommodate French contestants who want to compete without having to worry about legal consequences. I guess jail time is worth it to some of these crazy pageant parents just to be able to say their kid is the prettiest. We've all seen those crazy pageant moms on Toddlers and Tiaras, there's not much they won't do to pit their child against someone else's. It's like dog fights with pretty little girls made up like clowns.

I've never been a fan of beauty pageants, especially for children. I understand competing in a teen beauty pageant for scholarships but there has to be more to it than just the way you look. I'd prefer my girls be in an academic bowl any day. What exactly does pageants teach our little girls?

There is nothing anyone can say to convince me that will reason dressing a 4-year-old up in spray tans, partial dental pieces and more make-up than Tammy Faye Baker. Making a 3-year-old sit still while you pluck her eyebrows and urge her to wear breast inserts while she sings Happy Birthday, Mr. President as Marilyn Monroe is disgusting. Parading your child around like a show pony in a $2500+ dress , sleep deprived and high on Mountain Dew and Pixie Stix is criminal. Overweight moms yelling in disappointment at babies because they themselves suck at life should warrant DCFS intervening! According to France 24:

The amendment is part of a broader bill on women's rights, which will now proceed to the National Assembly, French Parliament's lower house, for debate and another vote.

The senators who voted in favour of the measure argue that it will protect children from being prematurely "sexualised" through the use of heavy make-up and often-provocative attire.

The amendment was prompted by a a parliamentary report entitled "Against Hyper-Sexualisation: A New Fight For Equality", which, in addition to calling for an end to the pageants, encouraged a ban on adult-style clothing for children, including padded bras and high-heeled shoes.

"Let us not make our girls believe from a very young age that their worth is based only on their appearance," the author of the report, former sports minister and current senator Chantal Jouanno, said in an interview with free French daily "20 Minutes" last year.

The topic has become a hot button topic since December of 2010, when French Vogue published a photo spread featuring images of a 10-year-old French girl, Thylane Loubry Blondeau, decked out in a tight dress, jewellery, high heels and make-up. Not surprising the photos sparked international outrage; not unlike the Jours après lune lingerie campaign for little girls. The French have beautiful women and little girls, but can't we just let them grow up first.

If the bill is signed into law, as expected, pageants like the annual "Mini-Miss" contest in Paris will no longer take place. I wish they'd do the same thing here in the United States. Maybe there should be a law against parents living vicariously through their children?

Needless to say the pageant queens of the world and their crazy mothers won't go down without a fight, expect lots of Tammy Faye Baker make-up, tulle, 14-foot trophies and hair to match coming at you in protest. Me, I hope beauty pageants go the way of the dinosaur. Extinct.

Moms, stop sexualizing your little girls and making it easier for the pedophiles. No toddler needs to be on stage wearing a skimpy two-piece bikini, pouting her lips and shaking her tush like a stripper, especially not one still in diapers. Stop encouraging her. Stop teaching her that to be of value she has to be beautiful and little kid beautiful is not good enough, she has to look like a grown woman.

We wonder why teens are getting pregnant and having sex at younger ages, maybe it's because they are being taught to be sexy when they are 2-years-old by their own parents. Little girls are being taken, raped and murdered at an alarming rate, don't give pedophiles an invitation to oogle your little girl. Protect your daughters.

What do you think of little girls in beauty pageants? Is it harmless fun or early sexualization of our little girls?