On Sunday, I sat at the front of the room with my phone in my hand, keeping time, as I looked out at a room full of women laughing, talking and leaning in toward each other.

Only an hour earlier, they had arrived to my Friendship Accelerator as strangers. Here they were, looking a lot like good friends. I knew that given a few more hours, I'd see women hugging each other goodbye with words like "See you next week!" excitedly hanging in the air.

There are actually few things more gratifying than facilitating Friendship Accelerators. Undoubtedly, speaking and writing are two of my favorite things, since I love communicating and teaching, but the Accelerators give me a chance to go beyond inspiring and instructing an audience to actually helping cultivate the very connection people crave. They're magical for me. All the motivational speaking in the world can't deliver friendships to people... but the Accelerators can; and for those results, I love them.

I, in fact, have joked that I feel a bit like a scientist in a lab inventing friendships. Like any passionate scientist who might pour a little of this concoction, a dash of that, and a sprinkle of something else to create something greater than all the individual elements, I have learned that the very high possibility of meaningful friendships is something I can create. Over the years, I am perfecting the recipe, but the fact that the results are more predictable than ever has never dampened my glee when I watch it work, again and again.

Is there a Formula to Love?

Perhaps because I've been vocal over the years that I believe there is more of a formula to friendship than most of us want to believe, several women sent me the recent article in the New York Times titled, "To Fall in Love With Anyone, Do This" and said variations of "This reminds me of what you do with friendship!"

In the article, Mandy Len Catron shared the story of falling in love with someone through answering the same 36 questions that researchers had used in a study to analyze what helped people feel close to each other.

In that study, they developed a list of questions that were designed to help two people self-disclose in increasing intensity and included questions that helped the subjects talk about their relationship and each other. The connection to each other was big enough for the researchers to conclude: "One key pattern associated with the development of a close relationship among peers is sustained, escalating, reciprocal, personalistic self-disclosure."

Notice that the basis of the connection is self-disclosure and sharing, but that it also has to be consistent, mutual, and incremental.

Just as interesting as what did work in bonding people in a lab is what didn't work that they also tested: 1) leaving two people to engage in small talk for 45 minutes didn't work, 2) being matched with people who agreed with you on important views didn't result in an increased connection, 3) being told the goal was to feel close didn't make a difference in helping the pair reach the goal and 4) being led to believe that mutual liking was expected based on them being a good match didn't help it pan out.

Think about how much of our dating includes those four things: hoping it will work, believing we're a match, both having the goal of finding someone and spending time on a date talking... but none of those factors lead to intimacy as much as intentional and personal self-disclosure that escalated incrementally.

Is there a Formula to Friendship?

Similarly, while their research was more focused on romantic intimacy, it confirms what I have long known to be true in friendship, as well: There are actions we can take to foster a bond.

In other words, it's not just "chance" that will determine whether we'll feel a connection, nor is it only if the other person proves to have the "right" qualities we think we want in someone. Bonding has far more to do with the verbs we engage in with someone than the adjectives they possess.

It's why the women who join GirlFriendCircles.com attend ConnectingCircles, small groups of three to six women who gather at a local cafe and pick questions off a list of Sharing Questions to ask and answer. We have found the success rates of women feeling connected to others increases when they engage in sharing questions about themselves rather than just let the conversation drift from movies to men to jobs.

And it's why I developed the Frientimacy Triangle, which teaches that all relationships start at the base of the triangle and bond when they increase both their time together and the self-revealing they're willing to do. (Read another post or buy my book for more explanation.) 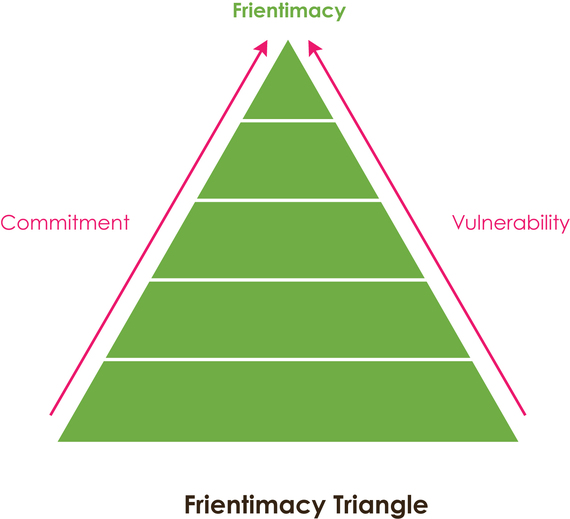 What's so encouraging is that these actions are within your control! You can 1) initiate time together with people you want to bond with and 2) you can ask questions and share about yourself in a way that helps the two of you bond.

It has far less to do with you both needing to be moms with kids the same ages, both needing to be retired, or both single 30-somethings -- you can build a close connection that is meaningful with far more people than you believe you can. I've seen it time and time again.

And that's why the Friendship Accelerators work: They commit to a whole day together that I facilitate to help create intentional sharing and then they commit to four weekly get-togethers where they will increase their time together and continue to share their lives.

Last summer, I was invited to attend the one-year anniversary of a Friendship Accelerator group who was still getting together weekly 52 weeks after they met. I went to a birthday party last month where three women there had all met at one of my Accelerators a couple of years back. I regularly see Facebook photos of another group who seemingly gets together all the time for fun stuff all over the city.

Last week, I received an email from a woman who had been in one of my Friendship Accelerators a couple of years ago who said, "Two of the friends I met at our Accelerator 3 years ago are still very dear to me and an important part of my life. Even though one moved farther away, we are still in regular contact and get together often. In fact, I had dinner last night with one of those friends and the 3 of us are going to the theater to celebrate the other one's birthday next week. Thank you!"

The Two Necessary Ingredients in Bonding

Indeed, whether it's romance or friendship- they both are built upon helping bond people- we all too often expect more from the things that don't work and are too busy or too nervous to try the things that do.

If you want meaningful connections:

Time together + Intentional Self-Revealing = Feeling Close to Others.

PS: If you want me to come to your city to lead a Friendship Accelerator you can add your email and zip code to our list to be notified when we schedule one in your area!