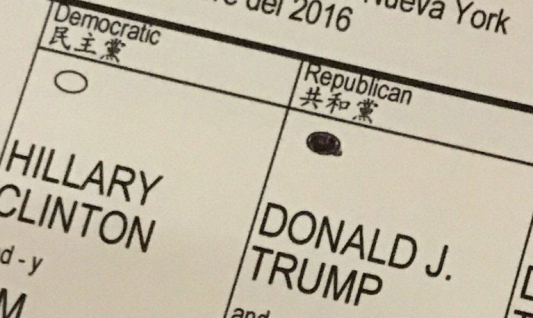 An estimated 58% of white voters in the 2016 election cast a ballot for Donald Trump. And since the stunning election results of November 8, there's been a growing narrative that seeks to explain why they flocked to him in droves. It goes like this: Most who voted Trump did so not because of his xenophobia, misogyny, and anti-intellectualism, but because he was the only candidate capable of blowing up the system. They were sick of years' worth of congressional obstruction, income inequality, and lack of representation by their elected officials. They felt oppressed, angry, and disgruntled, betrayed by leadership that systematically ignored their needs. Trump was the one and only candidate capable of hitting the reset button.

Framed in this manner, their decision to support the Manhattan billionaire seems far less offensive and far more justifiable. It's also complete horseshit. Here's why.

Those who love, loathe, or tolerate Hillary Clinton as a candidate can agree on one thing: She's been part of the Washington establishment for decades. For some, this means steadiness and experience; to work the system, you need to know it inside and out. For others, this means status quo; she's someone who colors inside the lines and favors incremental change on numerous issues. It's hard to argue with anyone asserting Clinton is the antithesis of an Extreme Makeover: Washington Edition candidate. Therefore, as the argument goes, the default disruption vote ends up with Trump.

This is a 'binary choice' assertion, and it buckles hard under scrutiny. Clinton was by no means the only non-Trump option available to dissatisfied voters. Those looking to blow up the system had a perfectly viable candidate of change, and his name was Bernie Sanders.

As far as political counterprogramming goes, Sanders was at the very least on par with his fellow New Yorker. Like Trump, he was new to his adoptive party, and didn't represent government or special interests. Like Trump, he wanted to disassemble North American and global trade deals to bring jobs back to the American working class. Like Trump, he was angry, rough around the edges, and spoke his mind, putting Republicans and Dems alike on notice with his populist message. And like Trump, he was tired of the beltway gridlock.

Unlike Trump, Sanders ran a respectful and professional campaign, one that steered clear of divisive rhetoric and cultural marginalization. Despite his intellect and decades of experience, he was the furthest thing from a suited-up, pre-packaged politician. Whether one agreed with his policies or not, it's well established Sanders rode a forceful wave of grassroots support, pivoting from unknown entity to viable presidential contender within weeks. He knocked out two of his three primary opponents, and gave Clinton one of the biggest challenges of her career.

So why didn't Sanders clinch his party's ticket? Sure, there was the well-publicized collusion within the Democratic National Committee that threatened to weaken his chances. But the DNC was never organized or powerful enough to single-handedly make Clinton their party candidate, much less toss her the keys to the White House. (As former chief Obama speechwriter Jon Favreau recently mused, "I don't think the DNC has the power to rig a turkey sandwich.") The plain and simple reason Sanders didn't clinch the ticket: Trump supporters.

It's easy to forget the Democratic and Republican primaries didn't take place in a bubble. They were concurrently held on the national stage over several grueling months. Which meant any voter, Democrat, Republican, or otherwise, could opt for Sanders, the candidate of disruption who was given the best odds of becoming our 45th President.

Would there be obstacles for Republican and independents considering a vote for Sanders? Not particularly. On the blue side, numerous states held closed primaries and caucuses, where only party members could participate. And let the record show that America's millions of 'severely disenfranchised' white voters weren't quite disenfranchised enough to face the slight clerical nuisance of registering as Democrats to get Sanders elected. A bewildering turn of events, as such a task would seem exponentially less inconvenient than four more years of a status quo presidency.

With this impenetrable wall of registration-averse voters, it seems evident Clinton would be guaranteed a win and move on to the general election. But not so fast. Because the following states held open Democratic caucuses and primaries, where any legal-aged citizen could vote regardless of party affiliation or lack thereof: Washington, Montana, North Dakota, Minnesota, Utah, Texas, Missouri, Arkansas, Wisconsin, Michigan, Indiana, Illinois, Arkansas, Tennessee, Mississippi, Alabama, Georgia, South Carolina, Virginia, Vermont.

Notice a pattern? I did. Most of these were either swing states or moderate-to-deeply red blow-up-the-system states. To boot, an additional ten states held semi-closed contests, where independent and undeclared voters could freely cast their ballots.

I've crunched the numbers several ways, and the results are always the same: If even a modest number of Trump primary voters in these states opted for Sanders instead, he'd have defeated Clinton, heavily-weighted superdelegates be damned. And yet they willfully resisted, many knowing full well that doing so ran against their self-interests. They could align with Sanders, who was strongly favored to defeat any Republican candidate in the general election, or they could align with Trump, despite nearly all polls at the time asserting he'd be trounced by anyone who opposed him. They made their choice.

And in the wake of that choice, it's time to aggressively rebuke any narrative suggesting white voters elected an inexperienced, pathological lying, xenophobic sexual predator because he was the only candidate who could, to adopt the grating term one last time, blow up the system. This is a fallacy. Specifically, one that creates a false equivalence between government resentment and systemic bigotry. White voters--and they span myriad social and financial metrics--picked Trump not in spite of his hateful agenda and identity politics, but because of them.

Most aren't sugarcoating their decision to do so. Which means the rest of us have a responsibility not to sugarcoat it either. Contempt for intolerance shouldn't be a trait exclusive to the so-called liberal elite; it's a bare-boned requirement for being a decent human being. So at the very least, let's begin by doing away with apologist, misappropriated buzzwords like 'disenfranchised' and 'economic anxiety.' It may be hard to swallow, but sometimes people root for the bad guy simply because they like what the bad guy is all about.