The funniest man in America is someone you've probably never heard of. His name is Brent Douglas, and his comic persona is a rustic, angry fellow named Roy D. Mercer. For 30 years and until very recently, Douglas and his late partner Phil Stone were the morning DJ's at KMOD-FM in Tulsa, Oklahoma. Posing as Mercer, Douglas called people at work and complained about some bizarre problem he claimed they'd caused. He then demanded payment or promised "an all-day country ass-whuppin'."

It sounds like a typical prank call played by shock jocks across the country, but Douglas raised this to a level of comedic art, and he did what few if any of his colleagues ever do: he didn't hurt or humiliate anyone. After getting his patsy riled up and willing to take him on in a fight, Douglas would let the poor guy or gal in on the joke. Everyone would have a good laugh, and no one was worse for the wear. In other words, Douglas used a fundamental ethical principle as the basis of his humor: do no harm.

Some argue that pain is the essence of comedy -- someone else's pain, that is. For example, in the 2000-Year-Old Man, Mel Brooks states, "Tragedy is when I cut my finger. Comedy is when you fall into an open sewer and die." But there is a morally relevant difference between Moe dragging a saw across Curly's head in a Three Stooges short and the ambush style of humor that passes for entertainment on Morning Zoo programs today. The difference is that we know Curly isn't really suffering, but the victims of many prank phone calls do experience real pain, and it's hard to muster a good-natured laugh at the expense of another person's humiliation. (A particularly nasty example of this is a stunt pulled by two St. Louis radio "personalities" who had a fellow break up with his girlfriend on the air and then took intense pleasure as the woman was shamed into tearful misery.) With the Roy D. Mercer character, Douglas took the high road, and his comedy was the better for it.

I came across Mercer by accident. In 2005, I was listening to a Larry the Cable Guy album on the (legal) version of Napster and saw a sidebar prompting me to try another example of what the service referred to as "country humor." From the first track I was hooked and quickly worked my way through Mercer's entire recorded collection. Much to my then-fiancée's chagrin, I played each phone call over and over the way one does with one's favorite songs. (I couldn't have alienated my fiancée too much, because she married me anyway.) As I committed the skits to memory, I thought about how cool it would be to meet the comic genius behind all of this and talk about the ethical intelligence of his work. That meeting finally happened last year; you can listen to the interview here. 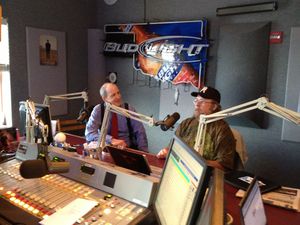 Brent Douglas (right) and me

Several hours after my on-air conversation with Douglas and Stone, the team announced their retirement and gave no reason why they were leaving their post after three decades. The announcement was a top local news story, and two months after the duo left the air, Phil Stone died of a heart attack. I feel both incredibly privileged and deeply saddened that his last on-air interview was with me.

But there is a happy postscript of sorts. This week, Capitol Nashville/EMI is releasing a new Mercer album, Red, White and Bruised, available on Spotify, Amazon, or your favorite music retailer. Treat yourself to a few hearty, good-natured belly laughs and tell your friends, too. Don't make me get Mercer to open up a 55-gallon drum of whup-ass on you.

Listen to excerpts of Mercer's calls by clicking on the telephone in his double-wide trailer or check out the compilation album, Greatest Fits.

Watch excerpts from my keynote speech about ethical intelligence here.