What's the most popular word in the news the past couple of days?

From The New York Times to Fox News, everyone's talking about President Obama's interview on ABC in which he publicly declared his support for gay marriage, deeming his new stance the product of a long "evolution" of his personal beliefs on the matter. This, of course, comes a few days after Vice President Biden publicly affirmed his own wholehearted support of gay marriage in another interview, forcing Obama's hand (Biden, says Obama, "got out a little bit over his skis," though the president insists he was going to come forward with his newfound perspective at some point before the Democratic Convention this summer). But no matter how the politics and timing of this formal announcement came about, hearing a revelation like this from POTUS's mouth is, as Biden would say, "a big f***ing deal."

Responses, naturally, have been all over the culture-war battle map. Some on the left, like Slate's editor in chief David Plotz, doubt that Obama's views on this issue have ever really changed, while that bastion of the right, Fox News, views it as another clear case of "flip-flopping."

Ah, the flip-flop. The first known use of the term as a political pejorative was recorded in The New York Times on Oct. 23, 1890, but it wasn't until the 2004 presidential challenge between Bush and Kerry, when the battle lines between right and left were drawn more sharply than ever before, that accusations of flip-flopping became one of the most highly prized weapons in the American political arsenal.

To be accused of a flip-flop is not good, for the flip-flop is generally more than the suggestion that one has suddenly changed one's position on an ideological issue or a matter of policy. In its most effective usage, the flip-flop denotes hypocrisy; the flip-flop means that one lacks integrity as a politician and as a human being. The flip-flop cuts deeper than a mere critique of one's politics. It is a moral impugnment, almost always issued by those whose code of ethics was first set in stone on Mt. Sinai and remains just as fixed and static today.

The only problem is, human beings are not static or etched in stone.

To paraphrase the greatest visionary of the 20th-century Catholic Church, Pierre Teilhard de Chardin, there are two types of people in this world: those who believe in evolution, and those who don't. And "evolution," as Teilhard used it, is an all-inclusive concept -- not just the Darwinian evolution you learned in biology class (unless you went to school in Kansas), but an evolution that applies universally, suggesting that nothing is exempt from the winds of change. Art, morals, economics, politics, values, religious beliefs, science, and even entire cultures can all be seen, from this perspective, to have their own evolutionary trajectories over time.

Of those who don't support the possibility of this kind of universal evolution, it's often (but not always) because they're entranced by what my colleague and mentor Carter Phipps calls, in his new book Evolutionaries, "the spell of solidity" -- a deep, unquestioned, subconscious conviction that both reality and human nature are fundamentally static and unchanging. And if you believe that reality essentially consists of fixed, set, already-defined parameters, then the suggestion that someone's most deeply held beliefs could genuinely change, that a person's moral convictions or ideological paradigm could legitimately evolve over time, isn't going to sit well within your rigid, either/or worldview. 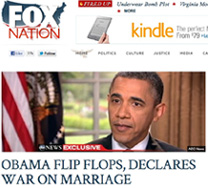 To your eyes, such an "evolutionary" proposition would be violating the very nature of reality and truth, particularly when it concerns an issue with such heated moral and religious implications as same-sex marriage. If such a deviation from the established order of things came from the lips of the President of the United States of America, you probably wouldn't be surprised (you didn't vote for him, after all), but you might well throw up your hands and despair that the world is going to hell in a handbasket. Witness Fox News's characteristically dramatic headline: "OBAMA FLIP FLOPS, DECLARES WAR ON MARRIAGE." They later toned it back, settling instead for a stripped-down flip-flop assault against the commander in chief ("OBAMA FLIP FLOPS ON GAY MARRIAGE"), but the post accompanying the headline made their position on the matter clear.

In the post, the new video (May 2012) of Obama fully endorsing the right for gays to marry is contrasted against an October 2004 video in which he addressed the topic of gay marriage, stating plainly that "marriage is between a man and a woman." There are just these two videos, illustrating a dramatic shift in perspective -- a black and white shift, really. Night and day. A clear and unequivocal flip-flop of the worst kind.

But compare that to the more progressive New York Times and their video gallery titled "Obama's Evolution on Same-Sex Marriage." There are eight videos, representing the gradual development of Obama's views on this matter over time, and providing persuasive evidence of his stated "evolution" (despite the cynics' claims that he'd secretly held the same position all along and is only now coming clean because it's politically convenient). The videos span October 2004 ... to February 2007 ... to August 2008 ... to June 2009 ... to December 2010 ... to June 2011 ... to September 2011 ... to May 2012.

Watching the clips, it's clear that his perspective does indeed flip-flop, subtly, over and over again -- but it's a developmental kind of flip-flopping, building, growing, and expressing more nuance and political clarity as the years roll by. The videos depict a series of not-so-random mutations, culminating in a perspective that's more expansive, inclusive, and definitively new. It isn't the stark, absolute change of mind displayed by Fox News. But even if the change in Obama's stance had been that dramatic, would that have been a bad thing?

Only in a static worldview is moral evolution looked upon with suspicion and alarm. After all, a man has his principles and should stick to them, right?

The Times again, reporting on the response of Obama's likely opponent in the 2012 election, Mitt Romney:

"He previously said he opposed same-sex marriage," Mr. Romney said when asked whether the president's "evolution" on the subject meant he was inconsistent. "You'll be able to make that determination on your own."

If your worldview doesn't admit the possibility of evolution, then this kind of flip-flopping will indeed seem inconsistent to you. But if you're an Evolutionary -- someone convinced that the fundamental nature of life is fluid, dynamic, and ever-evolving -- then a continual process of developmental flip-flopping is the only kind of consistency worth trusting.

__
A version of this post was originally featured on The Evolutionary.