According to the National Alliance on Mental Illness, 58 million adult Americans suffer from mental illness in any given year, and that number is growing. In 2013, an estimated 15.7 million adults had at least one major depressive episode (ranging from mental depression to physical suicide and even murderous attacks on others, including their own families) in the past year, representing 6.7 percent of all U.S. adults. Annually there is "Serious mental illness (that) costs America $193.2 billion in lost earnings per year."

The statistics are even more shocking for anxiety disorders, with 28.8% of the population reporting a serious episode within the past year.

Common psychiatric mood disorders, such as anxiety, depression, and insomnia, are the result of trauma in the deep structures of the mid-brain associated with neurochemical imbalances. 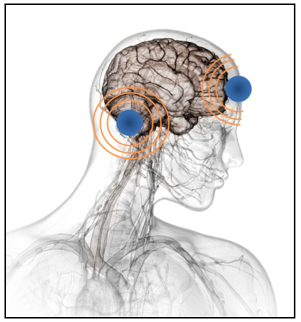 Cognitive behavioral therapy, or "talk therapy" has inconsistent, unproven results, and treatment is rarely completed by the patient. ECT has been shown to quickly reverse symptoms of certain mental illnesses, but is costly and can often involve a lengthy recovery period and various side effects.

Most treatments for mental illness address the symptoms of the disorder, rather than the underlying issues, keeping patients dependent on medications that do not work.

Every day, more patients are becoming infuriated at their lack of improvement, and are demanding better, more effective alternatives to pharmaceuticals. Fortunately, a growing demand in the market will inevitably lead to advancements in science and technology

Scientists are discovering more about brain health and functionality, and learning how to target and treat the specific areas in the brain where mental health disorders originate. With investors now taking an interest in finding effective treatments that directly target the brain, medical and psychological innovators have started to make huge strides towards finding viable alternatives to traditional treatments.

For example, at the forefront of such attempts is Nexalin Technology Corporation. Technology has started to gain a lot of attention as the provider of an FDA-cleared treatment for anxiety, depression, and insomnia that boasts no serious side effects, no medication, and no recovery time. Nexalin utilizes a new patented waveform that electrically stimulates the mid-brain, effectively resetting the hypothalamus and correcting neurochemical imbalances without the use of pharmaceuticals. "Hacking the Hypothalamus: New Techniques in Treating Mental Illness."

In terms of humans, that is usually no bigger than an almond, by which our hypothalamus exerts quite a lot of control over our daily lives. Located in our brain just above the brain stem, our hypothalamus regulates the nervous and endocrine systems -- i.e., our hormones. Metabolism, circadian rhythms, even our ability to form attachments with other human beings are directly influenced by what is going on in our hypothalamus.

As a result of this tiny organ's incredible power, it has long been a topic of study by neuroscientists trying to figure out the source (and hopefully cure) of many mental illnesses. Depression, anxiety or Post-Traumatic Stress Disorder may not seem like hormonal disorders at first, but some scientists have nevertheless noticed that some of the common symptoms of these diseases (such as having an irregular sleep schedule or an unregulated appetite) tie directly to processes the hypothalamus is in charge of controlling human behaviors.'

Perhaps, the therapy goes, if we can alleviate the physical symptoms, such as an irregular sleep schedule, the depression will go with it.

Sound implausible? Maybe not. Some initial studies have used Cognitive Behavioral Therapy to treat the insomnia which has often been seen as a symptom of depression.

The results of such studies indicate we may be thinking about the relationship between insomnia and depression backwards -- perhaps the depression is the symptom, not the disease. Of course, in this era of life hacks and cutting-edge neural technology, some scientists aren't content with using techniques developed in the previous millennia.

What if, they wonder, it were possible to directly 'hack' the hypothalamus in people displaying the symptoms of hormonal disruption? Instead of using drugs (with their myriad of side effects and dubious efficacy), or the time-consuming nature of CBT, they want to go straight to the source. Scientists have known for quite a while the effect that electricity has on the brain, and Electro-Convulsive Therapy has proven to be an effective (if dramatic) treatment for severe depression. Nexalin's methods operate on a similar principle, but in a far more targeted a manner.
Rather than disrupting the entire brain and it's functioning, Nexalin directs a more focused energy, targeting the mid-brain structures associated with the specific symptoms. At the forefront of such attempts is Nexalin Technology. Nexalin uses a frequency and a new waveform technology to deliver a mild "undetectable" amount of energy to the brain - including the hypothalamus.

Though full studies have yet to be conducted, the FDA has cleared the technology for use on humans.

The many passionate, inspiring testimonials piling up on the Nexalin website indicates that the creators of Nexalin may be onto something. The technology is currently under study at the University of Pennsylvania, and many neuroscientists look forward to the new insights such a study promises to deliver!

Vice President of Nexalin, Mark White, explains, "Although cranial stimulation has been around for many years, it's taken the support of investors to truly understand the value of this technology and take it to the next level." Investment Banker Randall Letcavage and a group of investors acquired the technology and patents, restructured the company, and brought in significant financing for research and development. Letcavage took a hiatus from a thriving investment banking business to become the Chairman and CEO of Nexalin. The goal is to create a scientific model that supported and validated the hundreds of passionate testimonials from Nexalin's patients and bring a solution to the medical community. Letcavage puts it simply "we want people to get better."

Clinical research indicates that normalization may begin as early as the initial treatment, and on average, patients report 70% sustained improvement of all symptoms, a statistic that dwarfs pharmaceuticals in terms of efficacy. "We believe we have cracked the code, and found the right combination of frequency and waveform that allows Nexalin to reset traumatized networks in the brain," says Letcavage.

Nexalin is a proud sponsor of Anna Judd and her efforts to raise awareness of veteran related issues including anxiety, depression and insomnia. For her run across America, she left Venice Beach, California on March 22, 2014 and arrived in New York City on August 23, 2014. She ran for an average of 30 miles a day, with Sundays off for a total of 156 days. She carried 22 rocks in a backpack to symbolize the number of veterans who commit suicide each day.

To learn more about Anna's run visit http://annarunsamerica.com/
For more information regarding Nexalin, including providers near you, please visit www.nexalin.com. If you are a medical professional interested in learning more, please call (714) 258-8004.

Economist for environment and renewable energy