People often ask us where we think the film industry is headed, next. And since we have made one whole movie before, we are definitely experts. Now we're finally ready to unleash the wisdom we have accrued during our several months of professional movie-business being-in-ness. Behold!

IN THE FUTURE, AND BY IN THE FUTURE WE MEAN STARTING FIVE YEARS AGO, ALL MOVIES WILL BE BASED ON EXISTING PROPERTIES. We ourselves just finished a movie based on a beloved children's book that had only a few paragraphs of text! No, not Where the Wild Things Are, the other one. But don't worry -- not every movie will be based on a book, graphic novel, toy, old movie, or TV show; some will be based on old board games, brands of cereal, or types of paper. There will be more movies based on Broadway musicals based on movies, but fewer Broadway musicals based on movies based on musicals. For a sneak peek at a few projects in the works, check out this honest to goodness real development report we rescued from the paper shredder at a major Hollywood studio: 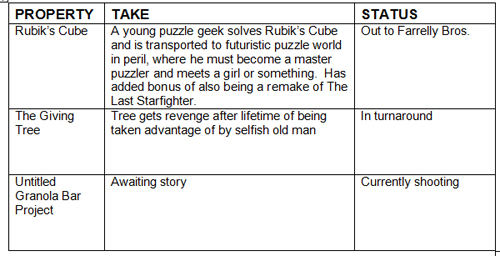 AVATAR WILL REINVENT THE LANGUAGE OF CINEMA

"Avatar" will forever change the way movies are made. This is true.

However, instead of more movies that seamlessly blend live-action and CG or use the camera to immerse you in a stunning 3D world, there will be more movies about blue aliens that ride around on dragons.

3D IS HERE TO STAY. Filmgoers will pay a premium to see movies in 3D, and the 3D theaters sell out sooner and more often than regular theaters. New technology is coming to bring 3D to your home theater and your computer and your phone. And who doesn't want to wear awesome polarized sunglasses every time they look at their phone?

Still need convincing? Imagine how much more awesome "Bright Star" would have been if it were coming at you in three dimensions. Bam.

STUDIO CONSOLIDATION. Since all the studios are owned by parent companies that make stereo systems and trash compactors, no one's super interested in risking lots of money right now. A lot of the studios will be shrinking in scale and swallowing each other up. Eventually, as in all capitalistic ventures (Coke and Pepsi, Microsoft and Apple, Transformers and Go-Bots), there will only be two major studios, which will be called Disney's Paraversal Bros. and Foxony. On the plus side, anyone laid off of a film production will be put to work making dehumidifiers.

NEW REVENUE STREAMS WILL REPLACE LAGGING DVD SALES. Studios will follow the example of the music industry, and generate revenue through large stadium tours. Classics like Jerry Maguire will be played on enormous jumbotrons, with the original actors performing their dialogue live. Deleted scenes will be reimagined as elaborate ice skating spectaculars, and end credits will be produced in an exciting, live "high school graduation" format, in which every member of the crew arrives on stage one by one to increasingly fatigued applause.

INDEPENDENT MOVIES WILL HAVE A SECOND RENAISSANCE. Finally some good news! With new, inexpensive HD cameras and user-friendly editing software, a generation of exciting new voices will be able to make professional-quality films, and truly independent movies will pop up from all over the world. Most of these will be long-form YouTube videos about cats.

MORE ANIMALS WILL WEAR SUNGLASSES. You've already seen sunglasses on dogs, cats, kangaroos, and chipmunks. But you haven't seen them on komodo dragons or seabass. You will. In the same movie.

SOMEONE WILL FINALLY MAKE A BILLION DOLLAR MOVIE. It will star digital versions of the Beatles and be shot using 3D underwater motion capture technology. Effects work will be done entirely on the moon. The epic story will be based on the full line of Mead stationery products. It will make two billion dollars.

AN ANIMATED FEATURE WILL FINALLY WIN THE OSCAR FOR BEST PICTURE. That movie will be Madagascar 3, the second act of which will be an extended Black Eyed Peas video.

35 MM FILM PRINTS WILL BE REPLACED BY DIGITAL PROJECTION. From now on, all filmmaking will be done by computers. Especially the writing.

Chris Miller and Phil Lord are the writers and directors of Cloudy With a Chance of Meatballs, which is based on an existing property, can be seen in 3D, and cost a billion dollars. Cloudy opened number one at the US box office two weeks in a row, the only animated feature to do so this year. As of this writing, it has grossed $115 million dollars at the domestic box office. You should totally go see it. It's a real gas.