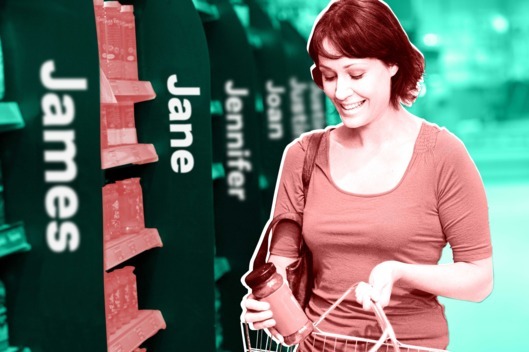 Your friend has cut out sugar and feels amazing as a result. Another friend, on the other hand, is on what sometimes appears to be a strict all-candy diet and still stays perfectly healthy and trim. And you have tried both of these dietary tactics and have seen no real changes in your own body.

The same could be said for dairy or carbs -- whatever the nutrient may be, you likely know from experience that just because some eating habit works for somebody else, that doesn't necessarily mean that it'll work for you. Everyone's body is different, of course, which means everyone's body responds to food a little differently. And this, some scientists across the globe are now arguing, points to the potential future of healthy eating. The key to fighting the increasing threat posed by diabetes and obesity may be personalized diets -- that is, eating plans tailored specifically for each individual -- instead of the generalized nutrition guidelines we have now.

The answer is in your gut -- more specifically, the trillions of bacteria currently residing there. Two of the scientists currently studying the interaction between the gut microbiome and diet are Eran Segal and Eran Elinav, the biologists behind the Personalized Nutrition Project in Tel Aviv. Preliminary results from their research, presented earlier this summer at the Human Microbiome conference in Germany, suggest that a computer algorithm can predict how individuals' bodies will respond to certain foods, thus creating a tailored meal plan for each according to his or her own unique bacterial profile.

This project began more than two years ago and has so far included more than 1,000 people. Segal and Elinav first instructed their participants to wear glucose-monitoring devices, which measured and recorded their levels of blood sugar every five minutes for a week; they also used a mobile app to record what and when they ate that week. Altogether, they collected data on more than 50,000 meals and snacks, plus how each person's blood-glucose levels responded to each food.

Your gut converts the food you eat into sugars, which are subsequently released into the bloodstream; from there, these sugars are either converted to energy or stored away as fat. Certain foods cause too much sugar to flow into the bloodstream, and this too-high level of glucose in the blood is what can lead to things like diabetes and obesity. But what foods do this? This is part of the point of nutrition guidelines, to recommend the foods least likely to cause this potentially dangerous spike in blood glucose.

But from their data, Segal and Elinav could see that the people in their study were responding to similar foods in wildly different ways. "Already, we could see at a very large scale that, indeed, for any food we looked at, we could see a huge variability in the response," Segal said. "Some people, you give them sugar and they have a very faint response -- even to pure sugar. Whereas others, they have a huge response. And this holds for basically every food that we examined." And there were more surprises. "Some individuals, they eat whole-wheat rice and their blood-sugar levels remain low, and when they eat ice cream they spike," Segal said. But for others the results showed just the opposite. Related: Diets Are a Lot Like Religion

Theirs is not the first study to find an individualized response to similar foods. Studies of twins, for instance, have shown that even people with identical DNA sometimes respond differently to the same diet. And so these results, the researchers argue, suggest "that a universal diet, or universal guidelines, they could never work for everybody, because people are different," Segal said. "General guidelines are going to have limitations, and they might actually be bad for some people."

But why might this be the case? Segal and Elinav thought that if they could understand the underlying mechanism that might explain these differences in reactions, they could possibly learn to predict them. Their investigation takes a turn here into the gross: They took stool samples from 800 of their participants, sequencing the genes in each person's DNA, and used this to complete profiles of the bacterial composition of each individual's gut. (Basically, they knew that a particular gene is present in a particular type of bacteria, so if they found that gene, it means that bacteria is present, too.) They combined this with the records on their glucose responses to certain foods and used the two data sets to create a computer algorithm, which would create a list of foods that would not trigger that spike in blood-glucose levels.

To investigate the algorithm's accuracy the researchers started the study that would later be presented at the Human Microbiome conference. They used the algorithm to tailor diets for 25 individuals, all of whom had high enough blood-sugar levels to be considered prediabetic. Some of the foods included on the "approved" list were not exactly the foods you might expect. "For some people it included chocolate, ice cream, pizza -- things a dietitian would not prescribe," Segal said. (Plenty of others didn't, of course, and stuck to things like whole grains or veggies.) For one week they ate according to their personalized food plan; the following week they ate a diet that was similar in total calories consumed and was in line with more typical dietary guidelines for prediabetics. After the week following their personalized diet, fewer individuals experienced those spikes in blood glucose when compared to their week on the standard diet; some of them even saw their blood-sugar levels dip back down to healthy levels.

It's an intriguing finding, though very much still a preliminary one. More research needs to be done involving many thousands more people, who are followed for a longer period of time, before anything becomes definitive or clear. And it's also worth noting that other scientists working on the link between the gut microbiome and diet are skeptical of the notion that this research will eventually lead to eating plans tailored for an individual person. Jens Nielsen, a biochemical engineer at Chalmers University of Technology, believes that it's more likely that this research will eventually lead to groupings of people, categories of individuals who respond to particular foods in similar ways.

Related: I Tried Taylor Swift's Diet...and It Was a Joy!

Nielsen is co-author of a study published last month in the journal Cell, which found that people with more diverse populations of gut bacteria are healthier even if they are overweight, when compared to people with less diverse bacterial profiles. Within a decade or so, Nielsen expects that his work may be applicable to weight loss. He's currently working on the inverse of this problem, investigating the microbiomes of children in developing nations who simply cannot put on weight, even when eating foods expressly designed to help them do so.

And Segal and Elinav expect their work, too, will one day be made available to a wider group of people interested in a personalized meal plan, though, again, the practicalities here are undeniably unpleasant. (Musing on future applications of their work, Segal and Elinav could see a world in which it becomes mainstream to mail stool samples into the lab to get diet advice.) We're still many years away from that, but the more these researchers look into it, the more individual differences they find, each discovery undermining the idea of blanket nutrition guidelines a little further. "The entire nutritional paradigm we all base our decisions on in our study is proven to be at least partially wrong," Elinav said. "So we are shifting the paradigm to individuals." More from Science of Us: I Am Training for a Marathon. So Why Am I Getting Fat? Women Who Show Anger Are Taken Less Seriously Why Your Favorite Brand Is Like a Friend Why Men Always Think Women Are Flirting The Psychological Case Against Tipping

More:
Diet And Nutritionhealthy livingNutritionbacteriadiets
Newsletter Sign Up
An essential daily guide to achieving the good life
Subscribe to our lifestyle email.
Successfully Subscribed!
Realness delivered to your inbox