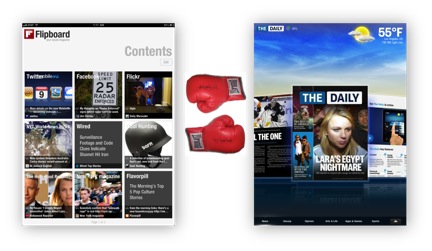 Taking a stance on Flipboard vs. The Daily, two iPad applications which supply news content to their audiences, highlights the friction between old media and new and distinguishes the ways two companies are bringing information to users. Flipboard is a social magazine launched in July 2010 by Mike McCue and Evan Doll touted by Apple as iPad App of the Year and one of TIME's top 50 innovations of 2010. The Daily launched in February 2011 by News Corp., designed to be the first iPad-only newspaper. 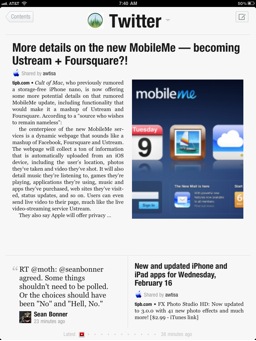 "Flipboard is the 'platformifiication' of publishing, open to anyone who wants to publish through it. The breadth of content available trumps the quality of individual pieces of content, with the experience being different for everyone that uses it. The Daily is 'magazines as medium,' and is a literal interpretation of what the future of magazines can be - a multi-dimensional interpretation of a formerly two-dimensional edited, curated document."

In the days of the newspaper, the news editor was king, culling together a meticulously curated product from the ranks of the professional journalist. In the new era of social media, the control of content has shifted from 'professional' to everyone. Twitter, on the short form, and blogs on the long form have empowered the masses to become an army of content creators. Flipboard simply aggregates this new army of content creators to create a new breed of broadsheet. If my broadsheet could speak to me, what would she say? Well, she would most likely say something different minute by minute as the news developed. Flipboard fulfills this promise creating a lean back experience of news that has been curated by both the reader and their amalgamation of friends and contacts.

The Daily, on the other hand, is a traditional newspaper that has been re-packaged simply for an iPad product. One issue is delivered and served with the sections you've come to expect from a traditional newspaper. No personalization. No curation of the masses. This difference evokes the glaring friction traditional media has been battling with for so long: ceding control. Content creators no longer require journalism school or fancy degrees. Recognizing this is the secret sauce of Flipboard. Ignoring it is the Achilles Heel of The Daily. 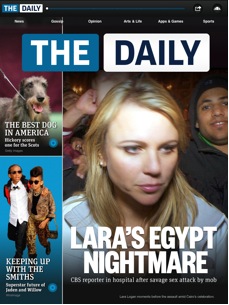 Here Flipboard could potentially fall flat much like Twitter. If not carefully managed, a Twitter feed can become a garbage can of ridiculous comments. Flipboard allows the user to pick the inputs from Flavorpill to the NY Times. If a user selects only entertainment outlets, the experience will be limited to that information removing the possibility that the budding protests in the Middle East will make their way through. In this way, Flipboard's ability to present information is only as good as the human programming it.

On the flip, The Daily is collected and published in one edition and experienced as such by all users. Flipboard is Pandora. If you decide at some point that you no longer like the blues, some energy is required to remix. The Daily is radio, a controlled stream of content programmed by a few. I worked in radio. We DJ's lie to you all the time about playing requests. Doesn't happen. 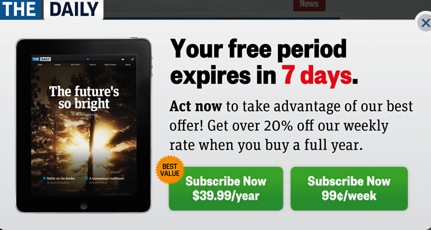 In typical Murdoch fashion, the price is immediate even before the quality of the content has been proved out. This is all ego and the central differentiating feature again between old media and the start-up community. Start-ups focus on the user experience almost with little to no focus on how they will prove out revenue-positive results. Traditional media focuses on how to glean immediate profits before asking consumers if they like the experience. There must be some middle ground here to prove out a valuable experience for the reader with content that is being subsidized by advertisers. Newspapers once had the stronghold with this strategy but eyeballs shifted to new platforms. The advertising dollars must shift with those eyeballs.

Flipboard represents a revolutionary way to consume news. The simplicity of the thinking is this: extend the aggregation of news outside professional editors and customize that curation by user. The end links could be the same. For example, my friend may post a link to a Wall Street Journal article which would be curated through Flipboard. Same as reading the WSJ? No. In this case, the WSJ was hand-selected by my friend for some reason, elevating its status like a highlighter elevates text. No one wants to think his or her job is not specialized. Flipboard makes us all editors which empowers us all.

"I'll bet on 'produced' content any day. Right now, everybody aggregates the news, but few are producing. This is where The Daily stands out. It's early, everybody is learning, but Murdoch took the right approach... conceived from the users point of view, not trying to squeeze a newspaper onto a 9 inch screen."

While I surely respect the content producers out there, I raise one eyebrow to the News Corp. controlled view on how that content is manufactured. The very site I am writing for now (meta) innovated by allowing a mass of writers to create content underneath the Huffington Post brand. They extended the access to information simply by ceding some control and empowering an army of additional writers, writers who simply create content without payment because they are passionate about their message.

The Daily continues with the control traditional media clings to. Control the message. Control the power. Too bad the power already ceded to the community a long time ago. Democracy isn't just for Egypt any more kids. The news is now ours to create. Move over Wolf Blitzer...