As America's National Park Service celebrates its centennial this summer, we have a responsibility to create a vision for the next century that focuses on the importance of public lands for all Americans.

Last week, I joined a first-of-its-kind coalition of civil rights, environmental justice, conservation groups and community leaders and activists from across the country - comprising 30 organizations - in unveiling this vision and urging President Obama to ensure national parks and other public lands are more welcoming, representative of all communities. 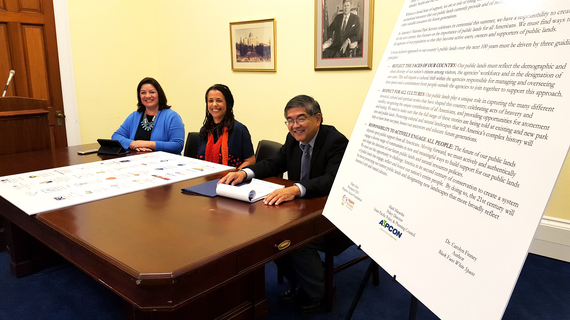 Our public lands -- including national parks, forests, monuments and other areas -- are a jewel in America's crown, the envy of the world and have played an important role as part of America's identity. Unfortunately, these lands have not always been reflective of our country's demographic and ethnic diversity. This disconnect is becoming more apparent as the face of our country continues to change at a rapid pace and more urgent because the future of our public lands will depend upon public support from all Americans.

There have been some positive steps in establishing places that start to share the Latino story and history. César E. Chávez National Monument in California celebrates the Latino leader and ensures that younger generations can continue to be inspired by his story. The San Gabriel Mountains National Monument located in Los Angeles' backyard is a source of recreation and spiritual connection - many local Hispanic churches perform baptisms in the river. Organ Mountains-Desert Peaks protects land in New Mexico that will allow for Latinos to experience and share cultural and historical significance for generations to come. And even through my travels to national parks and public lands throughout the country, I've met more Latino park rangers than I would have 10 years ago.

However, our public lands are facing pressure in Washington, D.C., where some members of Congress would like to sell them off -- and strip the President of his authority to protect our existing national parks and monuments or to create new ones. These attacks are happening alongside increasing commercial and energy development, which is putting pressure on our public lands and threatening valuable historical and cultural treasures. Across the country, many of our communities have too little open space; and climate change, air and water pollution are risking our families' health and our future.

Without a broad base of support, we are at risk of losing the historic, cultural, natural, spiritual, economic and recreational resources that our public lands currently provide and of missing opportunities to identify and conserve other valuable resources for future generations. We must find ways to engage all segments of our population so that they become active users, owners and supporters of public lands.

After months of discussions, debates and analysis, the coalition released its policy brief, which identifies five areas of focus with suggested actions to encourage our federal land management agencies to adopt a more inclusive approach to the conservation of our shared natural and cultural heritage. These include 1) Access to public lands; 2) Historical, spiritual, sacred and cultural preservation; 3) Landscape-scale conservation; 4) Stakeholder engagement; 5) Workforce diversity.

The conversation on inclusion won't be easy. It'll be uncomfortable. But, a thoughtful dialogue is necessary as our nation's demographics continue to shift and the threats to our natural resources continue to mount. Undoubtedly, there are going to be detractors who will seek to leverage veiled racism in thwarting or deflecting a greater effort to embrace all communities of color in the future of our nation's parks and public lands.

By 2020, half of all youth in America will be of color. The Census Bureau predicts that by 2043, a majority of our country's residents will be people of color. Yet an Outdoor Foundation study found that 73 percent of Americans who participated in outdoor activities in 2014 were white. The nation's changing demographics, coupled with the threats of climate change, increased energy development and partisan attacks on clean air, water and public lands, requires the urgent engagement of all Americans in the use and protection of the nation's national parks and other public lands.

By issuing a Presidential Memorandum on the Centennial of the National Park Service on August 25, 2016, President Obama can encourage federal land management agencies to reflect the demographic and ethnic diversity of our nation's citizens; respect the historical, cultural and spiritual stories and unique contributions of all Americans; and actively engage all people.

If you would like to share your support for creating a diverse vision for our nation's parks and public lands, please sign the coalition's petition on Change.org.