Imagine that the internet is a lake. Its levels continue to rise as it grows bigger and bigger. Each social internet giant (Facebook, Twitter, WhatsApp, Kickstarter, etc.) is a speedboat in this lake creating constant waves. Watching the yearly statistics of social media is like watching these waves chaotically spread throughout the entire lake generating incredible change and dissipating just before they reach the edges.

The number of global internet-users has a 7.6-percent year on year growth rate. This lake gets bigger and bigger, there's constant movement in the water, almost nothing stays stagnant and the trends of the web spread far and wide. Anybody that uses internet on a daily basis is effected by what takes place, and we are all forced to adapt to the changes it brings to our social culture if we are not the ones creating the change ourselves. Let's look at the stats:

As CEO of a social mobile app platform,
Shout The Good
, these trends are fascinating to watch. The current trends of its use lead me to believe that the future of social media and this growing lake of users will force all of us to a higher ground that's focused around the psychology of human behavior.

If social media was polarized on a scale of sentiment - positive or negative - where would the majority of its users fall? On one end we have internet trollers, hacking thieves, and cyber-bullying. On the other, we have uplifting campaigns built for humanity and social good, or we could look at the continually growing self-help movement. How does this effect us?

Social media is not so new to our livelihoods. Messaging platforms powered by the latest available technology have existed since the start of the Internet. Though, its rapid growth has changed human behavior in ways we've never seen before.

Everyday individuals can jump on a soapbox and have the potential to reach millions in just minutes.

These numbers are from a website that shows the internet in real time. This is the data of a 2-minute time period on a Tuesday morning.

At Shout The Good, we wonder and attempt to find out how much of this distributed content is positive.

Research finds that these latest "social good" trends are leading to a kinder, gentler generation of users. New tech is now almost expected to be making a "social impact" for good.

The Millennial generation has honed in on finding ways to use this soapbox to raise awareness on issues and generate impact. According to Sarah Sladek, author of Knowing Y: Engage the Next Generation Now:

We see it in our newest companies on the rise. The next generation demands business that makes positive impact. They demand digital media content that has a purpose. They engage with campaigns with higher purpose.

These are only a few examples of the buzz around the importance positive social impact.

The next generation is craving ways to be a part positive change. Social media and technology are amplifiers helping them actually do it. Though, with all of the negativity that still exists on the web, there still needs to be a driving force against it that supports positive impact and hones in on the importance of character building in that process.

In recent years we've seen a huge rise in the positive psychology, self-help, and happiness driven movement. The movement is based around idea that we cannot always rid ourselves of our miseries, but we can still become happier by positive cognitive therapy.

Psychologist, author and educator Martin Seligman helped develop the ideas behind the VIA Character Institute, which provides a character strength test that highlights the strengths of each individual. According to this philosophy, self-awareness of our strengths gives us confidence that helps us want to in-turn help others find theirs.

In this test there are 24 character strengths narrowed down into six categories: 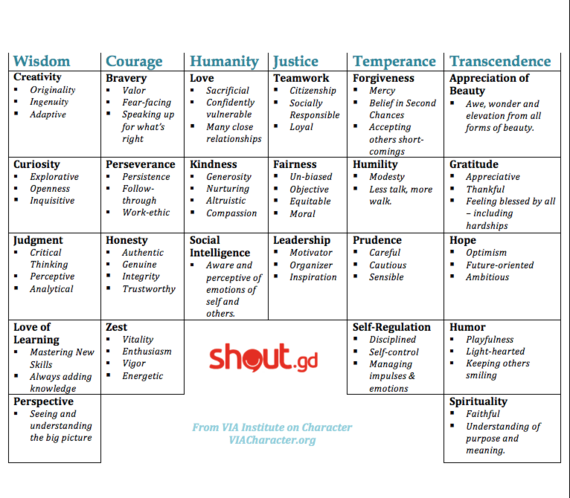 So here's what we've come to as facts: The trends of positive psychology and social impact are flourishing to a generation craving engagement. Social Media is only growing larger and larger by the second because of its addictive elements. The instant feedback the internet provide creates a drive to seek out more of it.

So what's next in digital social trends? Can Social Media create habits of positive engagement to translate into real world behavior?

While internet trolling, cyber-bullying, etc still exist along with all the good that is happening through Online Social Media, Shout The Good is just one of the many new platforms that encourages a focus on positive lifestyle and I am positive that this will continue to grow and outweigh the negative impacts of an increasing digital life.